* Note: The fan account may contain spoilers, so if you wish to see the cri show for yourself, you can choose not to read this. Also, this is based on memory and hence not a comprehensive and detailed account.
** Pic credits as tagged and from various news articles 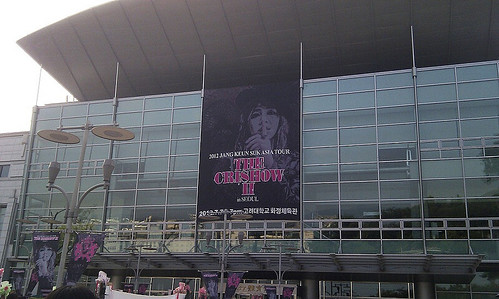 Seoul’s summer is expected to be hot (30 – 32 degrees Celsius), but it had been raining continuously for a few days and (luckily or unluckily) Saturday 7 July turned out to be a hot summer day. As usual, this did not stop hundreds and hundreds of eels from queueing frenziedly for their official membership gift, official member cri show gift or the official goods sale. 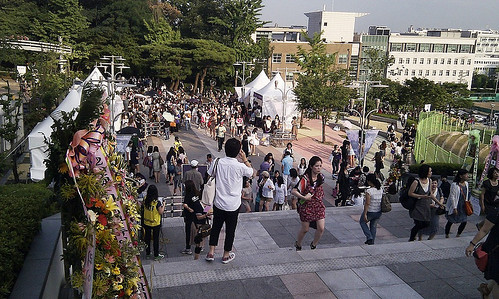 Those of us who were there were all sitting scatteredly throughout the hall, and I was by myself in the last 2nd row from the back, but I was satisfied with the clear (though not fantastic) view of the stage. I still had to look at the big screen most of the time to see a close-up of JKS. Below is the stage directly in front of me. 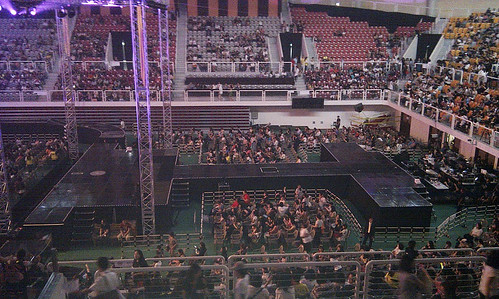 Stage from my view 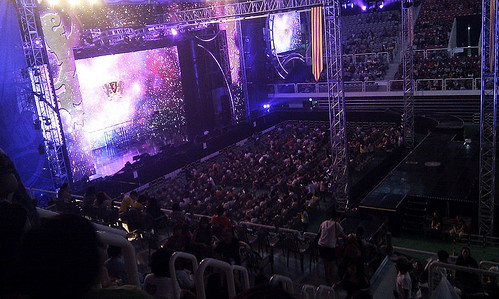 Stage from a more central view 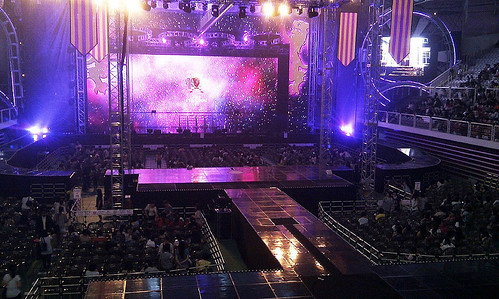 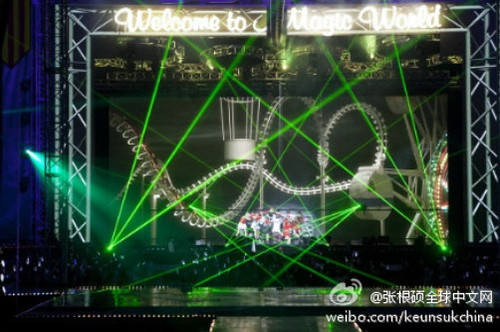 As this is the 1st show of 2012, I did not know what to expect; everything was a surprise ^^ The show started at 7.10 pm with a video introduction to the theme “Welcome to Magic World”, showing JKS walking through an amusement park devoid of people and looking at everything in curiosity. The videos interspersed throughout the show, to incorporate the theme and also to allow JKS time to change clothes, were of high quality (this is where some of that 20 billion won budget went to 🙂 ). For those of us who have imagined JKS in a vampire role, we need not imagine any longer. In one of the most striking videos which made my jaw drop, JKS, dressed in princely white, was in a room looking at his reflection in the mirror, and what he saw in the mirror is (I assume) the evil side of himself, which looked exactly like a vampire!! The vampiric JKS is so evil-looking, so devilish and yet so magnetic that it made all my hairs stand and I shuddered. I really want to see that video again!

JKS made a magnificent entrance in his grandly embellished purple outfit with that equally flamboyant hat perched lopsidedly on his head. He was singing “200 miles”. His voice was in rather good condition for the whole night, but my enjoyment of this song performance was marred by the fact that I could see JKS was distracted by his hat, and several times, he had to adjust his hat to keep it from falling off. And at the end of 3 songs, he was talking to the audience, and he just took his hat off and said something like, it was a bother, he might as well take it off. We laughed. 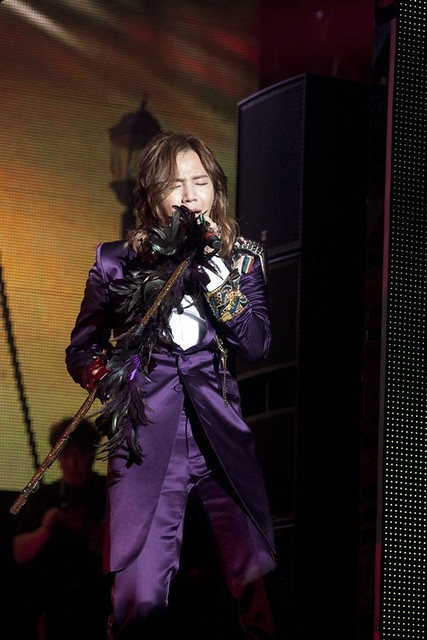 At this point, let me digress a little and talk about the audience and seats. As said earlier, I was in the 2nd last row from the back, and the last row was almost empty save for a few people. In fact, well into the show, I noticed that the last row (or even the last 2nd row) of each block on the third and topmost tier was mostly empty, and there were some empty seats in between some people too. Empty, when the tickets were all sold out. Empty, when a lot of fans could not get tickets. For a show that JKS has put so much effort and budget in, empty seats. I was disturbed by this. In the end, one possible explanation is that some tickets were bought by people who tried to sell it on the black market but failed, and so they gave away the tickets or just left the seats empty.

What’s worse, there were 4 men behind me (big-sized, muscular men type) who were obviously not fans. When JKS appeared in his purple outfit and that big hat and throughout his performance, they were sniggering at some points. Although I tried to concentrate on JKS and the screen, it quite destroyed my mood. They were a distraction, so I was happy when they left some 45 minutes into the show. The girl next to me was looking at her mobile phone throughout the whole show, being on twitter or some such thing. She barely looked up at the stage and sometimes, she would look up just to take a short video on her mobile phone. I glanced at the pics/video she was taking, but they were not close-up or clear. This is really irritating – if they are not fans, they should not even have come. If they attend any concert, out of respect for the performing artiste, they should not have walked out or played on their mobile the whole night. This is a matter of respect. If in Korea, JKS does not get the kind of respect he (or any other performing artiste) should get, it pains my heart. The splendid show that JKS has spent so much effort on, these people are treating it with disrespect and like a joke. I’m not asking that everyone has to love JKS, but if they are non-fans and yet attend a show, they should at least show respect or not come.

Ok, let’s forget all these annoying people and come back to the show. JKS sang many songs from Just Crazy album, Let Me Cry album and all 4 songs from Mary Me Mary. He also strummed a guitar for one song (forgot which). 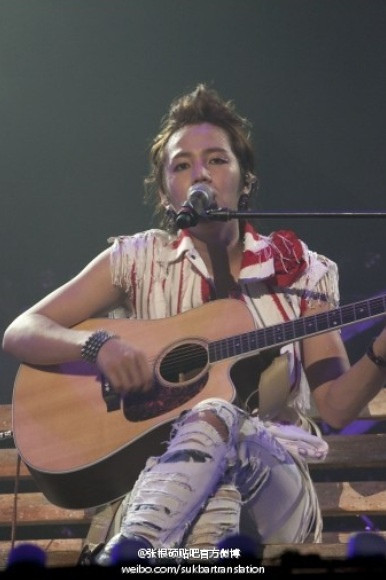 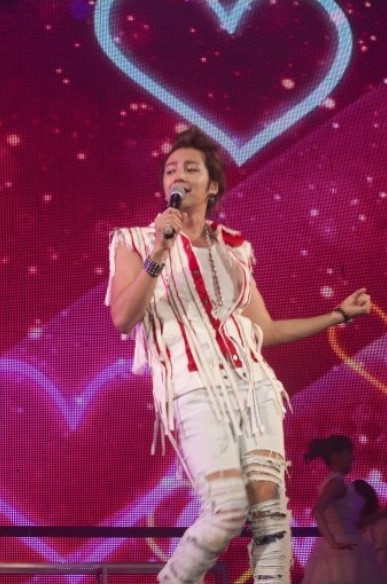 Since I couldn’t understand what he said, I shall just talk about his attire. When he appeared in princely white, white shirt with a transparent lace layer and lovely lace handcuffs, I think the audience collectively went, ooooh. He noticed our gasp of wonder/admiration too ^^ He looked so beautiful, so pure in white. The cri show showed JKS’ versatility in terms of image and music range. He can sing slow songs well, his voice clear and smooth, and at the same time, he can sing hot techno and rock songs and rock the house down 🙂 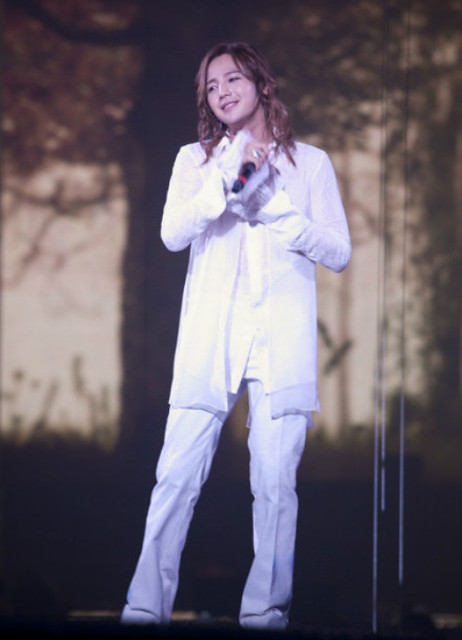 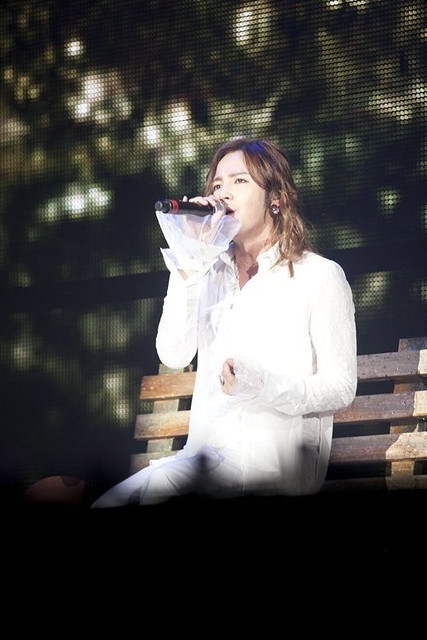 Needless to say, the visual effect of the show is stunning (again, the 20 billion won budget well spent) – no expense was spared in the laser, lighting and fireworks. The biggest, main LED screen on stage with its vivid colours created all the effects that we could have asked for. When JKS sat on the bench and sang a slow song, the background scene was of trees and drifting leaves. When he sang another song, the background screen was raining golden glitter. When he was standing on the metal frame steps leading up to the screen and singing another song, the background screen showed many many star lights swirling around him, it looked as if he was in space! 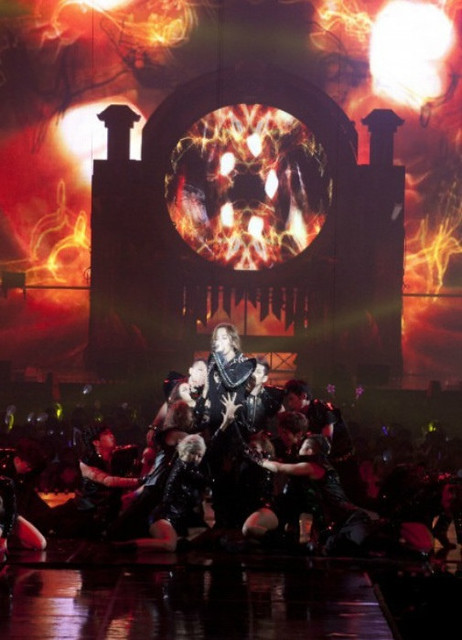 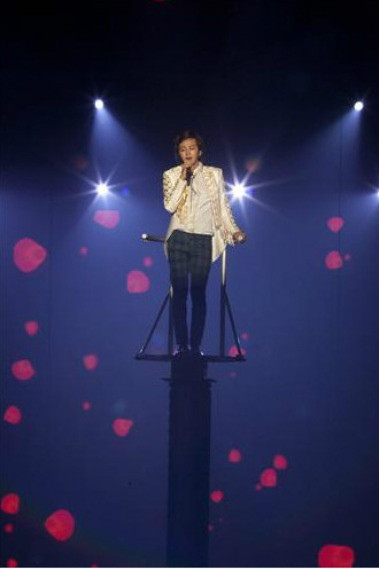 It was a solid 2.5 hour performance; we enjoyed all his songs immensely. For the encore part, JKS sang “Gotta Getcha”. I’m not a fan of Big Brother, but I must say, Lounge H song performance without BB is lacking in strength and power that this pair gives each other, so it was great when BB joined in for the 2nd encore song “Shake it”. And, did I hear that JKS plans to have a Europe clubbing tour and also a Lounge H tour? Ah…. I miss Lounge H 🙂 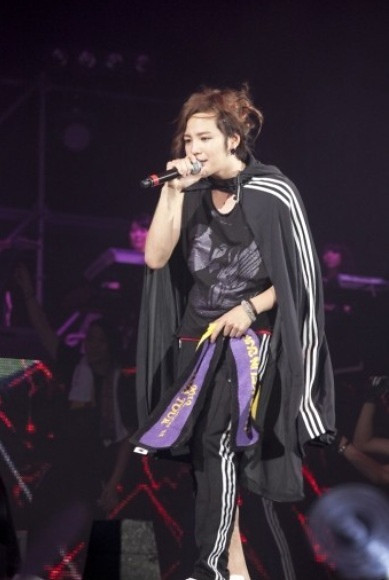 To me, the theme “Magic World” represents the world of JKS – a world where his curiosity and passion drive him to higher heights of performance (thus always wowing us with the novel things he’s up to) and also his self-development and self-fulfillment. Our Prince strives to be the World Prince by doing his best in everything, and he continually strives to challenge himself – he will create a world of his magic, where eels and people who appreciate him are drawn to him. As for the dark side of JKS represented by the “vampire” image, it may just be a contrast in the video to show theatrical effect, but it can also represent JKS grappling with his darker side. JKS is not merely a Prince, but he can also become a “devil”, which shows how flexible his image is and the wide variety of roles he can act. We know our Prince is herbivore by day and carnivore by night!

I shall end by showing pics of the 2012 official member gift that I got – a beautiful, purple leopard-print diary planner and the official membership card with its leopard print card case. If next year’s membership includes a gift too, it’s worth joining the OFC (official fanclub). Thank you, Prince, for the beautiful membership gift and the wonderful cri show! 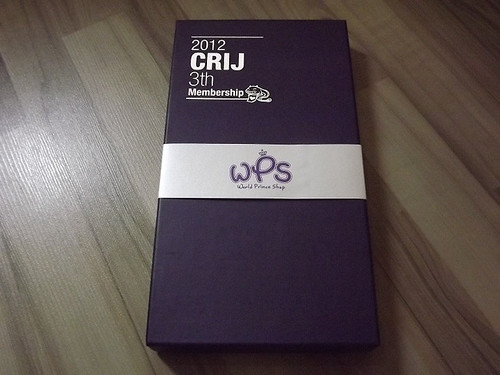 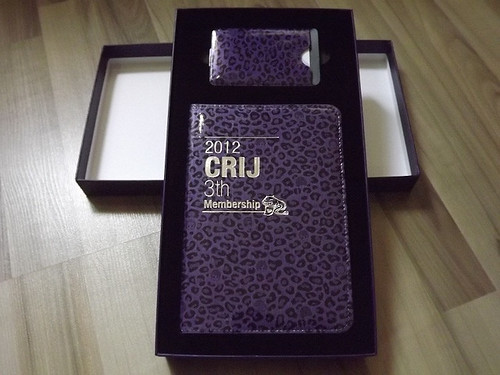 I love the pic of the smirking eel~! 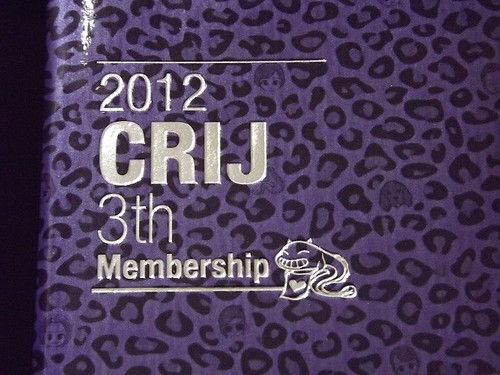 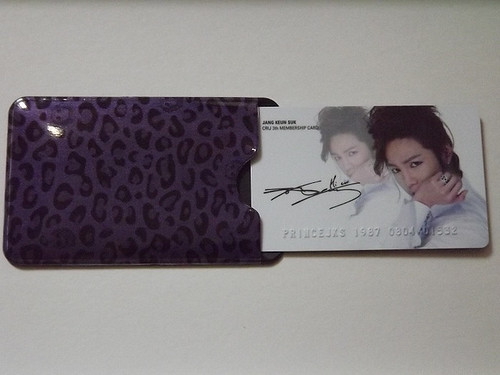 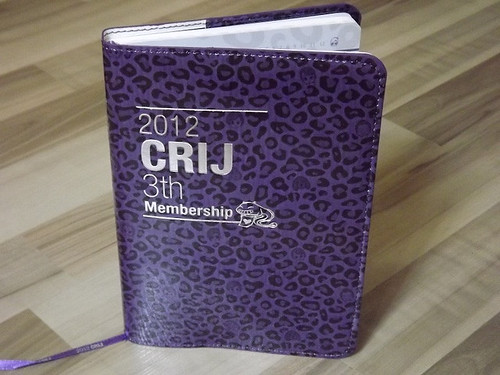 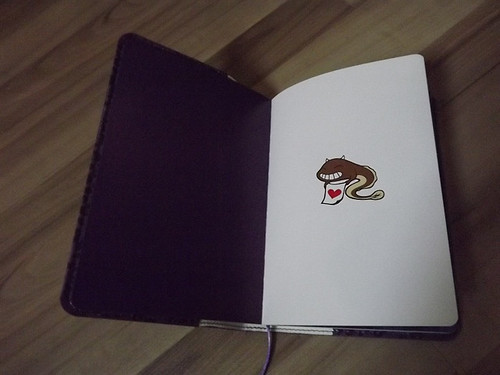 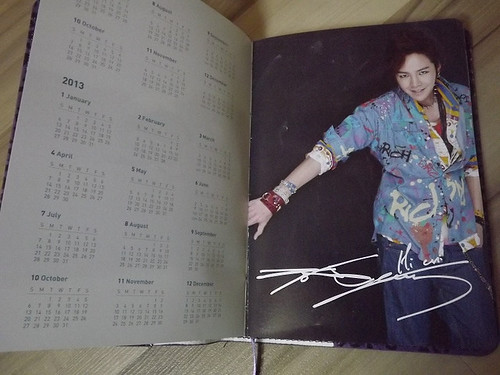 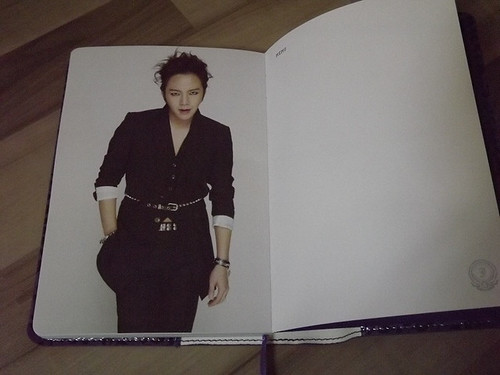 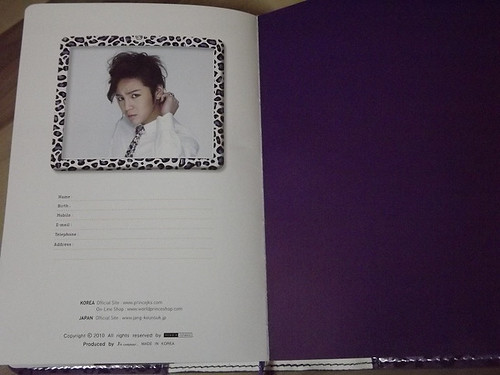