WARNING: Some spoiler of ep 12 may apply in this article. If you do not want to see, please do not click the link “Read rest of this entry”. We welcome all the comments and please share your thoughts too about Love Rain. Thanks. 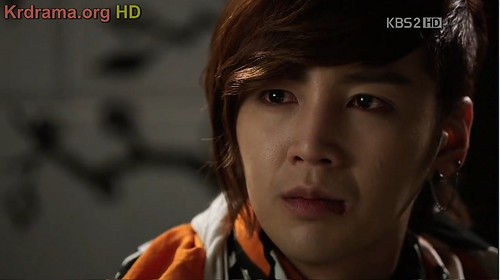 First of all, thank you for letting me share my thoughts on such a beautifully done and written yet utterly heartbreaking episode.

In a nutshell, this episode is where all conflicts, emotional and otherwise, begin. Joon finally finds out that his father’s first love is none other than Ha Na’s mom. And as the reality of how complicated their situation is sinks in, he makes the hardest decision he ever had to make in his life thus far — to give up on Ha Na. This is the moment I have dreaded for since Episode 5! Poor Ha Na! Imagine her shock upon hearing the words!

They go into a nearby café and Ha Na pleads for the reason why they have to part when they have barely just started. Joon avoids her gaze as he knew he couldn’t stand seeing her that way or he may never be able to do what he had to. When he finally does look at her, he tells her to wait for Sun Ho, and then gets up to leave. She reaches out and holds on to his arm, once again asking him to make her understand. Tears well up in Joon’s eyes and ignoring the lump in his throat, shrugs her hands off and leaves. Then in solitude, he stops under a street light, leans on its post as if for support, and finally allows the tears to come… the lamp post an inanimate witness to his agony, and somehow a symbolism of an “end” to something so real and so beautiful in his life. (A few minutes into the episode and my heart was completely torn to pieces!) Later, Ha Na walks with Sun Ho in the same direction Joon did. She stops right before she reaches the same lamp post that bore witness to Joon’s pain and turns back, unwilling to accept that this is, indeed, the end of it all. 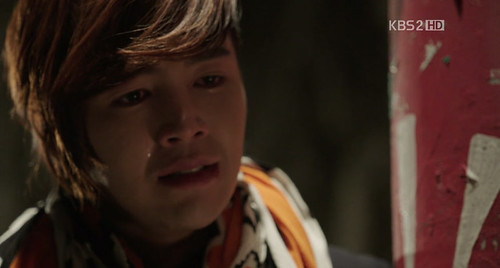 Wallowing in his misery and the realization that their love just may never be, for his father is certainly not going to give up Yoon Hee this time around, Joon is confronted by Sun Ho. Joon tells him that it’s the only logical thing he could think of to protect Ha Na from getting hurt when she finds out (He really loves her that much!) , and that he was just playing with her anyway so it’s no big deal. He removes the ring Ha Na gave him, a symbol of their love for each other, throws it on the table but it ends up on the floor. 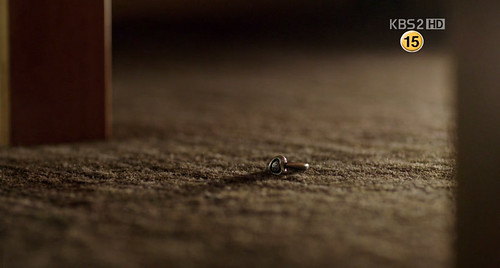 I feel deeply for Joon ‘cause when he has finally found the one meant for him, his first love at that, circumstances play tricks on him… on them. I can see the turmoil and frustration inside him, the pain of having to let go of someone so precious. For the first time in his life, he is (was) actually happy. Why? Why does it have to be this way? Why them? This is driving me crazy! PD Yoon and the scriptwriter sure know how to toy with emotions.

To cope, Joon pretends to go back to his old self to mask his feelings hoping that it would give Ha Na reason to hate him. Yet this is a futile attempt for surely, he has become a different person, albeit, a better person, because of Ha Na and his love for her. He tries to avoid her but because they live and work in the same place, not seeing each other is totally impossible. As hard as Joon tries to avoid Ha Na this time around, she on the other hand, goes out of her way to seek him out. Twice she does, and twice she gets rejected and has to face a hostile and indifferent Joon, pretty much how he was before he met Ha Na. (It breaks my heart to see the hurt, the struggle, frustration, misery, and confusion in him each time he rejects her. His eyes always give him away… they just couldn’t hide what he truly feels.) 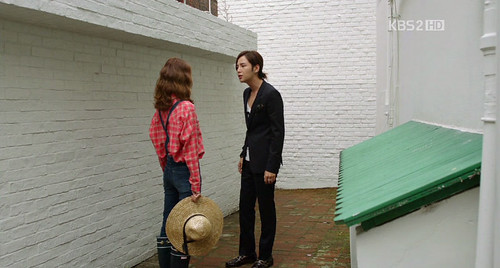 The final straw is when Joon comes home drunk. His heavy footsteps wake Ha Na up and as she opens the door, he stumbles into her. Upon seeing the helpless expression on her face, he could not help himself. Momentarily forgetting everything, he reaches out and hugs her so tightly, allowing himself the pleasure of holding her again, if only for the last time… and then he breaks down. But it would prove to be but for a very brief moment. Reality once again sets in and with the best smile he could muster, he pulls back and tells her he doesn’t feel anything at all. Ha Na, unwilling to give him up just yet, embraces him again, and in disbelief, asks him if he indeed doesn’t have any feelings for her. Caught between what his heart wants to say and what his head tells him to do, he painfully tells her that they should just put an end to whatever it is they started. And with all the strength left in him, he removes her arms from around his neck. (My heart completely sank! I really love the way his face and chin fit perfectly on her shoulders! ) Finally realizing that her attempts for reconciliation are hopeless, Ha Na forces herself to accept it as it is and turns to leave. Joon, whose arm blocks the doorway, stares at her with longing eyes, his heart telling him to hold on but his head tells him otherwise. Hesitantly, he slowly removes his arm to let Ha Na pass. And in deep frustration, he agonizingly stares at her retreating back. (Reality does bite… and hard! Darn!) 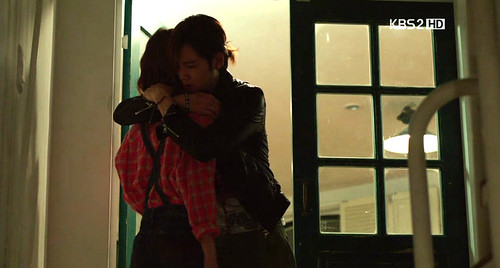 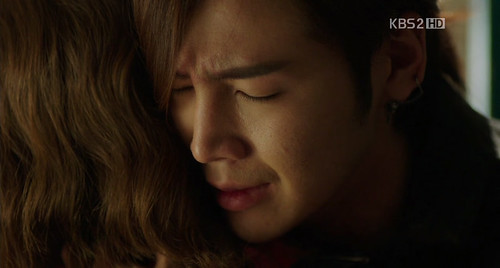 Unaware of their children’s budding romance, In Ha and Yoon Hee begin to see each other again. I cannot blame them and I perfectly understand. I would probably do the same if I were in their shoes. Theirs is a love lost and found, and they have been given a second chance at it. I’m afraid though that it will be at the expense of their children’s happiness. (Seems Love and Fate are playing tricks on these four people. It is so unfair!) 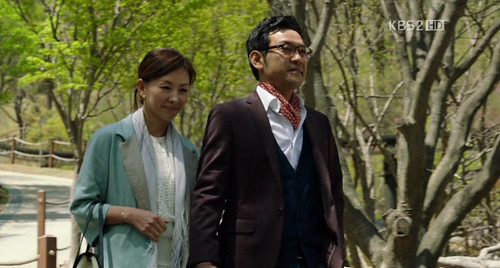 Tae Sung, on the other hand, couldn’t have picked a worse time to be true to himself. Coming to terms with his feelings for Ha Na, he breaks off his engagement and confesses to her. To which Ha Na could not respond to because she was thinking of Joon the whole time. 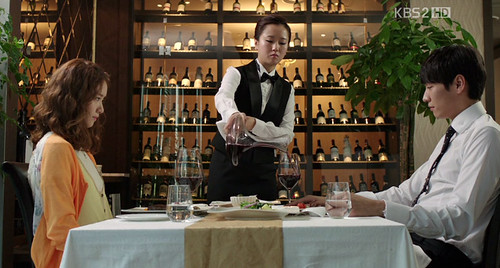 And then Wun Ho, Chang Mo’s nephew, comes into the picture. He takes an interest in Ha Na when he sees her breaking down while he was singing in a street performance. He assumes that she is so much affected by his song that he thinks she is his soulmate. Funny, ain’t it? I think Wun Ho and Chang Mo’s scenes are the only breathers in this tear-jerking episode.

Then Mi Ho (who sort of reminds me of the young Hye Jung), irritated at being left out of what’s happening, lurks around Sun Ho’s clinic. She sees the doctor’s notes on the relationship between In Ha, Joon, Yoon Hee, and Ha Na and finally figures it out.

Meanwhile, Hye Jung and the selfish b**** that she is (sorry, I couldn’t find a better word. And even that, to me, is an understatement in itself!) would stop at nothing to break In Ha and Yoon Hee apart. She finds a way to have Yoon Hee fired from her work at the resort. What more, she personally confronts her about it and tells her (not ask) to give him up again and let them be. She will never allow In Ha and Yoon Hee to be happy, even if it’s the last thing she ever does in this world. If she cannot have him then nobody else will! (Ah, this woman, she is really getting into my nerves! It’s one thing to really love someone more than yourself, it’s another thing to be obsessively and possessively in love when you clearly know that he can never be yours. She is bordering on downright crazy! Oh well, sometimes you got to believe what you got to believe.)

Then Ha Na gets an opportunity to work in a photoshoot with Joon. The jeweler who took an interest in Ha Na wants another series of photos taken and despite Joon’s protests she agrees to be the model. One last time, she wants to see for herself and confirm if indeed what he’s saying is true – that he doesn’t have any feelings for her. The shoot takes place by the beach and as it turns out, it is the same beach that In Ha and Yoon Hee went to during their date in the 70s. I pity Ha Na as Joon gives her the cold shoulder treatment. She gets lashed at, even insulted, a number of times yet she takes it all in stride. At the end of the shoot, she invites Joon to stay overnight with her at the beach but he refuses. However, as his car pulls away and he sees Ha Na’s turned back slowly disappearing from his view; he could not just bear it any longer. He gets off the car and eagerly runs back to her. Meanwhile, a bus pulls over on the opposite side of the road. A man and woman get off it, and as it pulls away, reveal In Ha and Yoon Hee standing on the sidewalk. What a coincidence, what timing! 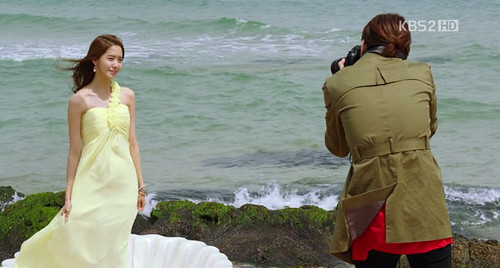 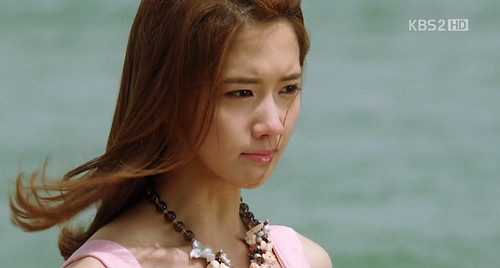 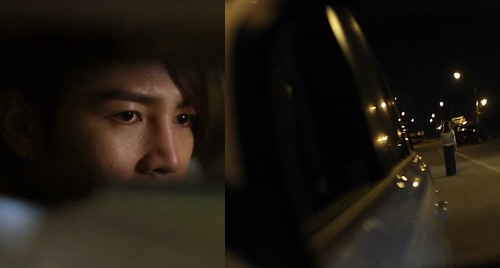 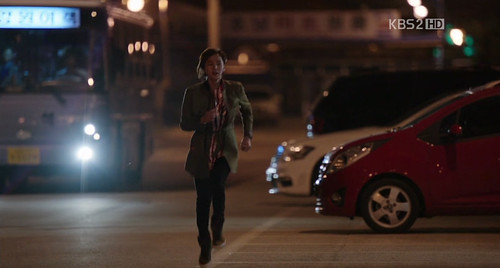 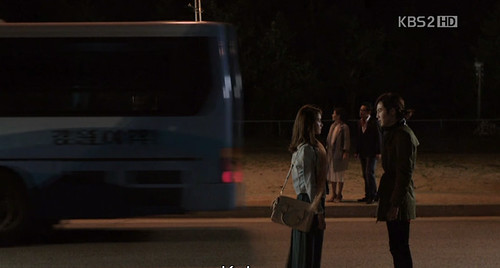 I know Seo Joon and Ha Na’s happiness may only be but for a while because of the unusual circumstances they are in. It is inevitable and yet, for the life of me, I just cannot accept it. I never expected things to take a sudden turn so soon. Not in the 12th episode!!! Seriously, this episode has left my heart torn to pieces. Yes, there were light and happy occasions, but the heart-wrenching moments between Seo Joon and Ha Na were just more than I can take. I am not one to cry over dramas, and this is no exception, but one thing’s for sure… it totally broke my heart!

From the ultimate emotional high of the last episode, it now comes down to this. Nature has taken its course. I have nothing against In Ha and Yoon Hee and I am really happy for them, but I feel so torn and frustrated that Seo Joon and Ha Na’s love may never stand a chance because of them. They may be exact opposites of each other ~ mother-daughter, father-son ~ but the parallelism in their lives is undeniable. I just hope that Joon and Ha Na will never have the same fate as In Ha and Yoon Hee. Well, somebody’s got to give in order for that happen. And I’m really hoping they would.