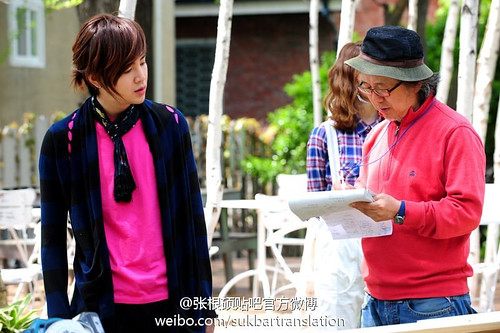 On 27 April at 11 am in Korea, many Japanese tourists gathered in the vicinity of Mapao, Sangsu-dong, Seoul to catch a glimpse of the filming venue of Keun-chan, Jang Keun Suk. They could not move close to him, but were still very happy that they saw him.

On 27th morning at Sangsu-dong, KBS 2TV drama “Love Rain” airing on Monday and Tuesday had a open press conference at their filming venue. The filming cast only had a short sleeping time from when they ended filming at Chuncheon, Kangwon province at 3 am and travelled to Seoul and started their filming in Seoul at 6 am.

At the press conference, JKS mentioned, “Basically, we have started live filming (*broadcast speed caught up with filming speed). Only sleep 2 to 3 hours a day. It feels like a dream when I’m awake.”

At every filming venue, JKS’ Japanese fans can be seen. JKS: “I also don’t know how they know to come here. Many fans are here to tour Korea and coincidentally come across the filming.” 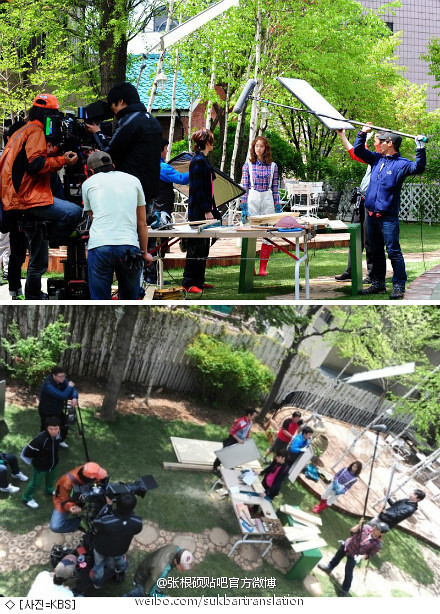 “Regrets low ratings but we are unmoved”

Love Rain started filming in September last year and compared to other mini-dramas, had more time, but because of the background and props change from the 1970s to the modern 2012 period and the need to air sufficient footage weekly, the filming pace is noticeably more tense and stressed. In terms of the quantity of filming, JKS says, “I’m considered number 2. Yoona’s schedule is no joke. To me, it looks like a killing schedule [JKS sticks out tongue].”

The leads Jang Keun Suk and Yoona received favourable reviews for their acting skill, but the viewership ratings are behind MBC’s “Light and Shadow” and SBS’ “Fashion King”. Actors would want to consider viewership. JKS has not spent much thought about this. “During the filming for the 1970s, I’ve gotten closer to Yoona. Everyone is happy on the set, so (we are) resolute in the filming.”

It’s absolutely not easy to express the feelings of the 1970s without having gone through the experience. JKS calls this the “sentimental aesthetics” of the 1970s. In PD Yoon’s words, “throw out the fast-paced and aggressive plot development” – everyone is resolute on this. JKS smiles and says, “(High) ratings involves contradictory twists and turns and exaggerated character, but this time, we want to capture the nature of this drama. Of course there are many regrets, but I am satisfied with the beautiful images.” 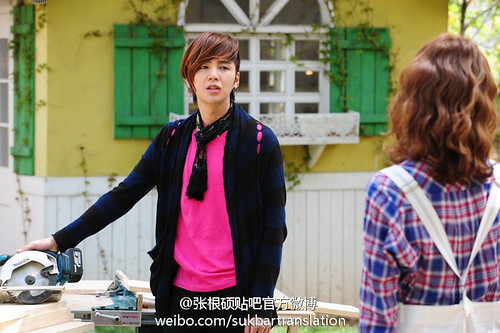 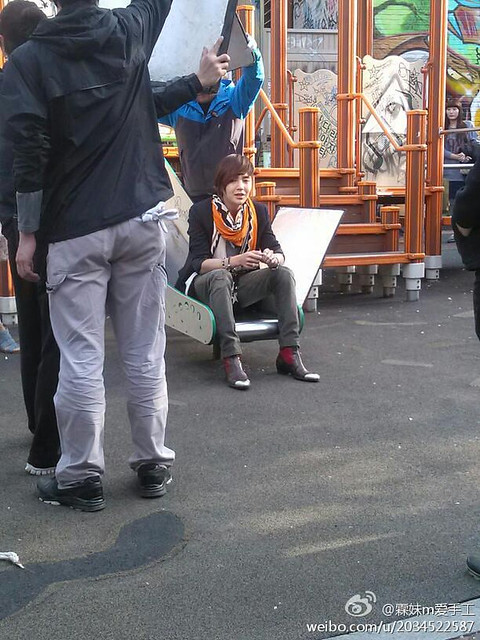 JKS: “Please do not excessively expect success of me”

When we hear the name “Jang Keun Suk”, the first thing that comes to mind is “very grandiose”. JKS himself knows this very well. As the image of the actor “Jang Keun Suk” gives people a very strong feeling of an artiste, sometimes JKS feels lost as to how he should continue his path. JKS says, “Seo Jun in 2012 is typical of Jang Keun Suk. Seo Jun feels a bit domineering, but Seo In Ha in the 1970s was completely an innocent youth. My mum saw my character in the 1970s and also said it will be tough. If I want to choose a safe path, I won’t pause to consider image.”

Previously, the audience liked actors in their mid-20s to 30. However, recently, especially in family dramas, actors around the age of 25 years old are even more popular with the audience. JKS says laughingly, “There’s Park Yuchun, Lee Seung Gi and brother Ryu Ha In. Previously I was lonely and wanted to have some competition with everyone. Now it’s more interesting with more competitors. I want to share ideas and thoughts of responsibility with peer actors.”

“I hope that everyone does not excessively expect success of me. From the results, the low ratings caused continuous talk about the vast difference in my popularity in Korea and Japan, but to me at 26 years old, how can I have everything? Isn’t the 20s an age of continuous experimentation and awakening? Now I have a drama every year; forever I will keep on challenging myself like this.” 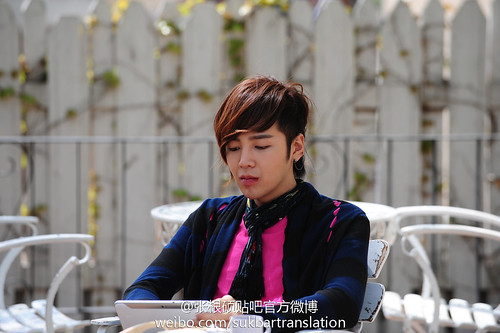 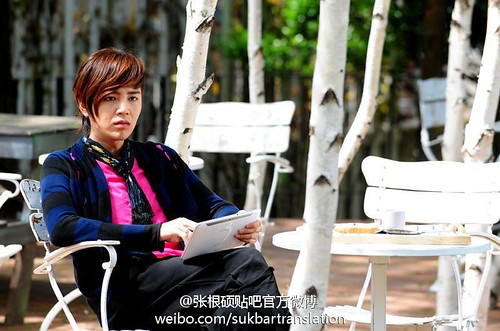 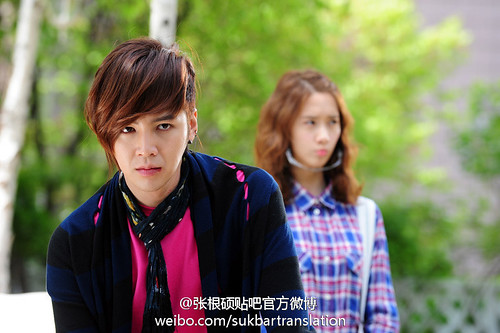 The reason for JKS and Yoona’s passionate kiss at fountain…

JKS answered questions from reporters regarding the kissing scene, and joked that he’s very worried that he will be beaten to death by Sones.

In Love Rain, JKS and Yoona’s kissing scene caused much talk amongst the audience. JKS said, “Seo Jun’s character is that even if he’s sitting quietly, he doesn’t look very cool. The kissing scenes were confirmed before filming, and are passive and lack a sense of reality. It feels too beautified. And Seo Jun’s character is obstinate and direct, hence I adopted an aggressive filming effect.” 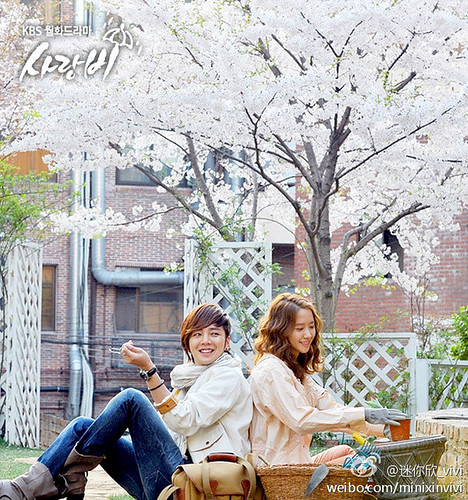 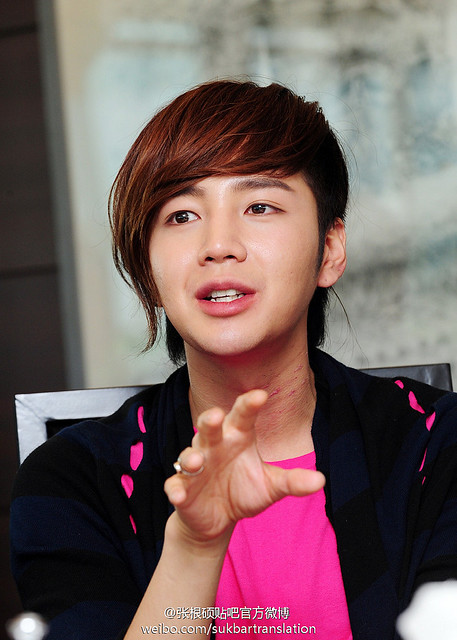 JKS’ kissing scene with Kim Ha-neul in “You’re my Pet” also caused much talk then. This time obviously JKS is more experienced. JKS starts to joke again, “I heard bells ringing in my ears. Recently I’ve been filming many kissing scenes with seniors; this time, I am the leader in filming with a junior.”

PD Yoon adds, “I’m very satisfied with the acting cast. Although Yoona is a singer, her acting skills are not bad. Hope that we can hear more compliments about the acting skills of the actors.”