Wow…. I didn’t know that she attended LIVE IN SEOUL, so I failed to meet her in person then. And I’ve just learned the truth. During the show, he asked the audience where they came from. One of the answers he got and repeated was Swiss. That’s why media reported eels from all over the world such as Swiss attended his show, but it was not correct. She, Beste answered him “Turkey” shyly. Suk just misunderstood her answer! Suk, you must know where she is from! She’s from Turkey and also a Hanyang university student ^^

All that we see or seem. Is but a dream within a dream 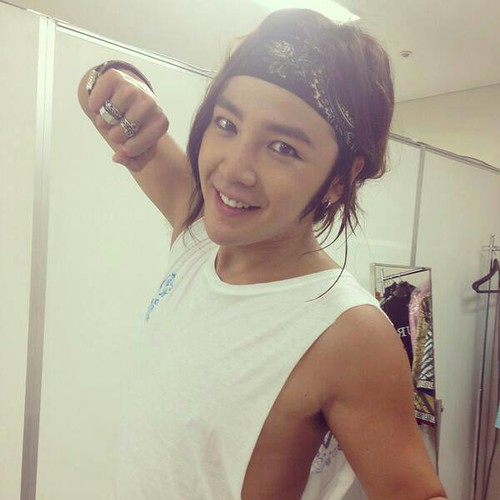 9/5/2015 This is the day that will always be marked in my memory, wrapped into the warmest smile of the one I have always wondered when he would lay his eyes on me. Not “if he ever would” but “when”.. because ever since I first noticed him about five years ago, and watched his footsteps from other continents I have always known by heart that I would get to know him.. and I still believe this, now stronger than ever.. thanks to his smile..

It all started with a dream I had, not the dramas he was in, a dream I had one night which surrounded me with the happiness that was spreading from him. I could even feel the happy feeling his presence caused.. even in a simple dream.. So it led me to search for him..

The first time I saw him, in a fan meeting, I wasn’t able to understand a word he said. But I could have never been so fulfilled, I felt like magic had been casted on my life, by simply being there, because he was in front of my eyes. Before seeing him I had heard his voice from behind the stage. It is hard to describe the feeling I had at that moment.. In one second my five years passed in front of my eyes, like a videotape and something told me: “you are here! you made it”. His deep and charming voice was the proof. At that time there was a few meters between us but even then I was having difficulty looking into his eyes, I was afraid he would see me. I don’t know why I was so afraid, maybe because my heart was beating too fast.. As if I had seen the guy i like on the school corridor and having to pass by quickly without an eye contact. The same feeling.

The fun thing is.. it is actually possible for me to see him in school corridor as we attend the same school. Even though I have some friends who have got to know him in school I have not had that opportunity because our majors are different but knowing that he is around me, somewhere has made me feel happy always.. Of course there are times I get jealous and depressed. A few days ago a Chinese friend of mine asked me: “Jang Keun Suk was at school, did you hear?” later I saw the pictures that Chinese students took with him, I tried not to feel bad that I was not at the right place at right time.. but convinced myself that “it is not the right time”..

Indeed, the right time was two days after that..

I had a dream before the last Seoul concert.. that I was watching his show from the first row which was actually called ”the green zone”. Keun Suk was leaning towards me, stretching his hand. I woke up before I could hold his hand.

It didn’t cross my mind that it was actually a sign for two days later. The day of the concert. On that day the dress I decided to wear was of green color. And my seat was right in front of him, so I could see even his smallest details that I had not noticed before, his eyes that had a light brownish spark which surprised me, the small scars on his face that made him unique, and his unequal eyelids. I was asking myself what good deeds I had done in my life to be that lucky. Didn’t know I was luckier than that.

I thought I would not be brave enough to raise my hand when he asked the audience about the countries who came from far away.. But to my surprise, my hands moved by themselves and suddenly I was waving at him.. His glances found my hands much more easily than I could ever imagine. He looked at me and asked where I was from and the rest of our conversation still feels so dreamy, he couldn’t understand my answer “Turkey” so asked me other countries’ names like, Swiss? I barely remember that he took off his earphone and people began shouting “Turkey” for him to hear. Then he looked at me with a cool attitude and said “Thank you, I love you”. I don’t even know how I sat back on my seat without even a smile. How rude.. I was turned into an ice cube. As if he knew exactly how i felt, all my feelings for him, my heart that had been broken many times because I had always been so close to meet him, he tried to melt me with his smile. He did that while he was singing the two lines from “turn off” by looking into my eyes, smiling and pointing at me. The cheering of the crowd followed. When I looked into his eyes I felt like he read my story through my eyes in a few seconds. I will never forget that moment because I had never seen eyes which are capable of speaking so loud. Right into your soul. Maybe it was his unique way of saying “I know you now, your journey has finally reached its destination”.