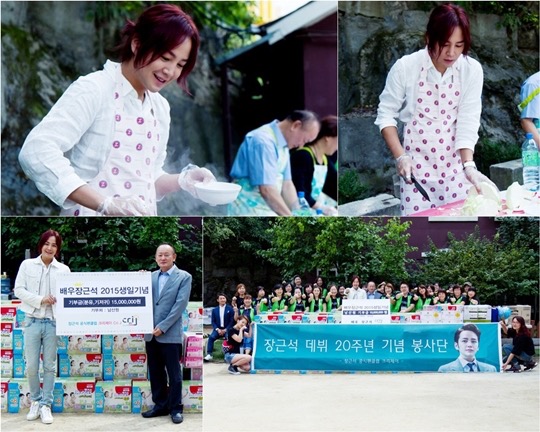 Jang Keun Suk and his official fan club members have participated in a great number of different volunteer activities during last many years, and ‘Namsan Orphanage’ is an orphanage that Jang Keun Suk showed particular love and supports for since 2012.

Jang Keun Suk wore an apron directly after arriving at the orphanage, and went around every child at the orphanage to say hello. Afterwards, he started cooking lunch for the children.

Jang Keun Suk, who enjoys cooking often, made Korean fried rice cake (Tteokbokki), and Korean sushi (Kimbap) for the children. He showed great care for the children even while cooking, letting them to taste bit by bit, and it is said that many officials were deeply impressed by Jang Keun Suk’s warm personality.

Jang Keun Suk said, “Letters that the children at Namsan Orphanage wrote to me were on display at the photo exhibition that my fan club members held recently, and I thought that it would be very meaningful to visit this orphanage with my fan club members. It was a great experience for me, and I hope to continue this beautiful relationship with them.”