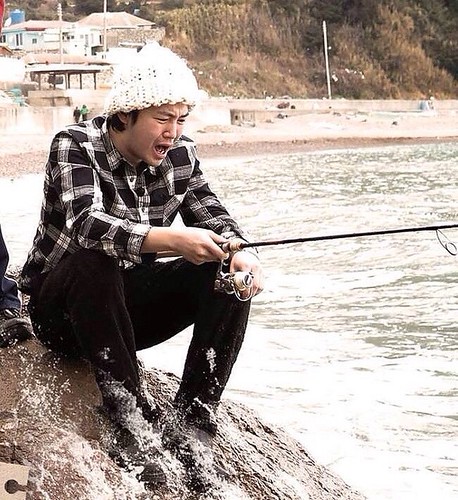 Director Na Young Suk had different reasons for casting the actors he chose for his tvN show “Three Meals A Day – Fishing Village.” The show’s concept involves three actors having to prepare three meals a day using the ingredients they find in their natural environment. The original show “Three Meals – In Gangwon Province” starred Lee Seo Jin and 2PM’s Taecyeon. But as this spin-off was set in a fishing village, preparing a meal meant catching fish.

Na asked Cha Seung Won to participate because the actor is very knowledgeable about food.

He decided to cast Yoo Hae Jin, whom he worked with on “1 Night 2 Days.”

“He is someone who adapts very well to the wild environment and enjoys it,” said Na.

But then the director needed someone to do the hard work. So he approached Jang Geun Suk. And maybe he did not quite explain the concept.

“When I met Jang Geun Suk, I persuaded him by saying, ‘I’m planning on starting up a high quality cooking program. Would you like to join?'”

He did not explain he would have to catch his food.

“Cha Seung Won ended up receiving all the attention for the major tasks and Jang Geun Suk did all the tedious chores next to him,” joked Na.

But Jang Geun Suk was up to the challenge.

“Every single day was hard,” he said.

Despite the difficult work, Jang enjoyed filming the show. It would have been hard, he said, if he had gone alone but he enjoyed working with Chae Seung Won and Yoo Hae Jin.

“Because I was with the hyungs, I was able to enjoy it and felt like it was my home.”

The trailer for the reality show features them looking dirty and bedraggled. Since his fans might not expect to see him like that Jang Geun Suk joked that perhaps they should not to watch the show. Jang, who has been called “Prince of Asia” is usually beautifully dressed and carefully groomed for his drama roles.

The show was filmed on Manjaedo Island from Dec. 19 to 23, 2014. Filming not only involved hard and dirty work but the cast and crew were stranded on the island due to bad weather. Director Na Yong Suk and Cha Seung Won wanted to attend the screening of Lee Seung Gi’s film “Today’s Love,” but bad weather cancelled boat service to the mainland. Na worked with Lee Seung Gi on “1 Night 2 Days,” while Cha grew close to the actor after they worked together on the drama “You’re All Surrounded.”

“Three Meals A Day – Fishing Village” will premiere on Jan. 19.