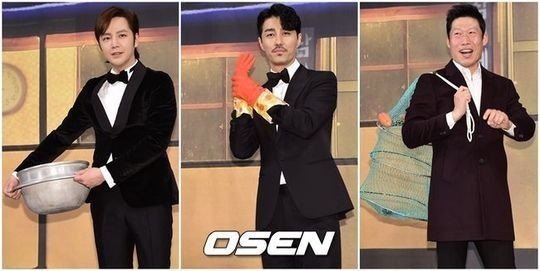 Production press conference of tvN ‘Three Meals a Day – Fishing Village Episode’ was held in Imperial Palace Hotel placed in Gangnam-gu, Seoul on the afternoon of 9th. Actors such like Cha Seung-won, Yoo Hae-jin and Jang Keun Suk and the directors Na Young Suk and Shin Hyo Jeong participated at this event and it was emceed by broadcaster Park Ji Yoon.

Director Na Young Suk deceived these guys ‘again’. They explained about the casting process of that time saying, “We realized that we needed a laborer after we gathered Cha Seung-won and Yoo Hae-jin. Since they would sometimes be tiresome because they are both in 40s, the production crews should do things instead of them if there isn’t a laborer. We’re also tired. At that time, we met Jang Keun Suk. We suggested him to appear in ‘a good high-quality cooking program’ together.”

Jang Keun Suk disclosed that he was sacrificed at the ‘fraud program’ saying, “I decided to go after hearing it was a paradise where food is all over the place. There are good all over the place, but it’s hard to catch them. Elder members went through hardships other than me. When we went to the Ghost Island to catch mussels, I thought ‘I might die like this’. I wished to do things smart like Jamie Oliver after hearing that it was a cooking program, but I only peeled garlic and added red pepper powder.” 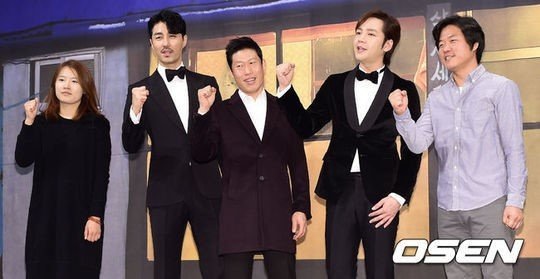 He also prepared milk since he has constitution of swelling face, but director Na Young Suk took it away from him. Finally, ‘Asian Prince’ Jang Keun Suk had to experience being ‘ugly’, putting away his ‘handsomeness’ for a while. Jang Keun Suk opened his heart honestly and aroused laughter saying, “I should tell fans not to watch it. I’m worried since my face looks too ugly in it.”

Cha Seung-won also went through hard times. It was another entertaining program of experiencing extreme situation once again after spending hard times by going inside the coal mind at MBC ‘Infinite Challenge – Extreme Part-time Jobs’. Cha Seung-won conveyed, “Luckily both programs are all extreme. Cooking food was the charm in this program. It would be fun to make meals spending days with two people that I’m acquainted.”

He had plentiful complaints about director Na Young Suk as much as Lee Seo Jin did. Cha Seung-won described, “Director Na Young Suk is provoking at the scene. We have nothing much. There aren’t many items at Manjae supermarket which is a hot place. We have to be self-sufficient since there are only few snacks. There are many variables too. It was hard since I never fished before. Nevertheless, the production crews request things a lot. They say, ‘Do this’ and ‘We hope you do this’. It’s annoying since we don’t have much material. However, I keep on doing those things since I want to overcome that situation. I importune Yoo Hae-jin with that irritation later.”

Director Na Young Suk also acknowledged their difficulty too. Director Na Young Suk calmly described, “There are many people asking about the existence of Minke. We don’t need to find other animals since these three people are working like animals. They are hard cores.”

Although the Sorghum Hell has disappeared, there is the Ghost Island where they went to catch mussels. Although there is Sanche instead of Minke, there are 3 casts that are more like ‘animals’ instead of that. There are director Na Young Suk and production crews of ‘Three Meals a Day’ that torments them ‘provokingly’. It would be great to expect the magic of director Na Young Suk once again after seeing the highlight video of this day, wondering how spinoff program ‘Three Meals a Day – Fishing Village Episode’ that moved its venue from deep mountains to fishing village would arouse laughter from TV audiences and heal them.