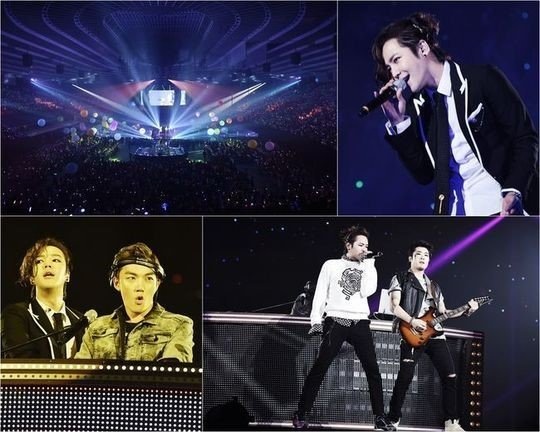 He gathered 72 thousand audiences at 8 stages in 4 cities through ‘2014 TEAM H PARTY-Raining on the dance floor’ which was held in Osaka during two days on 26th and 27th after in Fukuoka and Saitama, starting with the concert in Nagoya, Japan on October 1st.

TEAM H, which is a project group consisted with Jang Keun Suk and his music partner BIG BROTHER, has performed upgraded stage every time they performed in Korea and overseas during the past 5 years. This party tour is assessed that Jang Keun Suk clearly revealed his continuous influence in Japan.

Jang Keun Suk planned on this party concept himself. He showed off delicacy by meticulously checking the special effects, stage management, and totally exposing the arena stage. The concert hall could be recreated into a party hall that reminded of a massive club which could arouse harmony with fans to its maximum.

After the party was over, Jang Keun Suk showed his inexhaustible passion by saying, “I believe that I should first enjoy 200% at the stage in order to naturally commune with fans. I feel really great that those time that I spent planning on making the stage that could harmonize and commune with fans rather than just being watched was worth. However, there are many goals that I wish to achieve yet. I want to present better performance as an artist that can improve with developed image always”.

Additionally, officials that watched this tour concert in the situation of rising worries about Korean Wave in Japan conveyed, “Jang Keun Suk is always arousing much expectation since he is continuing his steps as the only exclusive Korean Wave star as ever. Many people are giving applauses to his effort and passion”.

TEAM H has released 3 albums during the past 5 years and making new concert trend with various planned concerts along with DJing shows.