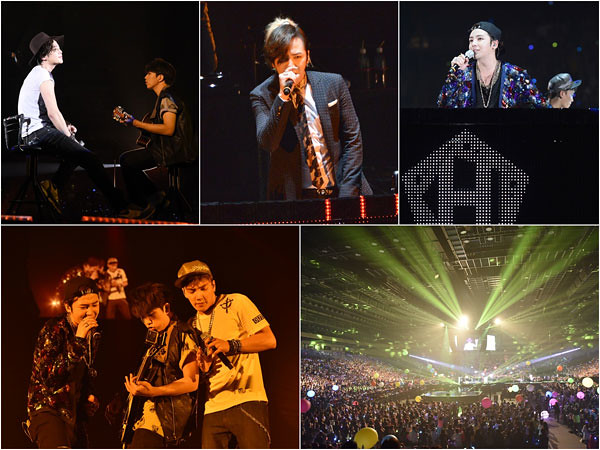 The record selling whole seats by gathering 24 thousand audiences at 2 concerts, with 12 thousand audiences at each concert of ‘Team H’s party tour, ‘Raining on the dance floor’ which was held at Saitama Super Arena, Tokyo for two days on 1st and 2nd made Saitama go up and down with differentiated concert as if it transfigured a massive concert hall into a massive club.

‘Team H’, which was organized with the plan of playing excitingly with audiences through concert by starting with DJing show in 2010, has released 3 albums in 5 years and communicating with fans through hot stages by making various contents with various planning concert that can be competed with no one.

This concert is also making audiences electrified more by raising the concert’s quality with party tour form and with playing-altogether concept through nonstop concert. It is displaying extreme addiction which unifies everyone to dance until the end once they stand up from their seats when the concert starts although there are seats.

Especially, the feature of ‘2014 TEAM H PARTY-Raining on the dance floor’ which differs from other concerts is that it is presented without stopping for 2 hours. It is said that it is a difficult concert if one does not have good strength since the images of changing outfits in the outfit change time until coming upon stage again are vividly shown to audiences.

Also, it uses all the 4 sides of the stage since it is held as a party form. He communes with fans closely and it is meaningful since it is made like a Jang Keun Suk’s show with making it colorfully by not only mixing flashy DJ music, but also his sensibilities such as special effect, laser show, water show, various game events, and guitar live performance.

Additionally, it is said that Jang Keun Suk, who was coloring the concert hall with ‘Team H’s own colors by singing 24 songs, led passionate performance to such an extent as to making all the people concerned surprised by greeting and posing along to the song and fans when singing the acoustic guitar version of ‘Driving to the highway’.

More expectation is aroused toward his further moves since Jang Keun Suk is acknowledged as a unique talented person who is making various concert contents by planning himself such as The Cri Show, Arena Tour, ZIKZIN Festival, and ZIKZIN Zepp Tour apart from ‘Team H’s concert starting with the fan meeting tour as the first.

Jang Keun Suk conveyed right after the concert, “We’re keep trying new things and I feel great since we’re getting harmonized more day by day. Also, our goal is to promote our contents more and being recognized. Thank you fans for always supporting us, and we want to become a team which greatly DJs even we become 40 or 50”.

Big Brother added, “I feel that we become mature more as a team bit by bit while holding concerts every time together. I think we show firm teamwork by making synergy since we well know each taken role”.

A spokesperson of Jang Keun Suk’s agency, Tree J Company conveyed sorry minds to fans, “We are considering about encore concert since there are so many fans that couldn’t come to see the concert since we made the screen with 4 sides due to the party concept of the concert”.

Meanwhile, party tour of ‘Team H’ that magnificently finished concert in Fukuoka and Saitama starting with Nagoya on October 1st, has Osaka concert left which will decorate the anticipated finale on the coming 26th and 27th.