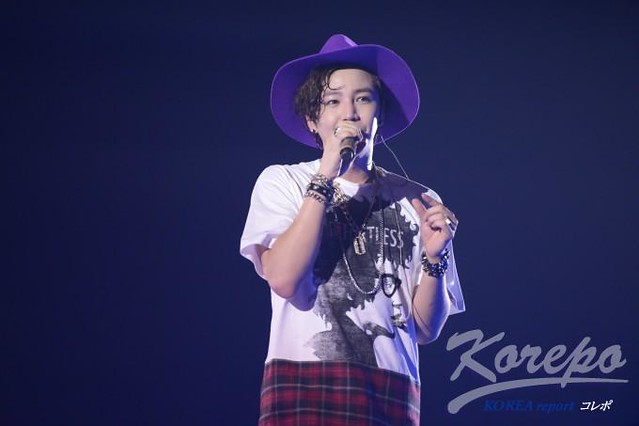 TEAM H, a music unit formed by Jang Keun Suk and his friend music producer BigBrother, has started their nationwide arena tour ‘TEAM H PARTY ~Raining on the dance floor~’ at Nippon Gaishi Hall in Nagoya (Oct 1st and 2nd). TEAM H has 8 stages in 4 cities across the country. 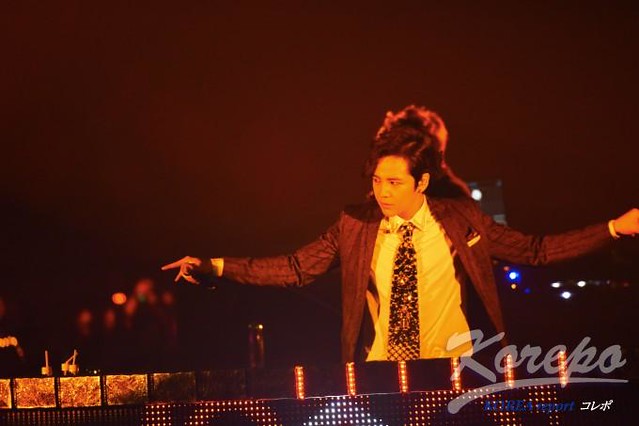 This is their long-awaited nationwide tour with their 3rd album ‘Driving to the highway’ that was released in July after 1 year and 4 months of their previous one. The main stage was set in the center of the venue, with runways in four directions. That helped them to feel close to all the audience. Numerous lights and lasers illuminated the stage and the audience from various angles. Creating such a beautiful atmosphere, BigBrother started DJing. As soon as BB’s DJing started, everyone started jumping all together. The concert venue transformed into a dance floor in a moment. 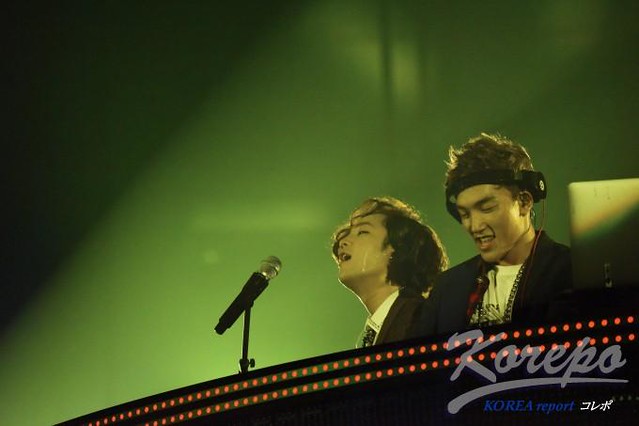 As the opening tunes, they performed nonstop ‘OPEN THE DOOR’ and ‘Do it on the speaker’ from their new album ‘Driving to the highway’. In the middle of 2nd song (‘Do it on the speaker’), when JKS appeared in the fog on the stage, that reached climax of the audience. To respond JKS’ call “Nagoya, are you ready~!?”, the audience who had been looking forward to seeing him in Nagoya shouted back for him. Then, TEAM H performed their popular songs such as ‘I just wanna have fun’ and ‘What is your name?’ from their previous album nonstop . 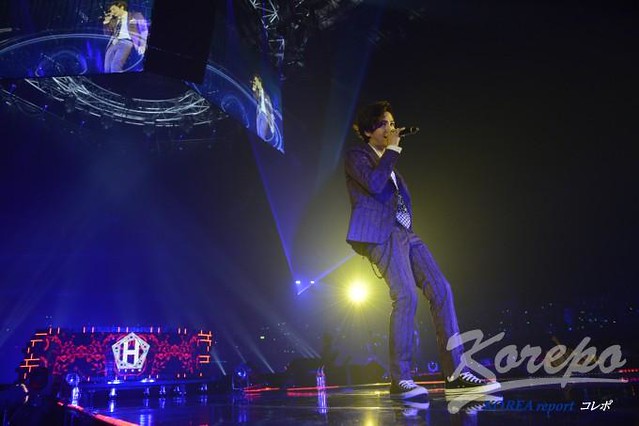 In the middle of their show, a camera followed Jang Keun Suk to the back stage. He went there for a costume change. That was shown on big screens in the venue. Then, a talk session started in his back stage room. He introduced a game called ‘fool game’ that he’s been into recently and played the game with his staff. The lost staff was forced to drink a whole glass of champagne without interruption. That funny event made the audience laugh a lot. After that, he picked up some fans from the audience and brought them on the stage to perform with TEAM H. 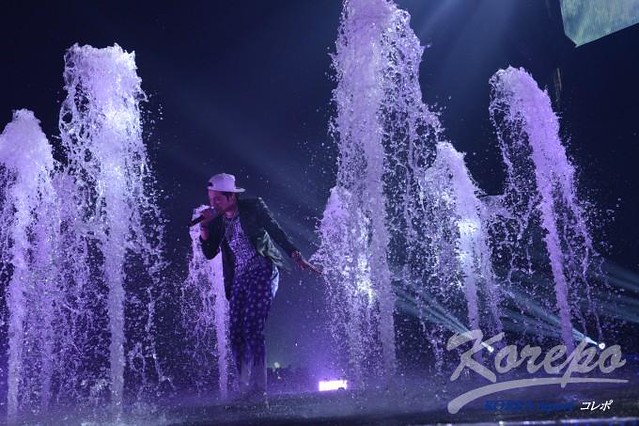 Throughout their performance, JKS ran on the stage freely. He used a water gun to get close to the audience. There were some impressive stage settings such as a rotating and upward stage to entertain the audience. But, I can say the best part of their stage was when they performed ‘Raining on the dance floor’. Surrounded by fountains, Jang Keun Suk got soaked and danced like crazy. It was perfect like the powerful music video on stage. Everyone took in the beautiful and fantastic scene. 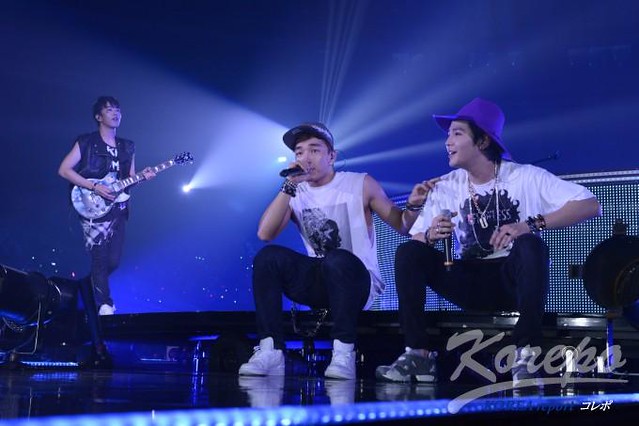 Showing such a gorgeous stage, on the other hand, TEAM H sang ‘Driving to the highway’ with a smoochy acoustic guitar. At the same time, they choreographed how to pose the hook and everyone did it all together. That brought a sense of unity to the venue. As the concert reached a final phase, their performance gained the strength. Keun Suk spoke to the audience, “I could die happy right now! Don’t you agree with that?” 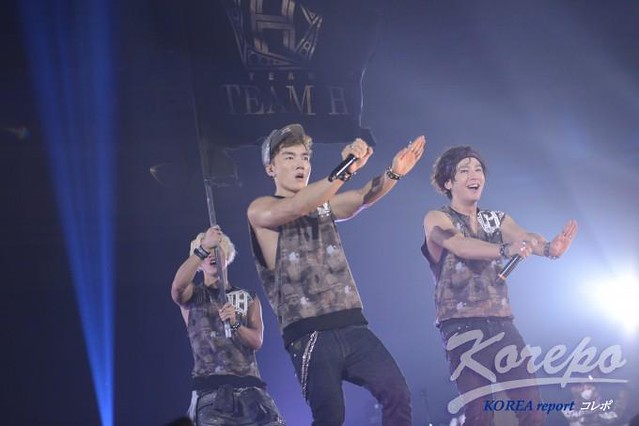 JKS said that he would like to show his real self as much as possible in his solo concert last year. This TEAM H stage showed how much he himself enjoyed performing on the stage. Through the concert, they performed 24 songs. Their powerful stage was full of enthusiasm to the end.

TEAM H PARTY singing and dancing with fans has just begun. This month they have another stage in Fukuoka (Oct 11th and 12th), and in November they have in Saitama and Osaka. 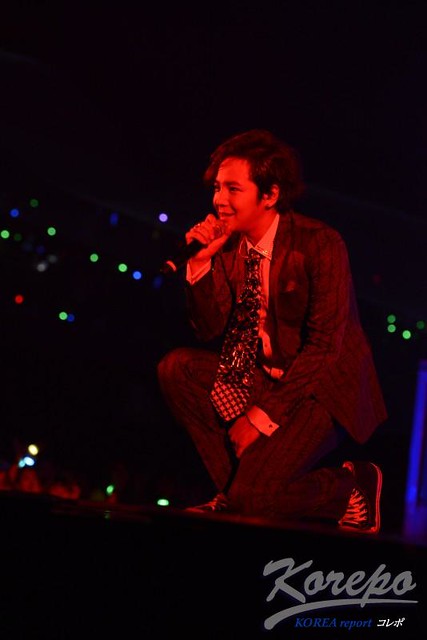 tenshi_akuma’s note: The game called ‘바보(Pabo; fool in Korean) game’ that Suk has been into recently ‘fool is not so easy to play while drinking. He told that he did the game in China with staff for 6 hours nonstop. It’s a quite confusing game when I heard his explanation. Especially when we play the game while drinking, it must be much harder! If you’re interested, please try!

[Reference video]
*The players are not good at playing this though. http://youtu.be/BQFDbgj-yfc

—
Open the door
Do it on the speaker
I just wanna have fun
What is your name?
Can’t stop
Listen to me mother
NO HUMAN SMELL
Sunshine
Still working
Gold digger
I’m so ghetto
Liquor shot
Getting over
SHAKE IT
Rock and roll tonight
Welcome to my world
Raining on the dance floor
As time goes by
Beautiful change
Driving to the highway
Take me
~encore~
Party tonight
Feel the beat