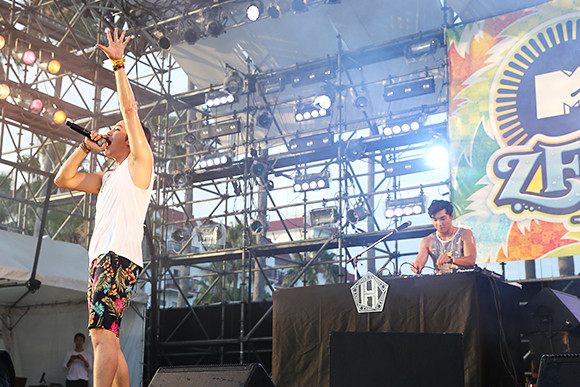 TEAM H had the honor of closing the first day of ZUSHI FES 14! At first, BIG BROTHER appeared on the stage and warmed up the audience with DJ performance. Then, Jang Keun Suk appeared. As soon as the audience saw JKS, A tremendously huge cheer arose from Palm Tree Stage. When they performed ‘Open the Door’, they Stirred the audience, saying “Clap your hands!” “Raise your voice!” That made their voltage reach a climax. JKS and BB looked happy to see their excitement, and they also jumped and performed fully. Palm Tree Stage became filled with excitement and a sense of unity that was suitable for the final stage. When they performed ‘Can’t Stop’, JKS danced sexily, which captured the hearts of the audience.

Shortly before sunset, TEAM H dance party became heating up. When they performed ‘Liquor shot’, a huge clapping arouse. When they perfomed ‘Rock and roll tonight’, JKS and BIG BROTHER showed an impressive ‘chase’ performance. JKS spoke to the audience, “Hello. We’re pushing 30, TEAM H” “Until when will you continue this party tonight?” And the audience replied loud. Their sexy and powerful performance suited a sunset stage.

The last song was ‘Take me’ released as a single in June. The two sang it, sitting in the center of the stage. At the end, JKS even laid down and sang it. After the performance, they left the stage, saying “Let’s have a drink” “Give me a beer”. Their stage was perfect for the finale of Palm Tree Stage.

—
Set list: (shared on twitter)
Open the door
Raining on the dance floor
Can’t Stop
What is your name？
Liquor shot
Do it on the speaker
Rock and roll tonight
As time goes by
Driving to the highway
Take me