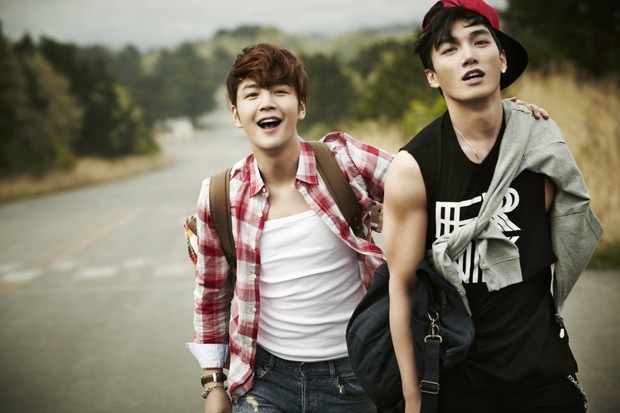 Totally different from their past numbers that were full of clubbing music, their latest song is full of warmth such as nature and humaneness. And it is released as their first single album. The MV in which their soft looks fascinate you is also a must-see!


No. We were just acting. In reality, we are not so close. Lol.

── ‘Take me’ released on June 25 is your first single, right?

JKS: Yes. We’ve released only albums so far. Ahead of our 3rd album ‘Driving to the highway’, we decided to release this song as a single.

── The cover photo surprised me. Because it’s totally different from your image in past.

BB: Oh, yes. It was taken outside in nature, not at photo studio.

── Both of the first limited production and the regular one show your natural innocent looks. Besides, you two smiled.

JKS: Judging from these cover photos, I think we looked very close friends.

JKS: No. We were just acting. We are not so close in reality. Lol.
BB: Right. Lol.

Warmth such as humaneness and comforts that make us think of nature has come to the front.

── Such a funny exchange shows how close you are. Lol. Same as the image of the cover photo, this song ‘Take me’ gives us a kind of natural impression.

JKS: Well, I think ‘Take me’ is a bit different from our previous works. For example, humaneness or comforts that make us think of nature. I think such warmth has come to the front.

── Your previous numbers are like something for a party held in a closed dark room.

JKS: Right. But, this ‘Take me’ is like something for an open-air festival. Compared using colors, I think our previous works have an image of black. On the other hand, this one is like white or green.

── We can say it’s so-called ‘a melodious song focused on the lyrics’. In such a sense, I think ‘Beautiful change’ contained in your 2nd album ‘I JUST WANNA HAVE FUN’ has a similar sound.

BB: It was exactly ‘Beautiful change’ that came to my mind when I started to make ‘Take me’.

BB: Because ‘Beautiful change’ is quite cathartic for me even listening as well as singing it. I wanted to put the same feeling into the next album, so I made this ‘Take me’ first. And then, I made other numbers at the core of it.

── I feel a change of the lyrics, too. For example, I have an impression that your previous works lead people aggressively. On the other hand, this song is something like to walk along hand-in-hand.

JKS: Right. It’s not like a song ‘We force you to dance with this song’. This is nothing like that. It’s like something gentle. The song itself is like the lyrics ‘Take me to the wonderland’ show.

I want to get away from reality. I want to go to the wonderland.

── Please let us know about the music video. It’s full of an air of openness.

BB: We made this based on JKS’ image. Surprisingly that was perfectly the same as what I visualized when I was making the song.

── What kind of the image is it?

BB: It’s like ‘I want to get away from reality. I want to go to the wonderland. Having such feelings, I’m heading for somewhere…’

── I see. That’s why there are lot of scenes you’re moving.

JKS: We filmed this in Jeju Island in Korea. Because I wanted to make the MV that we are running around in nature. That’s why we decided there as the shooting site. There are a lot of highlights such as forests, rivers, horses, and scenes shot from the sky with a helicopter-camera.

── I think your soft looks are also one of the highlights. It’s my first time to see such BB with a gentle look on his face.

JKS: Actually BB had difficulty with that. BB, you’re not good at acting naturally, are you? Lol.
BB: Yeah. It was tough for me. Lol.

── Lastly, can you give a message for your fans?

JKS: OK, then BIG BROTHER will wrap up the interview snappily.
BB: Well… Alright. If you have a feeling to get out of usual life, please try listening to ‘Take me’!
JKS: It’s not a bit snappy. Lol.
BB: Really? Then, you should wrap up. Lol.
JKS: See… Let’s say like this… “Take me to the wonderland!”
BB: Aha ha ha ha! Lol.
JKS: Don’t laugh. Lol.