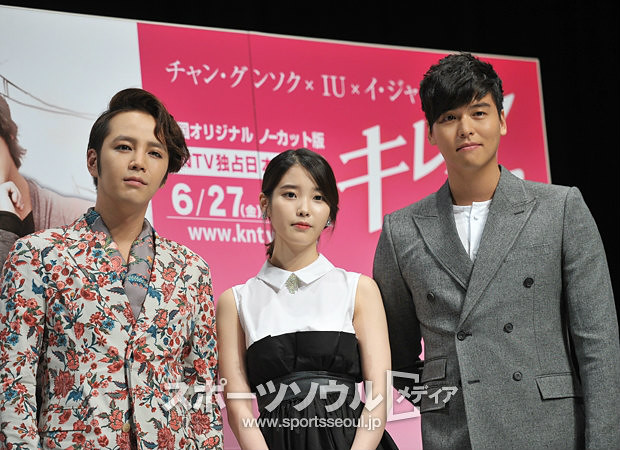 ◆ How do you feel now that you had a reunion about half a year after finishing BM?
Lee Jang Woo: This is our first meeting after the drama. When we meet again here, I feel as if I met a Korean in a foreign country. After seeing familiar faces, I feel my expectation is growing. I am very glad to be able to see them after a while.
IU: I am also happy to see them after the time being. Everyone’s hairstyle has changed nicely, and we’ve lost weight. Meeting again with a cool look, I am very happy.
JKS: I’d like to go to a Korean restaurant together soon. (lol)

◆ How have you spent your time after the shooting?
JKS: I was taking some time off. It was my resting time. Meanwhile, I spent lots of time recording album as Team H will release its first single CD at the end of this month. Also, there are many upcoming events in Japan this summer. Not only fan meetings for this drama but ‘Beautiful Man’ Summer Festival in July, and my solo concerts are scheduled, too. Therefore, I will have opportunities to see you in Japan later till the end of the year.
IU: I released a cover album in Korea and just finished concerts in a small theater the other day. Though I was very busy during the shooting of ‘Beautiful Man’, I am more relaxed than that time as I had relax schedules now.
Lee: I have not done anything.(lol) I was enjoying a charging time. I have watched the two being active, and I was trying to forget the drama ‘Beautiful Man’.(lol) In fact, I have not had time to rest before, so I was using this opportunity for that. But I think a man has to work. Now I come to work after a break.

tenshi_akuma’s note: For actors, forgetting what they played for a long time is a kind of hard. Especially while shooting, they’re living as the character intensively. So Lee Jang Woo’s answer is really understandable. 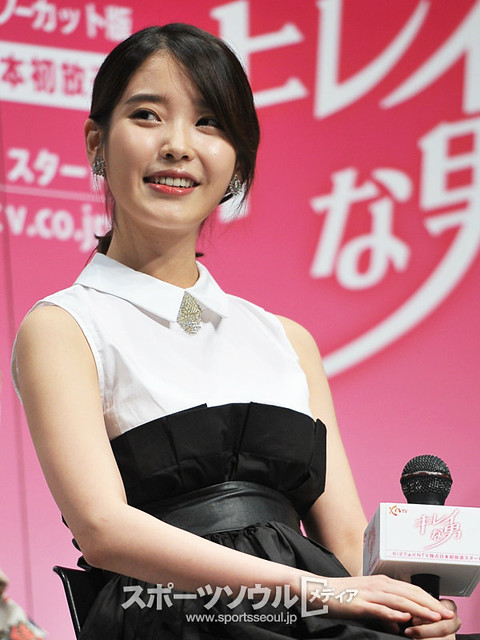 ◆ Would you tell your feelings when you hear the Beautiful Man’s FM will be held?
IU: When I heard the plan of Fan Meeting, I wanted to go to Japan as soon as possible, because I was glad to see David and Ma Te after a long absence. In addition, it’s been a long time since I came to Japan last time. So personally I’ve wanted to visit Japan, too. I wanted to have Japanese food, and I wanted to meet Japanese fans. So I am delighted that all my wishes came true at once. For the fan meeting tomorrow, we’ve prepared each stage of us. Personally I am looking forward to the fan meeting, since many interesting interacts such as ‘behind the story ‘and ‘talk show’ as each role in the drama are planned.
Lee: It’s my first time to take part in promotion events of a drama. Keun-suk said in the press conference that he would meet fans as Ma Te. That gave me a thought that I need to recall David.
JKS: Generally speaking, actors try hard to leave out of characters they played after finishing dramas. I feel a bit pressured because I have to recall memories from shooting and have to play my role completely again at the drama fan meetings in Japan. However, I think we can make enjoyable stages without stress as I am not alone on the stage but with the other co-stars this time. In my idea, the highlight would be to listen to Mr. Lee Jang Woo’s song. 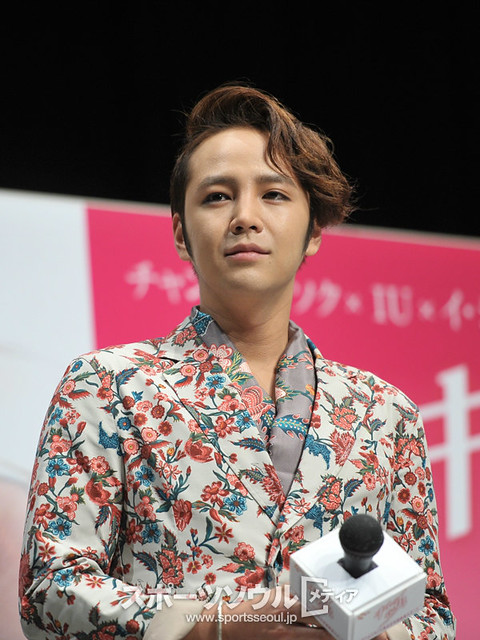 ◆ Could you introduce songs you prepared for the fan meeting?
JKS: I chose a song which I’ve never sung live. It’s ‘Beautiful Day’ included in drama OST CD. I am still not used to singing the song, but I will do my best.
IU: I prepared two songs which are included in my Japanese album. One is ’Rain Drop’ as now is a rainy season, and the other is ‘Boyhood’ that I understand is a nationwide-popular song in Japan.
Lee: I prepared two songs from OST of ‘Beautiful Man’.
IU: I am wondering if there are two songs sung by you?
Lee: No, my own song is only one, and the other one is ‘Fever sickness’ by HWANHEE.
JKS: I’m going to sing my own song, too. It is ‘Nature Boy’ in my own album. 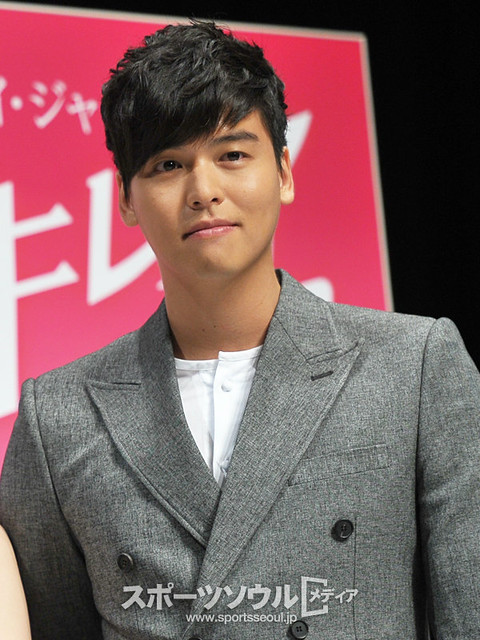 ◆ Please point a person you think fits answers to some questions from now.

Q1: From the first impression who did you find gaps on playing together in the drama?
[All pointed to IU.]
Lee: At first, I was very worried if she would be very unfriendly because she is an idol star. She is younger, so I feared we could not communicate well and be awkward. Because my role David in drama came to one sided love with Bo Tong. I started to film, imagining she may be kind of cold. Indeed, she was.(lol) So, I tried to talk to her approaching. Then, she replied, like “Oh, I see” coldly.
IU: You misunderstood me.(lol)
Lee: Yes, in fact, she has very good personality. I have known Keun-Suk well as we have been close. IU had a different personality than I presumed.
JKS: I was expecting that we would have a lot of fun when I heard the leading actress was IU who is younger than me, before filming. I had thought she would communicate charmingly with us and the shooting site would be warm. However, I was really surprised that she has better acting skills than I expected, and she has a high pride of profession. She seldom chatted, always concentrating on her own scenes. She was very professional in front of camera, then I thought she would be successful in this world. (lol)
IU: You said to me, “Seeing you, I feel as if I look into the mirror.” (lol)
JKS: I said IU is another JKS. (lol)
IU: The two gave me this story at a private session that they confessed that they were surprised at my big gaps at first. I am very shy to mingle with other people, so I had gone home quickly to think that they may want to return home early for preparation for the next shooting after work. But, in fact, I wanted to be close to them. Now we are intimate.
JKS: What I said before is just a joke. I wanted to tell that she has high professionalism. 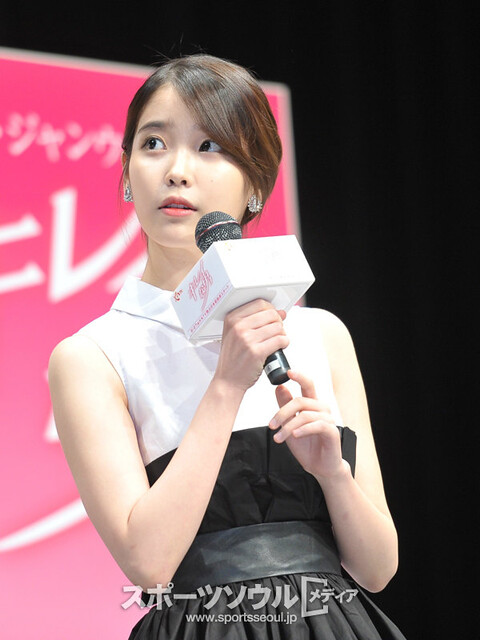 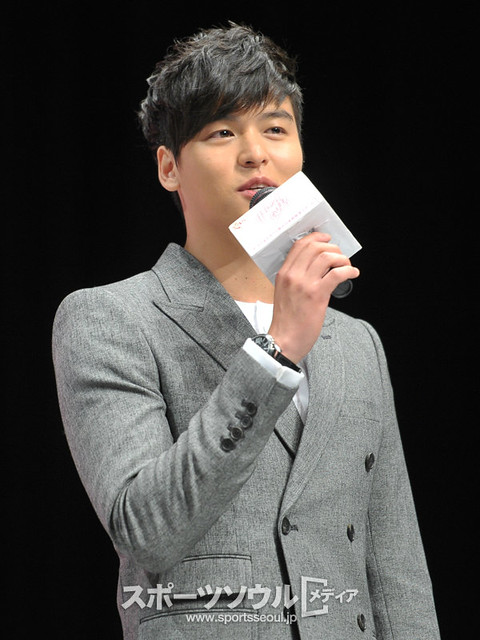 Q2:Who produced NG most?
[IU and JKS pointed JKS and LJW pointed himself.]
IU: JKS had massive lines. For example, there was a scene to express emotion with over one whole page lines of the script. I was thinking why he does not give NG often, then, he produced a NG…(lol)
JKS: I had a lot of actresses who are my partner in the drama. I meet 10 women and various things happen. I remember it was difficult to memorize lines to show various emotions to fit each scene. That’s why whenever I encountered the difficulties, I was stimulated by younger IU to find that ‘she is very professional’and to think that ‘I need to learn from her.’
Lee: Now that I think of it , though I did not remember well, JKS had many lines definitely and IU had many shooting takes. On the other hand, I finished filming earlier than them and I had scheduled to reach shooting place late in the morning. So I did not made mistakes…

◆ Can you reveal some BTS stories back then?
IU: I had many scenes to ride on a car with JKS. It was around shooting the second episode. After filming the scene, we went back to the departure place by his car. JKS is very good at driving and looked a lot of fun, but I was really really afraid of speeding. I was about to tear up though he was enjoying driving.
JKS: I misunderstood her scream like “Kya~! Kya~!” beside me as is “This is fun!” (lol) 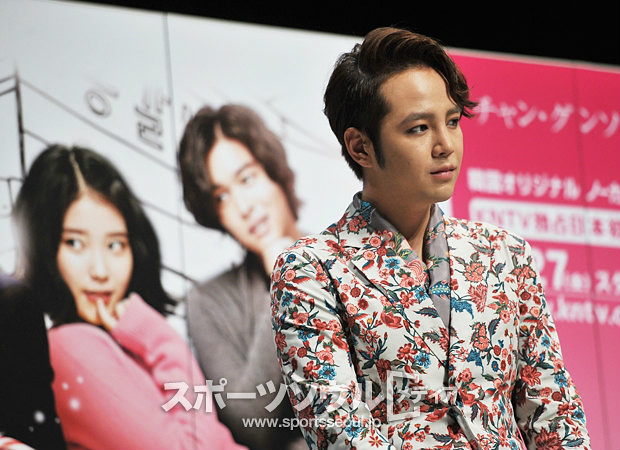 ◆ How about you, JKS? Do you have any BTS stories to share with us?
JKS: I heard the Jang Woo Hyung likes camping when we talked at the shooting spot. I am interested in out-door activities. So we were talking “Let’s go camping somewhere among only men after shooting.” But I am sad that we could not realize it yet. I would like to go together this summer on occasion.
Lee: As I said, I had been at home and resting without doing anything…(lol)
JKS: We should have taken a break together.(lol)

◆ What improvement you think you made as an actor or a human-being through playing in ‘Beautiful Man’?
JKS: I think this drama could express myself in my 20’s the most that JKS is. The most meaningful thing I learned is that I played actually ten characters in the stories of meeting ten women. And I guess it would be my last work in which I could perform cute aspects suitable for a romantic comedy drama. Of course, I would like to act in romantic comedies if I bump into good ones. But this work also made me realize that I should move forward to become a mature actor from now.
IU: I have not appeared on many dramas, but among three works in which I played so far, Bo Tong was the most cheerful role. So my own character became sunnier while shooting the drama. Even now it’s been six months since the shooting ended, the active personality like Bo Tong is still alive with me. And I like it very much. I think it is a gift that Bo Tong gave me. I am not a talkative person originally, but thanks to playing Bo Tong, I came to feel full of energy. That is the best benefit from the drama.
Lee: I learned acting skills from the two. I am confident that I can show more improved performance in my next work. 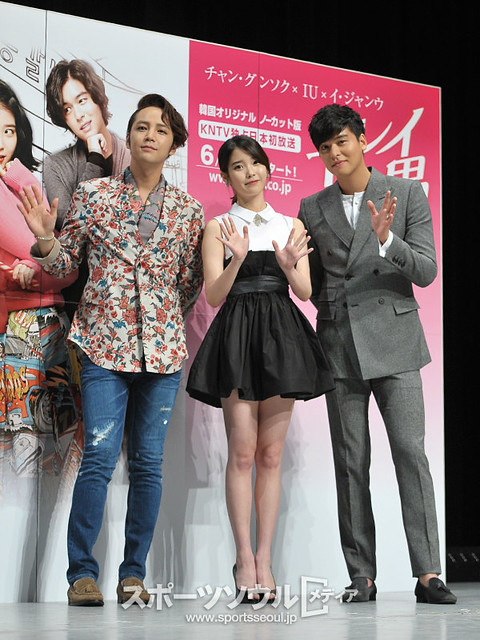