We interviewed with “World Prince” in Seoul! He was relaxed probably because the interview took place in his hometown. During shooting photos, he sang songs for us and unveiled a secret for the first time… We succeeded to catch his real self not shown in Tokyo. 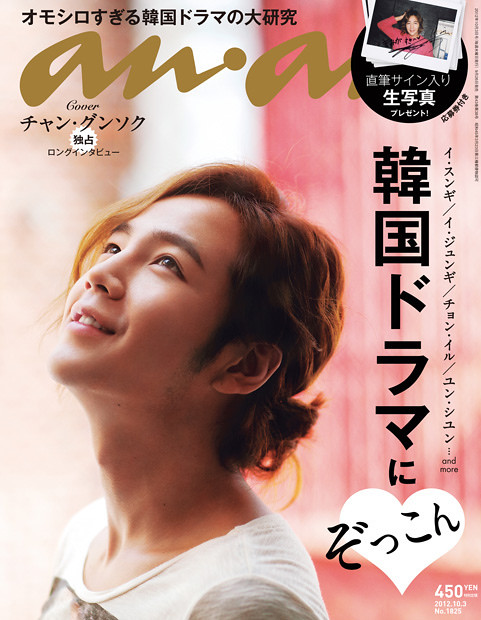 My next goal is to be “World Prince”. Once I have declared , I will make my dream reality.

This shooting was held at a studio in Seoul. Keun Suk who himself drove his car to the shooting location seemed more relaxed than usual. “I feel most comfortable when I’m driving a car alone. Except this, I’m obsessed with work. It might be driving a car is the only time when I feel free without thinking”.

About 2 years has passed since he became super popular after appearing on ‘You Are Beautiful’. Since then, he’s kept running tirelessly. His latest drama is ‘Love Rain’. He played a double role, In Ha, art student in 1970s and Jun, his son, today. “It was quite a fun to play completely different roles in one drama. Since my childhood I’ve been a big fan of Director Yoon Seok-Ho’s drama ‘Color’. So I was happy to work with him”.

As it is a love story, there are a lot of kissing scenes in the drama. “I’ve enjoyed shooting kissing scenes because I haven’t kissed for a while. Lol. Was I nervous? I wasn’t at all. Because I have confidence. Lol. But I’ve always had complains about kissing scenes in dramas. I want to kiss more freely, but I can’t because of the shooting angle. As for kissing scenes, I prefer movies because I can kiss more realistically! Lol”… like this, his mischievous answers haven’t changed a bit. The big thing he’s changed since he first appeared on our cover one and a half years ago is the interview was conducted all in Japanese and perfectly. During shooting, he communicated with the photographer in English. On the other hand. he spoke to us in Japanese. His brightness really amazed us. “I am an actor, but I am a singer, too. I think knowing the meanings of the lyrics is totally different from without that. As long as I sing in Japanese, I must learn hard”.

Keun-suk is active as a singer, too. He is currently in the midst of arena tour. He’s directed the stage since the producution this time. “It’s not in my nature to leave the production to other people. Of course, when acting, it’s necessary to create with other actors and staff. On the other hand, when I’m on stage as a singer, it’s important to bring what I want to convey into shape”.

I became blind to my goal for the first time in 20 years.

This year is Keun-Suk’s 20th anniversary since his debut. How does he feel?
“Until last year I thought something would change when the time came. But in fact, nothing changed. Lol. I’m thinkig what to do in the future while watching my past works”.

His specific plans to the future are as follows. “As an actor, I want to find my representative work. As a singer, I want to challenge various genre of music. Besides, I’m starting a new bussiness this year. I’ll open a shop in Shibuya, Japan, where I’m going to offer original products collaborated with various brand-name manufactures. The first ones are bag collaborated with Korean brand, but eventurally, I want to cooperate with Japanese or foregin brand-names. In this case also I’ve been involved since the planning stage and negotiated them directly. The interior of the shop is in progress, so I hope it will be open within this year”.

Listening to his plans, we’ve become convinced that his leverage and ambition are indeed extraordinary. That’s why he’s reigned as Asian Prince. “I spare no effort to carry out my word. When I released my first CD in Japan last year, I answered that my dream is to be Asian Prince in a lot of interview. LSince then, I’ve found newspapers in different countries describes me as ‘Asian Prince, Jang Keun Suk’. Without knowing, I’ve really become Asian Prince. Lol. A sense of responsibility for my word is probably my motive force”.

However, he’s experienced to give way to despair before. This year he thought he really wanted to quit his job since his debut for the first time. “It was around after Tokyo Dome performance in Japan. Performing at Tokyo Dome was my dream since I was a child. So after realizing the dream, I became blind to my goal for the first time. Every time when I was asked what my next goal is in interviews, I came to think that I want to escape. And, this is my first confess in public, but, in fact, I came to think that I want even to die at that time. Last year I worked literally day and night, so I had no time to relax. I needed some time to consider”. Under such situation, he had a car accident when his manager was driving a car. Fortunately Keun-Suk didn’t get a big damage. “I thought I was about to die. Lol. But when the car narrowly stopped, I thought, ‘Oh, I’m still alive!’ At that moment I found my next goal.. to be World Prince. I felt as if God had asked me ‘What do I live for?’ Of course, as long as I have made a promise, I will make my dream reality. I’m sadistic even toward me, I push myself to do my best”.

At first, I depend on and try to be nicer.

His well-known sadistic characteristics still remain. But we wonder if he might be masochistic when he’s in love…!? “Never! I’m totally sadistic. Of course, at first I depend on her and try to be nicer to her. But it’s just because I try to give her a good expression. Lol. Most of the time, I push her around. But, currently I devote to eels (my fans) only. This is true! When I hold a concert or speak something through camera, I do so thinking I’m in love with my eel. It’s true that I have no time and room to spare, so I don’t need to be in love. But, to be honest, I want to be in love with you, my dearest eel. Lol”. 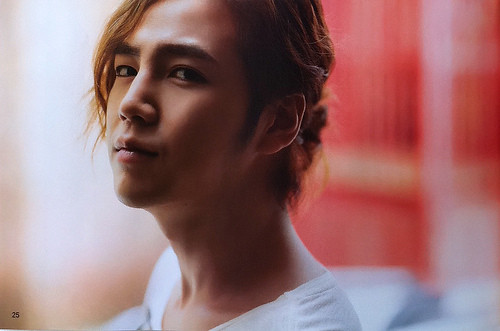