“Hatred is like a long, dark shadow. Not even the person it falls upon knows where it comes from, in most cases. It is like a two-edged sword. When you cut the other person, you cut yourself. The more violently you hack at the other person, the more violently you hack at yourself. It can often be fatal. But it is not easy to dispose of. It is very dangerous. Once it has taken root into your heart…. 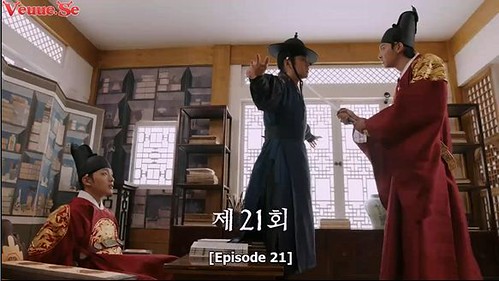 This is an intense episode full of actions that portrays vengeance in most minds fueled with hatred in one’s feelings. The episode starts with His Majesty the King drawing out his sword with intentions of slashing Yeonning, the crown prince, his brother’s throat. Dae Gil stands in front of the king to stop him but the king pushes him aside. Dae gil only manages to stop him by saying that The late Majesty (their fathers) had a dying wish which is to save and protect his brother, Yeonning. With anger in his eyes, the King drops his sword and says that this will be last time he would forgive him but the Noron faction ministers who refused to accept him as a King will not be forgiven. Yeonning asks the King to forgive the ministers but it was not accepted. Dae gil, being a little brother who promised to save and protect Yeonning says that he will find a way to save the ministers. 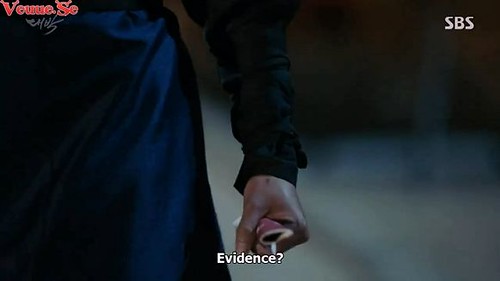 The Soron faction ministers and Yi In Jwa celebrates the King’s decision by having drinks while the Noron ministers are being tortured. Bak Dae Gil approaches the King by presenting him the blood oath between In Jwa and rebel Jeong explaining to him that this was all being planned by Yi In Jwa in the first place. The king who is full of frustrations refuses to accept Dae Gil reasons and decides that whoever rebels will be executed including Yi In Jwa. Prince Yeoning begs the King to forgive the ministers after learning that Dae Gil had failed in persuasions. 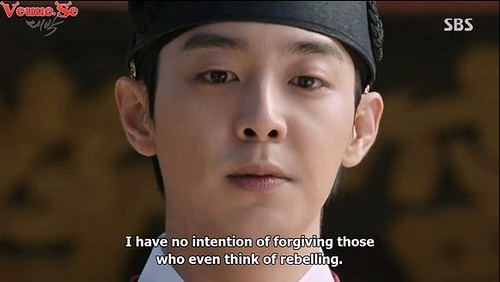 The King had made his decision “I have no intentions in forgiving those who even think of rebelling including …… my brother”. 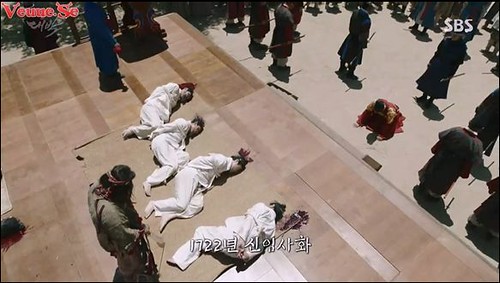 Executions were done to the Noron ministers that even the crown prince, Yeoning could not save their lives. Yeoning cried his eyes out feeling that this was because of him. Their deaths had given him a huge impact that he refuses to see anyone and eats anything. 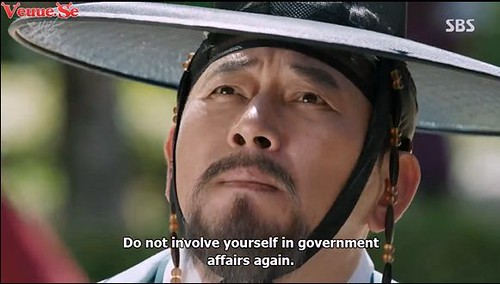 The King confronts Yi In Jwa about the blood oath and In Jwa of course denies all of them. The King spares his life due to his supports all this while but has asked him not to come to the palace again and his privileges will be taken away. Being the usual Yin Jwa who always have Plan A-Z suspected this and had decided to strike his plan out which includes releasing rebel Jeong from the prison by giving him a medicine that will fake his death and contacting his partner, Park Pil Hyun. 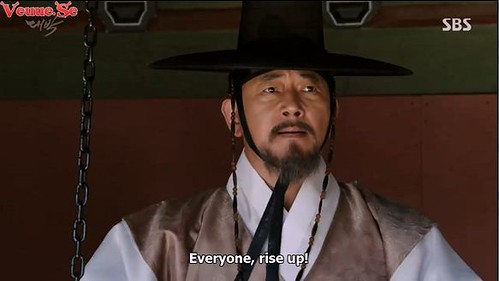 Yi In Jwa enters the palace and with help of one of his people, he rang the bell few times which could be heard from all over the place. He had implanted the rebels/traitors in the place which includes the maids, soldiers, eunuchs and ministers with plans to take away the king’s life. The smart Bak Dae Gil who were sure that In Jwa will make a move realizes about the code sent using the bells which he deciphers as “Mu Sin”. All his accomplices were arrested before succeeding in killing the King. Dae Gil approaches Yi In Jwa tells him about the failure of his plan. Yi in Jwa was surprised that he knew about the plan and drawn the soldier’s sword out to kill Dae Gil. He says that his intentions was to make Dae Gil the King of the nation. He was stopped by the King’s soldiers. The King brought out all his accomplices when he asked for evidence. 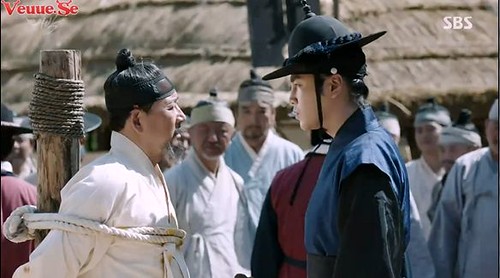 The King is now clear of his treacherous behaviors that he had decided to tie him to a post in public before executing him. This is to acknowledge the public and his followers about the consequences of being a rebel. Park Pil Hyun and Jeong fled before they were arrested. Two of Yi In Jwa’s best men took out all the soldiers and saved him. Baek Dae Gil and Kim Chae Gun realizes this and chases the fugitives to the forest. Kim Chae Gun fights with his former comrade giving slits on Jin Ki’s body. Knowing his defeats, Jin Ki runs towards the cliff and commits suicide. Baek Dae Gil and soldiers chase In Jwa and his man to the river bank. Yi In Jwa escapes by using a boat. 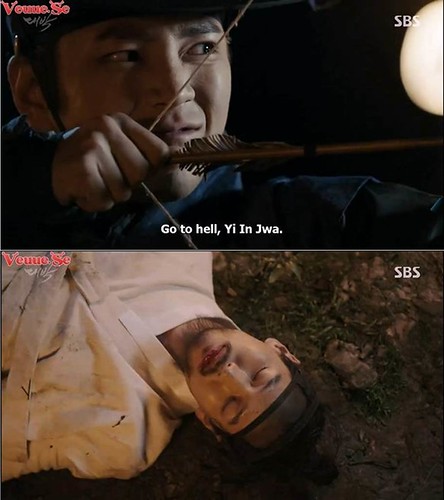 The soldiers use their bow and arrow but keeps on missing his target until Dae Gil takes over and take a handsome shot! A bulls-eye! As expected, when they brought the body over, it was not In Jwa but his man wearing In Jwa’s clothes. In Jwa had escaped death again! 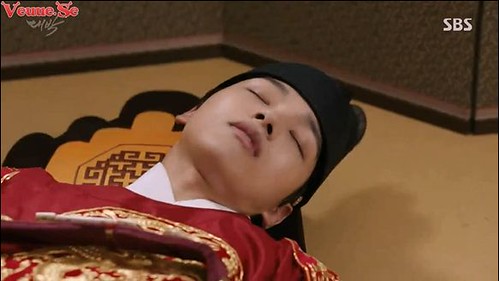 While these were ongoing outside the palace, the Soron ministers are planning to assassinate the Crown Prince Yeoning because they could not accept a half blood prince / son of a maid taking over the throne after knowing the ill-fated King’s condition. There were two attempts to kill Yeoning. First attempt serves as a wake up call for Yeoning to continue living. Second attempt makes Yeoning choke and faint after eating his food that was said to be a dangerous plant that could kill him if it is being eaten the wrong way and not “poison”. Yeoning who doesn’t wish to die approaches his brother, the King to save him from being killed by the ministers. Sadly, the king denies to offer him his hands as he says that this is the same case like how the Noron ministers doesn’t want him to be the King. Yeoning clenches his fist and tells himself that he doesn’t want to die. 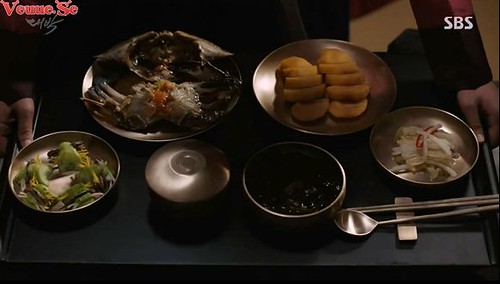 He then brings food to the King in which includes the dangerous plant in one of the bowls. He wanted to ask the royal helpers to taste the food but the kind refuses to do so. The king had thought to himself that Yeoning had made his final decision to poison him. When Yeoning turns his back to leave the room, the King with sorrow eyes utter the word Sorry to him. “I will ask for forgiveness later” says Yeoning silently. A cry is heard after Yeoning left the King’s room which states something is happening to the King. Yeoning just stopped and stared at the space blankly without looking surprise….
—

MY THOUGHTS
I am utterly shocked and disappointed knowing what Yeoning had done to save himself by poisoning his own brother, his blood even though they were not close to begin with. It is true on what the king had said earlier, the palace will keep on flowing with blood. I am starting to agree with Yi In Jwa on making Dae Gil the King if it was his doings even though Dae Gil has no intentions of becoming one. Yi In Jwa had escaped death way too much. I’m wondering why they haven’t arrested his best men especially Jin Ki who is known to have escaped from the prison. Since we have few episodes left, Jin Ki might still be alive and continue to help Yi In Jwa who is hidden somewhere and will carry out his other plan which I believe will be outsmarted by Dae Gil with the help of his father, Man Geum. From the beginning, the story is about taking avenge on one another. They had spent their whole life hating each other especially In Jwa whose family had been killed by the late King. Most of them take another person’s life easily. All the princes lives could have been different if they were no differences made between them, if there were cared and filled with love by their loved ones especially by their father. They grew up with hatred, sadness, frustrations and loneliness which made them incapable to love one another. Its sad the brothers had turned their backs on one another. Unlike Dae Gil who received love from Man Geum and his grandfather. His master Chae Gun had also taught him that he has a choice to use his sword; to save people or to kill people…… [END]

1 thought on “Thoughts on ‘Daebak (The Royal Gambler)’ Episode 21”