Great! Jang Keun Suk is on newspaper of El Salvador! Thanks for sharing, Caroline 😀 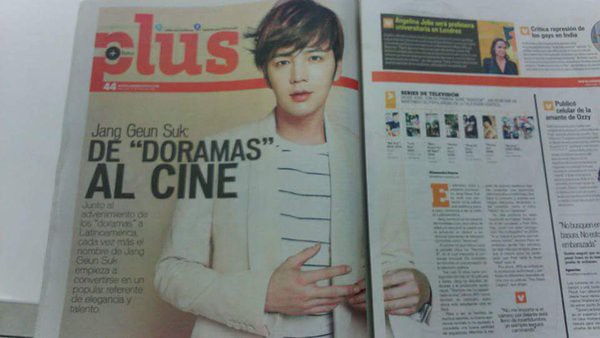 Along the advent of the “dramas” to Latin America, increasingly the name of Jang Keun-suk starts to become a popular benchmark for elegance and talent.

The talented actor and singer South Korean Jang Keun Suk is a sensation in Asian pop culture and, gradually, becoming a success in Latin America.

Jang began in the modeling industry at five years of age and discovering his passion for acting was spent auditioning for television series known as “dramas”.

The first role he obtained for the small screen was “Nonstop 4”, which played the main character. He immediately became a sensation of the Asian television.

After nearly 10 years as a star of over 14 films and series, Jang has decided to engage in audiovisual production. “I’ve always been passionate about movies,” said JKS, as it is also known, who is now studying film in Seoul.

Despite being a man of many talents, his good looks too has helped consolidate a lot of followers. While most Asian actors seek to project a more masculine and mysterious appearance, Suk does the opposite and exploits her delicate features, leading him to be known as the “tender” of the “dramas” boy.

His personal life has given much to talk about. Especially when linked to Park Shin Hye, actress who starred in “You’re Beautiful” in 2009. “Her mom would like us to be boyfriends,” said Park; however, they never have admitted to be more than friends, although the same actor has confessed that Park would be the “ideal” woman for him.

For now, JKS focuses on audiovisual production and participates in different film festivals with his film “The Great Legacy,” which addressed.
—
by Alessandra Ramos

3 thoughts on “[article] Jang Keun-suk: From “dramas” to the movies (from El Salvador newspaper)”