At the end of episode 14, Baek Dae Gil finally remembered his birthday and told Prince Yeoning, which brought the latter in shock — realizing it was the same birth date of his supposed to be “dead” older brother. 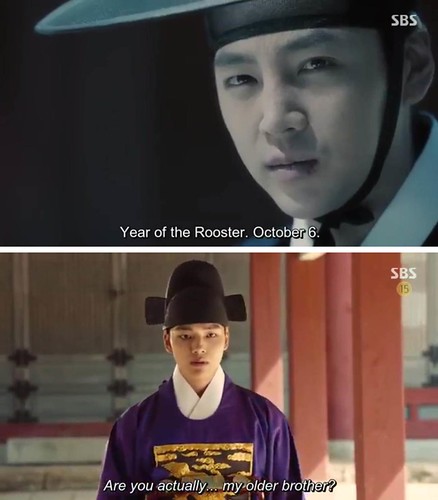 Lee In Jwa showed Hwang Jin Ki the so called Jeonggamrok, a banned book of prophecy predicting that a man named Jeong will end the Yi’s Jeoson and starts a new dynasty. The thing is, even Lee In Jwa didn’t know who this Jeong is, but believes that he is just an ordinary man. 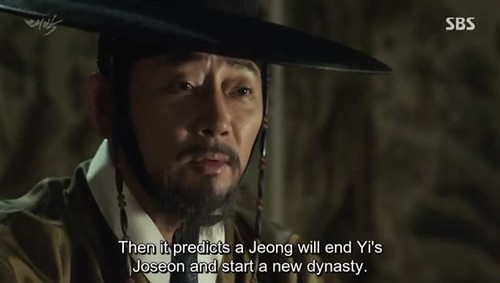 In Jwa narrated an old story of rebellion to Jin Ki:
Years back, a group of rebels gathered and preparing to attack the kingdom following the command of this man called Jeong. At the same scene, young Cutter (Dae Gil’s third gambler target) will appear to be part of the group together with his father and younger sister. Here comes the military officials conspiring with the rebels to inform them that they are ready for the attack to kill the King, and they will take care of the aftermath just to replace the current dynasty. 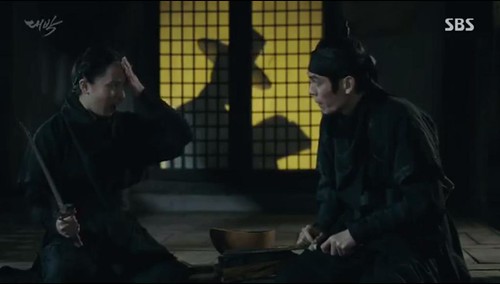 The people believed that the rebel leader Jeong is the one that the book is stating. But what the king fears most is not about the rebels, but the prophecy itself.

Back to the palace, Yeoning rushed to see his mother, Lady Sukbin (who is currently ill) to confirm his suspicion, and he guessed right. Lady Sukbin explained in tears the reason why she decided to be separated from her newborn baby. Everyone in the palace, even the King, wanted him dead due to his early birth. That she and Yeoning would not have been in their rightful places right now if not for that sacrifice, and how much she feels pained to imagine Dae Gil suffered growing up without a mother, and experience severe hardships in Lee In Jwa’s hands. 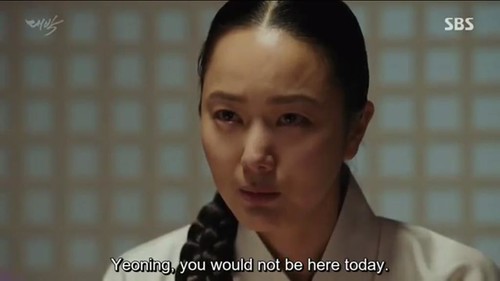 Yeoning told his mother that Dae Gil was already released in prison, which made Lady Sukbin more worried knowing that the king won’t do anything without a gain. To make it clear, he talked to the king and directly asked the real reason why he let Dae Gil go and catch Cutter. The king gave back with a question about Yeoning’s inner thoughts, and how much does he know. Yeoning replied that Dae Gil is Baek Man Gum’s son, Kim Chae Gun’s pupil, and his friend. Upon hearing the last words, the king strongly disagreed and told him that Dae Gil is just their hunting dog.
“After the rabbit hunt is over, hunt down the hunting dog and kill him to eat.”
The king finally told Yeoning why he wanted to catch Cutter, it was because the later is part of the palace attack that happened years ago, but he managed to escape and stayed alive. And the Jeonggamrok was leaked from Cutter’s gambling game. So for them to cut out the root hiding behind In Jwa and Cutter’s back, they must send Dae Gil to trace the so called Jeong, and stop the prophecy of ending their family dynasty. 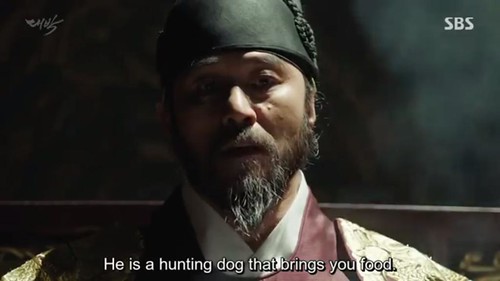 The king gave an order to Yeoning to look for the detailed record about the rebellion incident so he can have a clue of Jeoung’s identity.

Lee In Jwa discussed to his two guards the three goals he wanted to achieve in the current state of Dae Gil hunting for Cutter. First, is to redirect the arrow pointing at him towards Cutter, second is acquiring the list of personalities who hired Cutter to assassinate the palace officials, and third and the most important goal, is to find out the identity of Jeong. Jin Ki dumbly asked if Jeong will be the next king, In Jwa answered that he actually did not believe the prophecy. Because neither he nor that Jeong will be the next king, but Baek Dae Gil.

Dae Gil arrived at Cutter’s gambling house. Gol Sa’s daughter and even Dam Seo was there to witness how the two would face each other. The game started: there is no rule and anything goes. By that, Cutter’s men started to attack Dae Gil but they all got pinned down. Gol Sa’s daughter took part in shuffling the cards, which made Dae Gil got her secret message. He challenged Cutter for a fight using only his one arm. Seol Im tried to stop them that she almost got stabbed if not for Dae Gil’s quick rescue to grab her. Cutter got the chance to pick his target card, only to find out that it was not the 10 card they were fighting for. Gol Sa’s daughter furiously asked him why he killed her father, but his wrong choice of reply gave her the confirmation, and that time Cutter finally realized that he was being tricked by Dae Gil to make him confess his crime. Not able to accept his loss, Cutter removed his arm cast and challenged to fight with Dae Gil, which the latter confidently accepted. As expected, Cutter lost the fight and Dae Gil asked him again why he killed Gal So and if In Jwa was behind the assassination. Cutter confessed that it was indeed In Jwa who hired him to kill Gol Sa, but it was not the main factor that made him do the crime. He was meant to kill him because of Seol Im, her resemblance to his little sister, who died in the palace attack, made him fond of her and took the responsibility to get her revenge from Gal So (who killed her father). After the confession, Cutter finally accpeted his loss to Dae Gil. 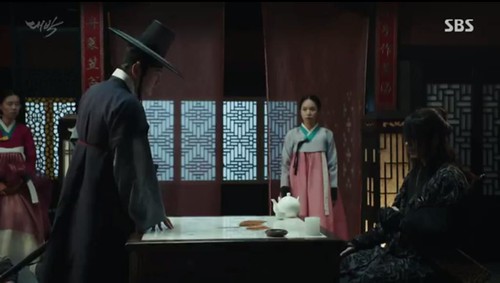 Yeoning arrived to the gambling room together with Kim Jeong Yeol, the servant of rebel leader Jeong based on Palace Minister Kim Chang Jib’s information. He asked Cutter to reveal who the so called rebellion-mastermind Jeong is, but knowing he will not talk anything that will give them the answer, he decided to bring Kim Jeong Yeol to look around the gambling room and see if Jeong was there but Jeong Yeol said that the leader was not there. Trusting his statement, Yeoning told him to go home and ordered the guards to arrest Cutter. The latter requested to sip his wine for it is his last time to be in the gambling house, dropped two pieces of small beans onto the wine that poisoned him to death. Before taking his last breath, Cutter told Seol Im he was thankful that she made him happy at least for a while. That scene made a different image on Cutter being a cold and serious gambling lord/assassin to a warm-hearted older brother longing and missing his younger sister. 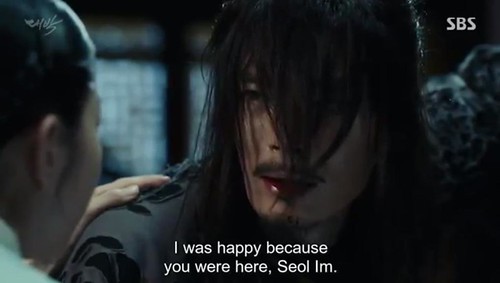 On his way to the gambling house, In Jwa came across Kim Jeong Yeol. Seems like they already knew each other, In Jwa asked him if he’s the one to be said in the book of prophecy and upon hearing that, Jeong Yeol straighten up his head. 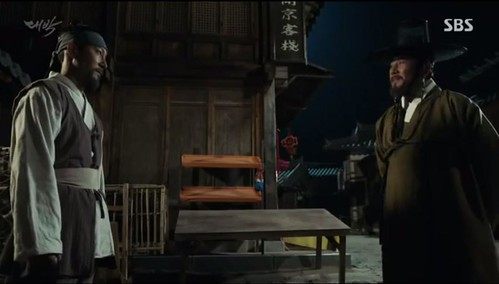 In Jwa gave a suggestion to join their forces against the king, which made him interested and reveal his true name, Jeong Eui Ryang. He handed a flower to In Jwa and told him to meet again someday, giving a quip of their agreement.

Dae Gil saw In Jwa and told him that Cutter killed himself and that he is the only one that’s left to his targets. Yeoning also came, and In Jwa got the chance to strike and reveal to Dae Gil his true origin, being Lady Sukbin’s son. Both in shock, Dae Gil could not utter out loud what In Jwa told, and just left Yeoning. 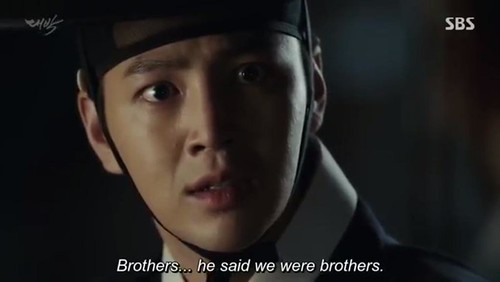 In Jwa explained subjectively to Dae Gil the history of his mother, from being a water maid, until she became the king’s royal concubine. Dae Gil didn’t want to believe the truth, but In Jwa raised his suspision to conciousness about Lady Sukbin’s extreme concern on him while he was beaten up by the palace guards. And finally, In Jwa spilled the beans by revealing that Baek Man Geum is not his real father, but it is actually the king. 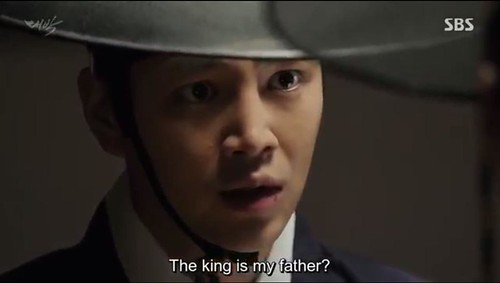 —
Nikki’s note:
The whole episode was full of strong emotions. I must admit to be almost crying while watching Cutter’s dying scene with Seol Im. I can feel his sincerity towards Seol Im and his pain and grieve due to the death of his father and younger sister. I missed Dae Gil’s humor in this episode but then, those smirk & evil smile when the lights turned on and Cutter was surprised to see him already in front of the table gave me chills.
The next episode will be more interesting for Dae Gil already knew that he & Yeoning are brothers, hope there’ll still be some “bromance” scene between the two, and uhhhhmmm oh I hate to say this but, also more romantic scenes for him and Dam Seo.
Hope you enjoyed my first ever review, and thank you for giving me this wonderful experience to be part of a very beautiful, brain-draining project, hehe! [END]

13 thoughts on “Thoughts on ‘Daebak (The Royal Gambler)’ Episode 15”