By Park Sojung
GOYANG, South Korea, May 20 (Yonhap) — Jang Keun-suk said Friday, despite having acted for more than a decade, “The Royal Gambler” has opened his eyes to his still latent potential as an actor.

“Through ‘The Royal Gambler’ I was able to contemplate on acting more deeply than before,” he told reporters on the set of the SBS period drama in Goyang, Gyeonggi Province. “The fact that I was able to discover more of my hidden potential is truly a ‘bonanza’ (laugh).”

He was referring to the meaning of the Korean title of the series, “Daebak.” 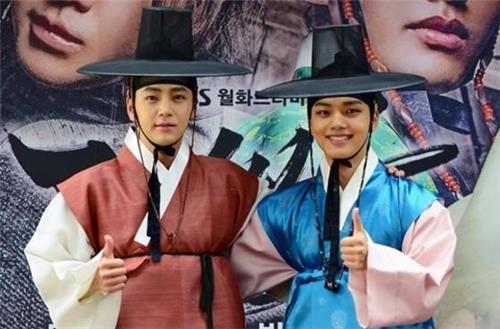 Actors Jang Keun-suk (L) and Yeo Jin-goo pose for photos at a news conference on the set of the SBS series “The Royal Gambler” in Goyang, Gyeonggi Province, in this photo released by SBS on May 20, 2016. (Yonhap)

In the Monday-Tuesday night series, Jang stars as Baek Dae-gil, who is born to Joseon Dynasty (1392-1910) King Sukjong and a maid who seduces the monarch to become a consort. Soon after his birth, however, the maid abandons the son to her former husband, who raises him to be a skilled high roller.

Later, Baek engages in a match with Prince Yeoning (Yeo Jin-goo), who is King Sukjong’s second son, in which Baek wagers his life and the prince his future throne.

Jang made headlines after playing the scene in which a famished Baek eats a wild snake raw. The actor said he had not expected to work with a real snake until he saw one brought to him in a net.

“I thought, ‘There’s no way they are going to make me eat a real snake,’ but they did,” he said. “The scene wasn’t hard, but I almost vomited afterward.”

Jang was proud of what he had done, which he said made the word ‘snake’ appear next to his name when typed onto a local search engine.

“Fans have described me as tenacious since then. The more experienced actors have said that was something they had not expected of me, which made me feel good,” he said. 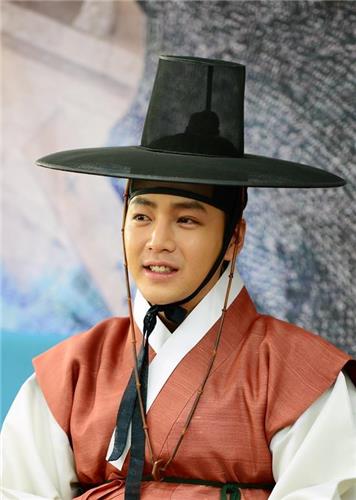 Actor Jang Keun-suk at a news conference in Goyang, Gyeonggi Province, discussing the SBS series “The Royal Gambler” in a photo released by SBS on May 20, 2016. (Yonhap)

Since its premiere in March, the series has performed moderately well in terms of viewership, with viewing rates hovering around 8-9 percent. With two digits considered “solid,” however, actor Yeo said he has not given up on his viewership aspirations.

“I would be lying if I said I am not disappointed by our show’s performance,” he said. “We still have eight more episodes to go. We aren’t giving up yet.”

The SBS series has competed with the KBS 2TV series “My Lawyer, Mr. Jo” and MBC’s “Monster,” all of which premiered on the same date and air in the same time slot. The actors, however, refused to compare their show to the two rivals.

“It’s difficult to compare the three shows,” Yeo said. “That doesn’t mean ours lacks the appeal of the other two. In our show, you should look out for the psychological suspense, which will continue through the end.”

Jang said he cared less about the viewership than staying true to the script.

“I was curious how the three shows would perform because they are all so different from one another,” he said. “But I never thought of trying to improve our viewership or to win the competition. I had no choice other than to trust the script. I have to believe in my character and the screenplay even if they may feel contrived at times.”

“The Royal Gambler” airs on SBS at 10 p.m. on Mondays and Tuesdays.

Actor Yeo Jin-goo at a news conference in Goyang, Gyeonggi Province, discussing the SBS series “The Royal Gambler” in a photo released by SBS on May 20, 2016. (Yonhap)