WARNING: If you haven’t watched the final episode, please be aware of spoiler from reading this article.
Original source: 10asia
English translation: Zoe from ECI 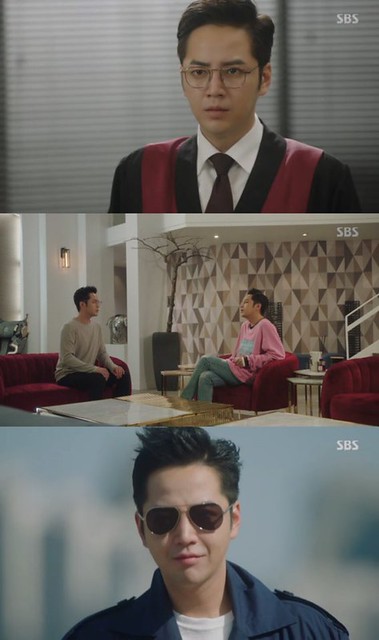 Actor Jang Keun Suk offered intense catharsis rounding off SBS Wednesday/Thursday drama “Switch – Change the World” (“Switch” in the rest of the article). The last episode was broadcasted on May 17th.

In the final episode Jang Keun Suk, who played both the swindler Sa Do Chan and the prosecutor Baek Joon Soo, proved that good triumphs over evil and ended the joint switch operation.

Additionally with every unpredictable twist he did a new reversal and gave us thrilling fun with his enthusiastic performance. Do Chan and Joon Soo’s unpredictable plans were compelling until the very end. Do Chan’s unusual strategy to throw a new bait to Geum Tae Wong (actor Jung Woong In) who had avoided the police dragnet, so that he had no choice but to be caught, evoked admiration.

Geum Tae Wong was arrested dramatically, it was a success, but it became chest thightening once again when Sa Do Chan faced the danger that his identity could be discovered. However it turned out that Baek Joon Soo, who had undergone a heart transplant surgery, had switched places with Sa Do Chan shortly before. Once again, the viewers got well deceived by these two men.

The two men demanded a death sentence for the man they had wanted so much to catch, Geum Tae Wong, and the switch this way ended with a successful outcome. Moreover it was implied that the cooperation between Sa Do Chan, now using his natural talent for swindling to make wicked people pay for their wrongdoings, and prosecutor Baek Joon Soo was continued, adding thrilling enjoyment until the very end.

Jang Keun Suk said: “Just like Switch’s Sa Do Chan and Baek Joon Soo changed the world, to me Switch is the work that changed actor Jang Keun Suk. A double role is an unusual challenge to an actor, so I felt a big responsibility, but I also enjoyed the film shooting all the way, and I’m really grateful to the viewers who enjoyed watching it. I’ll work hard in the future too to try to give you an even better performance.”