WARNING: If you haven’t watched this episode, please be aware of spoiler from reading this article. If you do not want to see, please do not click the link “Read rest of this entry”. We welcome all the comments and please share your thoughts too about ‘Switch’. Thanks.
Author: Carole Dela Rosa Alcala (a.k.a. chinkyrol) from ECI
Photo credit: SBS 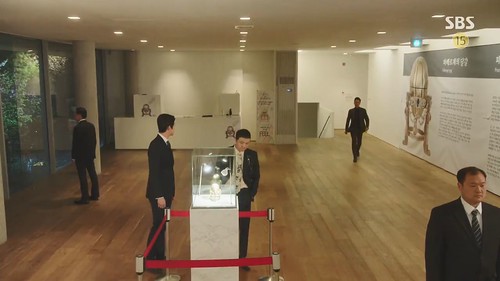 The episode starts off with Baek Joon Soo reporting to Geum Tae Woong about Sa Do Chan and his gang coming for the Faberge egg. Geum Tae Woong asked Joon Soo what he intends to do about Sa Do Chan and he said that he will turn him over to the police to whom GTW replied not to do but instead give SDC to him and not ask what he will do next. Enter Oh Ha Ra, asking if it was a trap and that GTW is planning to kill SDC. 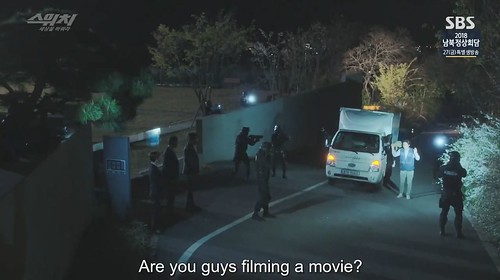 The scene shifted onto the van where Sa Do Chan and his gang are preparing to go somewhere and this is where it becomes tense as I assumed that they were indeed on the way to where the egg is. After few minutes of this, you see a van approach the gate and Joon Soo being informed of it and nodding at Geum Tae Woong (hmmm, so intuitive eh?!) He instructed that the egg be guarded well and they all went to the gate to “welcome” the “intruders”, only to be disappointed as it was not who they expect but somebody else delivering a lobster, even asking if they were filming a movie. 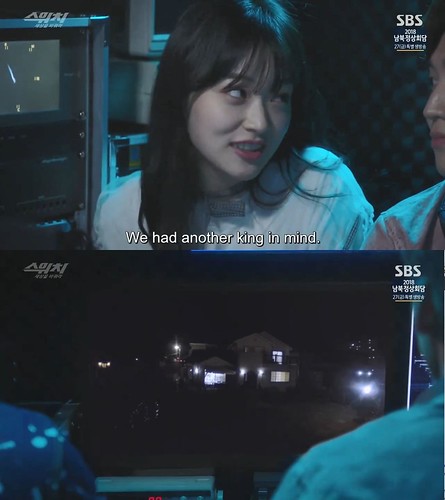 And on another part of town, SDC and his gang is looking at their intended target. More bad news came as GTW was then informed that Russia wanted their egg back and he said to let them get it while Joon Soo looks on musing about what happened. The scene then shifts to Sa Do Chan and his gang talking about another job while reading the news about Russia getting the egg back revealing that it was never their target in the first place. After which the scene shifts back and forth, an indication that the two opposing sides are trying hard to guess what the other’s next step is and us wondering who will emerge victorious in the end. 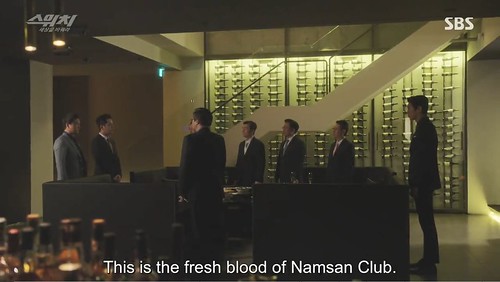 This episode is titled “Secrets blend in while the truth gets revealed” and indeed this is where a lot started to unravel. It began with the seemingly untainted district prosecutor who retired just in time to get into politics and then inviting the press in his home to show the public how “perfect” his life is. Meanwhile, Baek Joon Soo gets embraced by the Namsan Club and we continue to wonder how this has come to be. So many questions being left unanswered and all we can do is watch some more (as if we weren’t hooked enough as it is, lol!!!) I must say kudos to the writers, such clever guys. 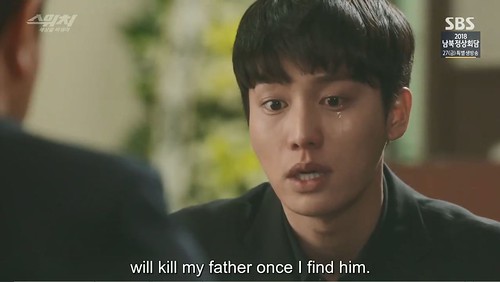 How about that scene where Geum Tae Woong remembers the year prior when he helped out the son (Sung Doo) of a friend from his hometown? When Sung Doo told him his goal of finding his father to kill him because he abandoned his mother, something is smelly there as well. 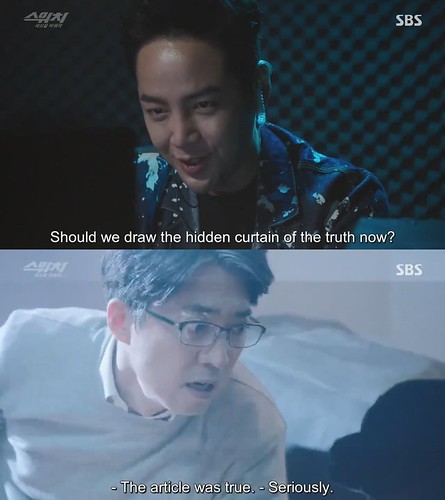 Now, we go back to the former district prosecutor who will be getting what seems to be the start of the end (spoiler much!) for him thanks to Sa Do Chan and his gang. This was his target all along, revealing the Terracotta Warriors hidden in the home of the former district prosecutor while Oh Ha Ra alerted the authorities of this development. In the meantime, GTM gets the bad news about the district prosecutor while the Namsan Club just cheered for the latter’s success in his election bid and we see him later seething with anger as he cannot accept that he was deceived. More bad news as it seemed that Sung Doo appears to be working with SDC. Before this episode ends, we get a glimpse of Sa Do Chan’s father (yes, more questions) and Man Ho reminiscing back to that fateful day 6 years ago when he found himself in a predicament and he called up SDC asking for help making him leave that important exam. 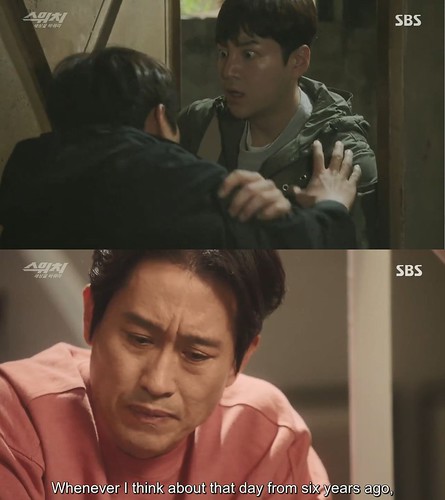 The episode started with Man Ho finding something really disturbing in a warehouse where he thought his brother was and he ended up being chased and was left with no choice but to call Sa Do Chan just as he was about to take the bar exam. SDC did not hesitate and got into a taxi right away and rescued Man Ho. The scene came back to present day where Man Ho expressed how sorry he was for making SDC missed his exam and his chances of being a prosecutor. This is where my heart (literally) melted for our dear AP once again, he immediately comforted Man Ho saying that being a prosecutor was not for him (AP smiles at the thought, while I’m getting tissue to stop the drooling *wink*) but rather, to think about how fun they are having now. 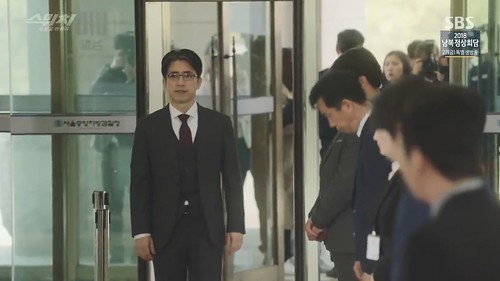 We see next how the new district prosecutor is having a meeting with her staff while Baek Joon Soo and Geum Tae Woong are having another kind of meeting where GTM instructed BJS to acquit the former district prosecutor legally. I am left wondering why BJS seems to have no reaction when he appears to be siding with GTM since the previous episode, he just goes with the flow and not saying much, something is amiss. Oh well, might as well just stare at that beautiful poker face. Meanwhile, the former district prosecutor showed up to his former office, he called his successor first and he was assured that he need not worry. And indeed he did not seem worried with all that media attention and his former employees bowing to him, in fact he felt really entitled (which really irked me, grrrr!) 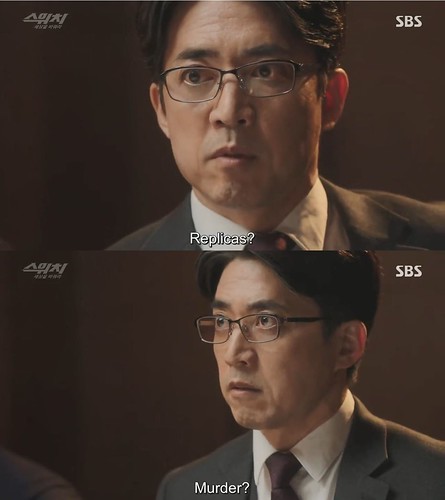 I distinctly remember writing on the previous episode how everything is starting to unravel and yes, that moment has now come for Jung Do Young. I love how the next scenes are like watching a suspense thriller with the music, the fidget spinner on SDC’s hand and all that waiting and the shock on the new district prosecutors face, all these and still BJS is poker faced (still staring, and drooling has resumed *wink*) Whoa! Finally, JDY has been served. And he even confessed right away. Nice one, Oh Ha Ra! *thumbs up* 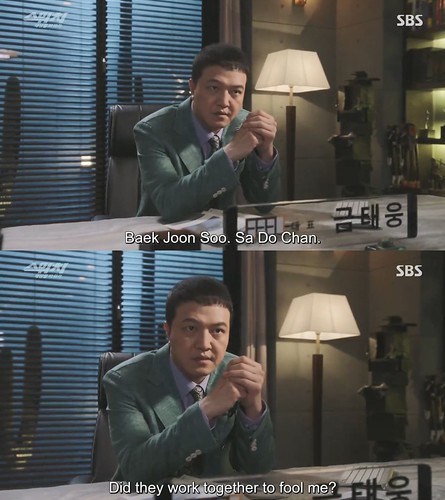 When the news reached Geum Tae Woong, he asked who the prosecutor is and knew right away when told it’ll be Oh Ha Ra. He knew the connection with Sa Do Chan and he realized just how much he was played when he remembered the Janggi pieces. I have watched this actor who plays GTM in some other dramas and he is amazing. He plays his part so well.( *applause* *confetti*) We now go back to JDY, he was brought to his cell and left to wonder who deceived him with the Terracotta Warriors, even at his realization and with tears in his eyes, it is hard to feel sorry for him. Once again, SDC’s father told the story of the Terracotta Warriors to Detective Kang and we now know why he said last time that he ruined his son’s life. He blames GTM and will stop at nothing to expose him. Okay, here’s the thing, imma skip scenes, not to say that they are irrelevant but just seeing that 2 APs in one scene (major drool alert!) and smiling! How? Where am I? Who am I? Unravel is the word best to describe both episodes and that smirk by GTM when he finally connected all the dots at the end. But then again, I cannot really remember much with SDC feeling comfortable in his seat as he finally revealed to Oh Ha Ra just who masterminded that great con (*tissue rolls on the floor*; *wink*) [END] 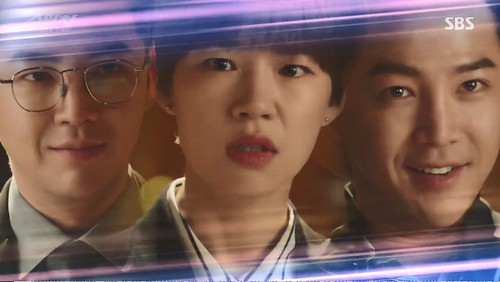