WARNING: If you haven’t watched this episode, please be aware of spoiler from reading this article. If you do not want to see, please do not click the link “Read rest of this entry”. We welcome all the comments and please share your thoughts too about ‘Switch’. Thanks.
Author: Nikki Manio from ECI and JKS Philippines Fanclub
Photo credit: SBS 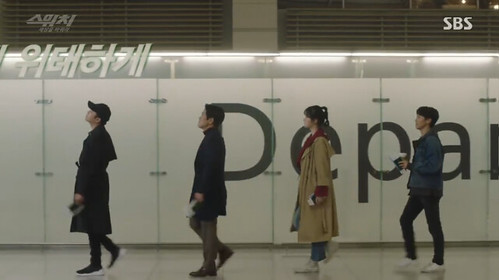 So the episode 2 ended with the furious Oh Ha Ra when she realized that Sa Do Chan actually conned them, the prosecutors!
Continuing on episode 3, she vents her anger by cursing Sa Do Chan endlessly while she’s on her way to chase him and his gang. Meanwhile at the airport, the group is excitedly planning where to eat curry in Maldives and then out of the blue, Oh Ha Ra appeared. Sa Do Chan will later find out that Oh Ha Ra has put a tracking device on his phone when she confiscated it at the prosecutor’s office. 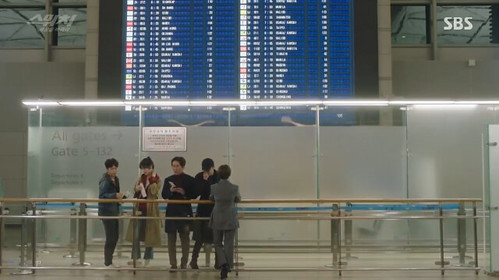 Also, it is revealed that the gambler and another gang leader Jo Sung Doo is somehow connected to Geum Tae Woong and the latter will confirm his suspicion via Jo Sung Do’s statement, that Prosecutor Baek Joon Soo is still alive, giving his secretary a fierce look knowing he failed the mission to kill the prosecutor. 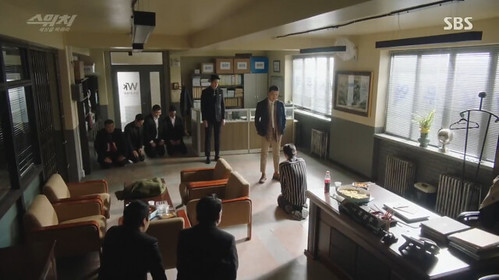 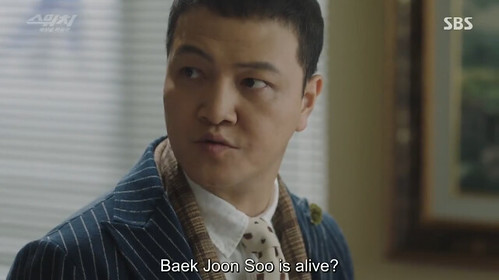 During Oh Ha Ra’s interrogation on Sa Do Chan, who is still insisting that he also doesn’t acquire the “item”, a call from Nam Seung Tae will back-up his claim and admits that he has the item and will exchange it with $100,000. 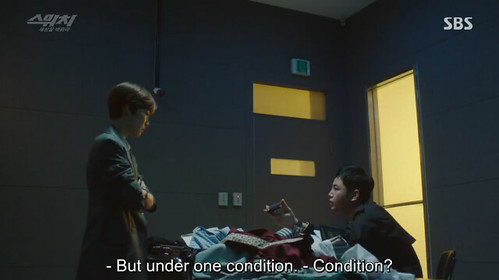 At the other side of the line, we will see a bloody Nam Seung Tae being captured by Geum Tae Woong. Seems like he had no choice but to speak up about the whereabouts of the “item” and bargains with Mr. Geum to spare Prosecutor Baek Joon Soo, but Mr. Geum decided to end everything with the prosecutor (meaning kill him still). 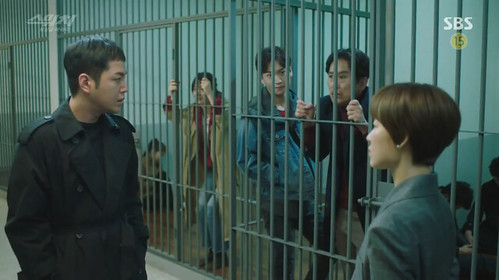 Back on the interrogation room, Sa Do Chan is ready to go when Oh Ha Ra stopped him and making a new offer to work with them (again) in one week time. Chief Yang decided to use the Expense for Special Activity funds to grant Nam Seung Tae’s condition, but they have to wait for a week for them to produce the amount he’s requesting. Having no choice, and showing loyalty to his gang, Sa Do Chan accepted the offer. 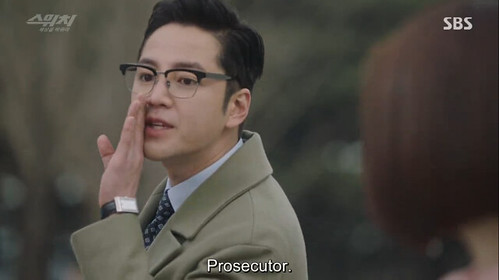 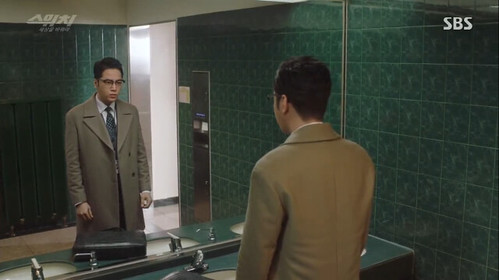 So finally, after carefully reviewing Baek Joon Soo’s profile, along with the people he used to work with, Sa Do Chan entered the Public Prosecutor’s Office and started to work as Prosecutor Baek Joon Soo. The first day of work wasn’t easy as expected, because of their different personalities being mixed-up and get the people at the office confused, and finding excuses during conversations like when Investigator Ko told him that they have met before, also at the meeting when Deputy Chief Jin put him on the hot seat and questioning why he went to the Spain Cultural Center. Chief Yang had to make a lot of excuses for him not to be found out. Not to mention when his mentor came to visit the next day and noticed the sudden change of his appearance and personality. 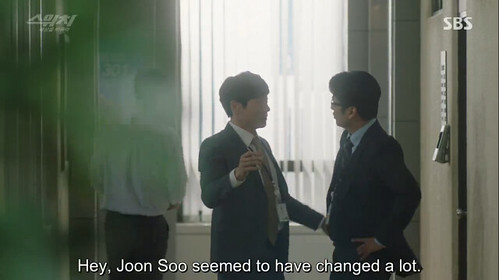 Meanwhile, at the Association of Korean Industries, Former Minister Choi Jung Pil gave a speech about the business industries of the country. He seems to be a good on the outside and bad on the inside character since later after the speech, he went to meet some high ranking people (maybe politicians or businessmen) and seems to be plotting something against the current administration. We also saw Geum Tae Woong alongside with the former minister so we can guess that he is more influential and has a great big group backing him. 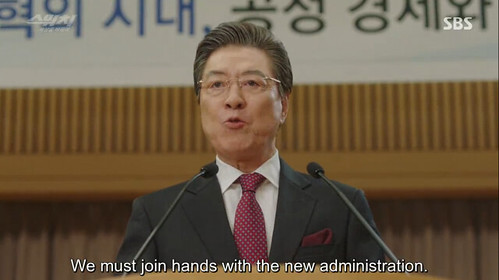 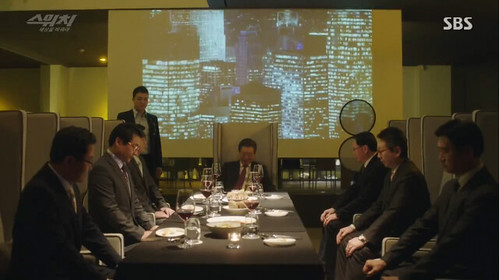 Jo Sung Doo was assigned to watch over Nam Seung Tae but the latter deceived him and upon their commotion, Sung Doo strangled Seung Tae with his belt that caused his death. 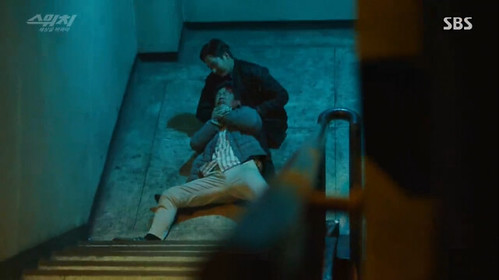 Back on the prosecutor’s office, the powerful and most admired chief of Public Prosecutor’s Office Jung Do Young assigned a case to Baek Joon Soo, as he used to be familiar with it. The case is about LSDT, a newly developed drugs from Columbia in which the syndicate uses pregnant women to be the drug mules. Joon Soo and Ha Ra went to the hospital where the recent victim/drug mule was admitted. Joon Soo got the chance to talk to the victim/drug mule’s child and felt like he had to do his “job” as a prosecutor and dig up about the syndicate behind it. 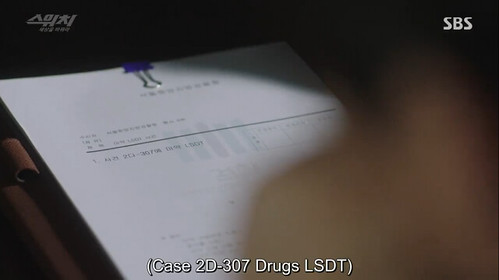 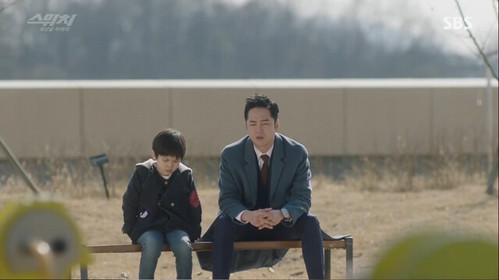 Sa Do Chan, with the help of his gang members, came up with a plan to get into the syndicate’s base. He got the hint of the whereabouts of the syndicate with the lollipop that the child gave him earlier in the hospital. But then, as they thought their plan is doing well, Sa Do Chan was kidnapped by the syndicate and it turns out that already knew his identity as Prosecutor Baek. At the storage room where he is being locked up, Geum Tae Woong’s secretary showed up. He tried to negotiate with the secretary by revealing his real identity, but as he was about to shout his real name, one of the kidnappers hit him hard making him lose consciousness. 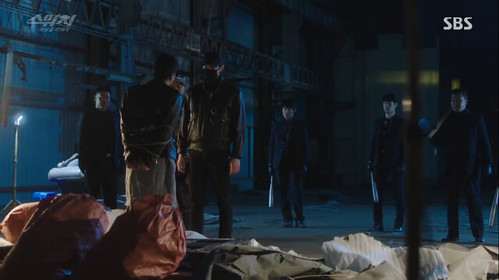 At the same time, a group of unknown masked people came to the rescue and one of them came to find him and put a mask on his face. He tried to recognize the man but one kidnapper attacked the man and by that, his artificial hand fell down. Sa Do Chan also started to lose consciousness again… 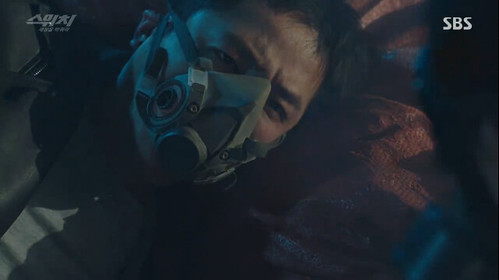 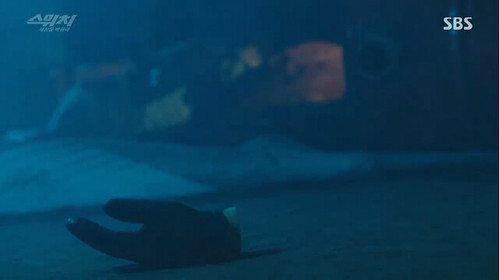 SIDE NOTE:
Sa Do Chan had a nightmare. It is still unclear but by the looks of it, a child (maybe him or maybe not) is witnessing an old man being strangled by what him called “Grizzly”. As he woke up, Director Bong entered the room and asked if he was having the same nightmare again. Director Bong tried to persuade him to postpone the operation (the plan to get into the drug syndicate) because it seems like whenever he had that nightmare, things didn’t turn out as planned.

WRITER’S NOTE:
Whoa! I can’t believe it’s already been two years since I last wrote an episode review. Looking back, I still got chills whenever I come to complete the article. I don’t know how or what to expect from the reader’s, but still, knowing that it’s for JKS, I feel more motivated and inspired to write.
Also, I realized that I really missed him so much! Waaaahhh *cried*. I may not be as active as before because of the new journey me and my daughter is heading right now, but deep in my heart, there is still JKS. Watching him back on screen after two years, I saw how much more he improved as an actor and as always, his choices are always right. This drama is quite challenging for him because of the new kind of character/s he had to portray, but so far he is doing really great giving justice to the role. Indeed he is JKS, the actor that first got my attention and caught me with his sincerity. He never fails to amaze me every time!
So for that, let’s enjoy the upcoming episodes together and see what will happen to the characters and unveil this legal (and illegal) battle between the corrupt world and our hero, Sa Do Chan! [END]