My mother is also his eel. It’s her 2nd FA written in English. This time I was too busy on work and didn’t try to apply for myself. But my mom got a great luck and enjoyed herself fully. I was really happy to see her excited face after the event. I hope everyone feels her excitement through reading this. (Her 1st FA was about Tokyo Dome concert. Here’s the link.) 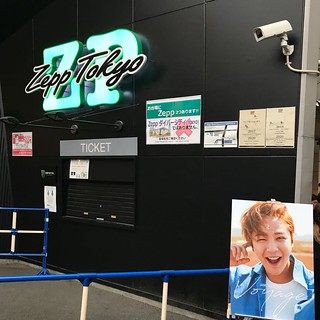 Written by tenshi_akuma’s mother, Haru
Photos were shared on Twitter
—-
I was really, really happy to be there, Zepp Tokyo. It was very miracle for me to be chosen on the second drawings, not on the first ones. You might have known about the probability, but let me tell you, the chance of getting the ticket was one of the 1,200 among 45,000. Wow…amazing! Please imagine my surprise when I heard Gun-chan explained about the number. The miracles continued. My ticket number was 219 indicated the seat place. Very close! 6 lines from the stage in the center, where was just in front of Gun-chan…. No fence, No head of other attendees. I could see him clearly from the front. Unbelievable!!!!! One more good thing was the lady next to me. She had a beautiful Red blouse with shining jewelries and a shining fan she made by herself. She stood out among the others. That means Gun-chan always seemed to look at us! Sorry, sorry, everyone!
I really appreciate this chance all of you gave me.
I made my decision to write to you about the details of the show as a lucky one as much as I could. Sorry to my broken English. 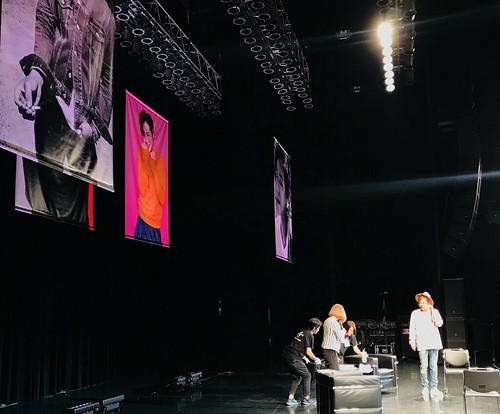 About the contents of this Event show, I’m sure you want to know everything. I will try to share what I remembered as much as possible. The event show started at 18:00 as scheduled. There were two black square rubber sofas and a small table on the stage. Four banners that ‘Voyage’ JKS cover images were printed were hanging from the ceiling. MC was Yumi-san. At first, we heard the song of Voyage from the speaker. MC Yumi appeared and apologized to us, “All of you expected to show up Gun-chan first, not me.” She is genius to have a sense of humor and always very interesting. As soon as she called Gun-chan, a storm of applause arose when he came in. The calling of “Gun-chan” and the shouting of “Kawaii (Cute)” spread through the venue ground. He was wearing a nice pink and gray sweat shirt with a cool hat. He was really cute and looked gorgeous. He looked very thinner than before. His smile was wonderful!! 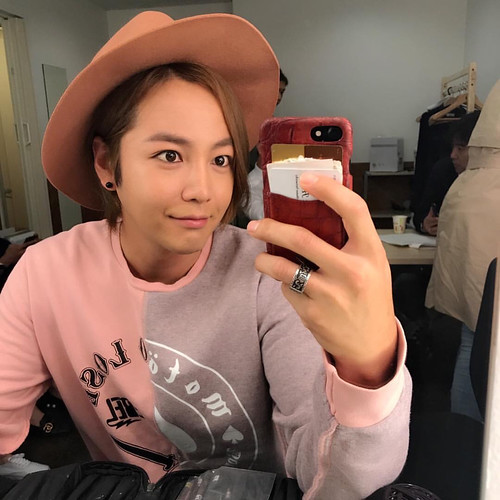 The show consisted of two parts. One was answering the questions from us. The other was present games. Let me explain one by one.

１.Gun-chan Answers Our Questions:
[1] At first, he picked up one card which was a yellow and long narrow piece of paper from the box. And he handed it to Yumi. She read it in aloud. “Seat Number???” (Sorry, I forgot the number. What I can say clearly, it was NOT my number…) She continued to call the name and address. “Congratulations! Raise your hand, please.” Gun-chan confirmed which lady she was and he waved his hand to her. (so sweet)

Yumi said, “The first lucky person is a mother.” She continued reading her question, “I have a 17-year-old son who always smells very bad. Please give me an advice to deodorize his bad smell. How was Gun-chan around the same age?” 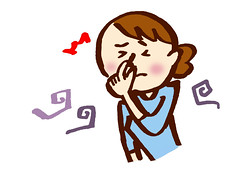 Gun-chan answered “I was not smelly. I was a clean boy when I was 17 because I didn’t like sports.” Everyone laughed and laughed. Yumi said “You want to say to use perfume, don’t you? Prince.” Gun-chan laughed and said, “Hahaha, it could be. But my answer is to keep your son’s body clean everytime. In addition, I recommend your son to take herb medicine. I mean it’s better to cure from inside of the body, not from outside!” Everyone agreed, nodding.

[2] The second question,,,,, (Ladies, guess how I was so nervous and expected if my number 219 would be called,,,,,,,. And also imagine Gun-chan was just in front of me,, Very,Very, Very Close… less than 3 meters. Unbelievable. I had already sent the questions mail, not to mention. My heart seemed to beat so fast crazily. BAKUBAKU is used in Japanese to express the situation of sound, a kind of an onomatopoeia.) Sorry to talk about myself long.

Yumi said, ”The next lucky lady is from Saitama. Her name is xxxx. Please, raise your hand. Where are you?” (sigh… She was behind me.) Gun-chan confirmed her face. Yumi said, “Her question is as follows; I am a 18-year-old high school student now. Can my age be eligible of your marriage? Please marry me.” 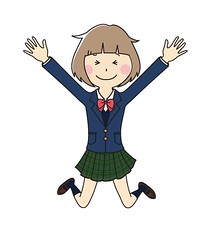 After reading it, Yumi said, “Wow! What a direct offer! Youngness is no fear!!” Gun-chan answered, “First of all, graduate from your high school. Then, keep in touch. I can’t say anything more now. Because,,,, it would be a kind of criminal to say something to minors.” Everyone laughed and laughed again. He is really smart.

[3] Yumi read the third question, “I know Gun-chan is the only child. If you could have another brothers or sisters, which brother or sister would you have wanted? Elder brother or younger brother? Elder sister or younger sister?” Gun-chan answered, “I have definitely wanted a younger sister. When she played
outside late at night, I would come and pick her up soon with pleasure.” Everyone clapped their hands. I wish I were his little sister!

[4] Yumi read the last question. “On the day of the end of the world, what would you shout and to whom?” Gun-chan answered “Wow, I’ve never thought of it. Never. How about you?” He asked her back and she immediately said, “Me, neither.” Gun-chan added, “The only thing I can say now is I will never regret my life when it ends.” As he always says so, I am sure he would feel then for sure.

2. Playing Games to get a present
[1] Oppa! Shouting Game
Yumi said to us “Let’s practice shouting your love loud to him. All of you are divided to 3 teams A, B and C. Each team competes each other. The biggest voice’s team will win and get Gun-chan’s photograph!” (Kyaaaaaaa!!! We already started shouting when we heard the gift!) Each team tried to shout louder than other one. We practiced calling “OPPAAAAAA~~~~~!!!!” loud. Gun-chan was holding a machine to measure the loud sound in his hand. The practice ended, then the real game started. Each team shouted, “OPPAAAAAA~~~~~!!!!” 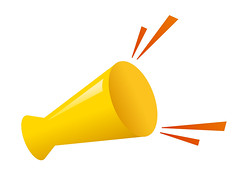 [2] Golf Game
Yumi asked Gun-chan “What were you hooked on these days?” His answer was “Of course, Golfing.” Yumi continued, “Why don’t you give your photos to more eels by your playing golf?” Then, something like toy golf putter and a target board was settled on the stage. The square target board was made of plates drawn the numbers from 1 to 9. 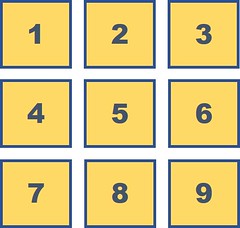 Each plate had team’s name, A, B and C on the back side. “If you hit one of the plates, that means the team will be the winner. But, if you hit the number plate 5 which is hanging in the center of the board, everyone will get his photos!! (Wow!! The big shouts arose to support this great luck.) You have one chance only.” Gun-chan waved the patter several times in the air to practice. Then, he shot a golf ball. 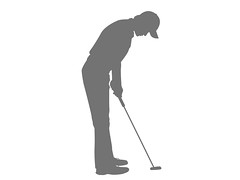 Wow! It was hit exactly number 5!!!!! OMG! We all were so excited to witness the miracle.

[3] Winning Numbers (tickets)
Yumi explained about presents they prepared for today. “Gun-chan prepared more presents for you!” Lucky winners were selected by his picking the ticket numbers from the box.
1) Big Gun-chan’s photo postcards to nine attendees.
2) The Red pair of shoes that Gun-chan was truly wearing during the album was recorded. The winner sitting on the second floor was young and very excited. To the question “Will you wear the shoes?” She answered, “NO. I’ll take good care of it and display it on the nice place in my house as my treasure.” 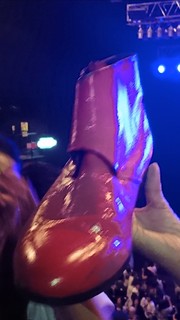 3) The colorful-pattered aloha shirt that Gun-chan was wearing in MV. The lucky lady, she was sitting near me and looked very happy, put the shirt on over her shoulder and said, “There is still very nice smell!” 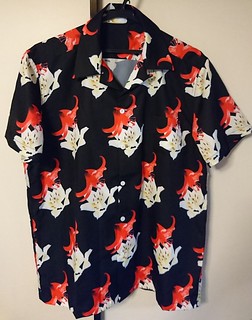 4) “The last present! “, Yumi shouted. “You know what it is, everyone. Gun-chan is very good at drawing portraits. In short, he will draw the lucky winner’s portrait on the stage. You will come to the stage and sit on the chair just in front of Gun-chan until he finishes the drawing.“ She continued, “Does anybody want to be drawn by him? Raise your hand!” I raised up my hand immediately! —–Guess, ladies, what happened next? Not only me but also many did. Even though I was sitting on the seat just before him, very near, I did it! What brave I was! (I’m here, I cried at the top of my voice in my mind.) I raised my hand faster than anybody else, I think. Needed much courage for me! At the result, Yumi said, “Thank you very much. Many people raised their hands, but we have to do this round fairly too. Gun-chan, pick up the number from the box, please.” To my regret, no miracle happened. He picked up a different number.

The winner who looked not so young with long hair went to the stage and sat on a chair in front of him. She seemed very happy but a little nervous with looking downward. The distance between Gun-chan and she was about one and half meter. He began to sketch soon. He gazed at her and moved his hand quickly for about 5 minutes. He said, “I finished!” 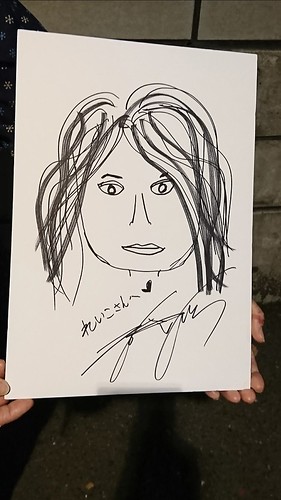 It was really good and somehow it looked like the winner. The moment he gave her the portrait she held out her hands and shook hands with him.

At the end of the show, Yumi left the stage first. That means there were Gun-chan and eels only. He spoke to us. “Thanks to you, the album ranked 2nd on Oricon chart. I was really about that. Thank you again. I hope you to keep supporting me from now on.”
—-
Unfortunately, I didn’t have any chances to talk with him. But I was really happy to spend wonderful time throughout the event. I wanted to explain the happy moments of the show by writing in English, because I wanted to share my happiness with all of you. Thank you so much again. I hope you will enjoy my fan account. [END]