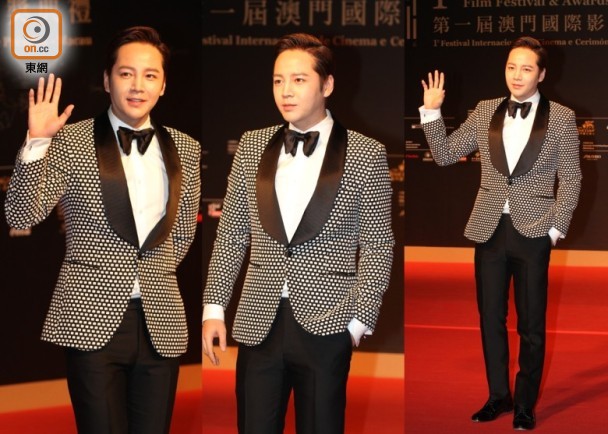 Finally managed to complete my long overdue FA of my Macau trip. It’s definitely one of those trip I hoped I could store the memories of it in my heart and mind forever, and wish it could be replayed like a DVD forever and ever….and thanks to Pei for creating the slow motion video 🙂
—
Another very last minute trip arranged, with a simple mind-set to see our prince walked down the red carpet as the ambassador for IFFAM (International Film Festival & Awards‧Macao) on 8 Dec. It was a pleasant surprise knowing his short film would be shown the next day on 9 Dec, and that he will be present to give a short talk about his short film! Tickets to the short film viewing were sold out swiftly as soon as the news was released and thankfully we managed to get tickets to it.

QQ and I took the only direct flight out from Singapore to Macau on 8 Dec morning. It was scheduled to arrive 1110hr, 10 minutes after JKS’s scheduled arrival time of 1100hr. We saw his departure pictures at Incheon while we were in the Singapore airport waiting for our flight to depart.

As soon as we touched down in Macau, we learnt that his flight arrived earlier than scheduled at 1053hr and we saw on SNS many of his arrival photos in the Macau airport. Since we had missed welcoming him at the airport, we waited unhurriedly for our checked-in bags, and slowly made our way to our hotel since we did not have anything else planned for the day until the evening.

QQ and I are very fortunate to have Casey arranged fully our logistics for us, which is how the both of us can literally fly over to Macau without any pre-planning at all. This is also how we ended up having lunch only at 2pm as we sat around, waiting to meet up with Casey, who was at work in the morning, since we had no plans. We learnt from Weibo that eels had started parking themselves in the waiting zone at the red carpet since morning, although the red carpet starts only 6pm that evening, and the opening ceremony for IFFM at 8pm.

Over lunch, we made an impromptu decision to get a bouquet of flowers to present to our Prince at the red carpet. We are not even sure if we would get a chance to pass to him, since we will probably not get a good spot at the red carpet waiting zone given we are already so late compared to other eels who had been waiting there since morning. 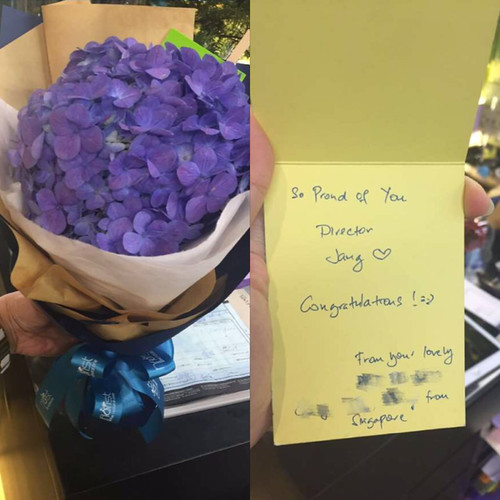 Nonetheless, we went to a nearby flower shop to get the bouquet and was pleasantly surprised to see his favourite hydrangea flowers in the flower shop! Without hesitation, all 3 of us pointed to that when we were asked which flowers we would like to pick.

We checked in to our hotel room at 4pm and went to the opening ceremony venue at 5pm. Not suprisingly, the audience zone was already fully packed with fans when we arrived. They went prepared with stools and ladders to stand on, and we tried to locate a good spot to stand. 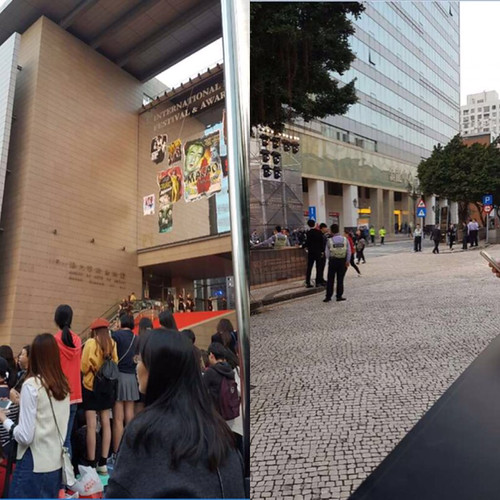 Managed to stand near a lamppost beside the road leading to the arrival zone. Casey and I went to get some snacks while QQ waited at the spot.

We got really lucky to bump into a friend of Casey’s who has 2 tickets to the opening ceremony and offered it to us!!! We were so thrilled as we were already prepared to stand with the crowd in the audience zone, and now we have the opportunity to enter the venue as guests to attend the opening ceremony!! We got really excited too and glad we stubbornly went ahead to get that bouquet of hydrangea flowers earlier. Maybe, maybe, we may get to hand it to him after all?!

Sadly, there were only 2 tickets but 3 of us, and QQ volunteered to stay in the audience zone with the rest of the fans as she self-proclaimed she will be too timid to face JKS up close and will chicken out passing the flowers to him.

Casey and I proceeded to enter the venue. As we handed the tickets to the usher, we were told we can enter the venue by walking the red carpet, or chose to go by the side via the elevator. We, of course chose the latter! LOL.

After we got up the elevator, we got to the “media zone” where all the media are gathered. This is also where the MC for red carpet would interview the stars, and thereafter they would sign their autograph on the banner behind. We were asked to keep moving and went into a hall where the cocktail reception is held.

Many stars started flowing into the hall area. 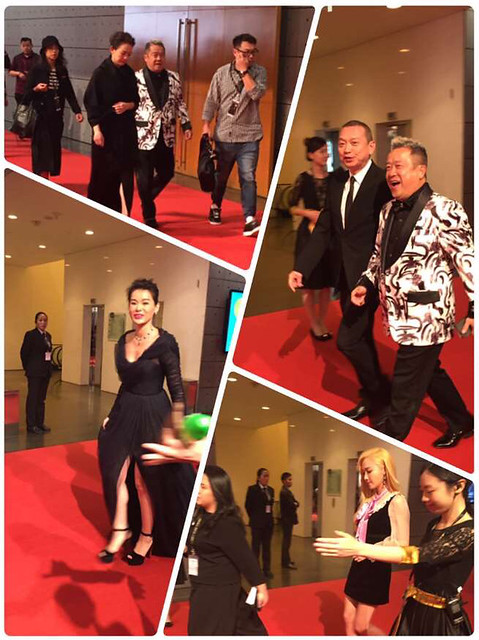 At about 745pm, we heard loud screaming from the arrival zone of the red carpet!! Asia Prince must have arrived!!

Shortly we saw him appearing at the media zone!!! At that moment, it felt like everyone’s attention turned towards him. We could see the spot light shining on him and shutters from the cameras kept flicking away. Although we were still a little distance away from him, we could spot him easily as he shines like a bright star!!!

When he was done at the media zone, he was welcomed by the President of IFFM Organizing Committee at the entrance of the hall.

The next few seconds, a memory I hoped to capture always in my heart and mind, happened way too fast!!! As soon as he entered the hall, he spotted eels who were lined up on his left. He turned to acknowledge and did a “chu”. 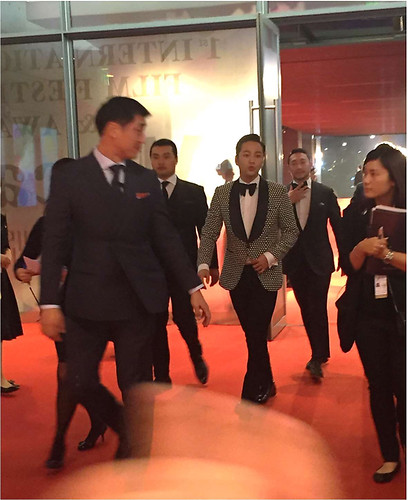 During those split seconds, I had to decide if I continue standing where I am and try to hold out the flowers, or step out to pass it to him. I actually did not realise I did actually step out and held out the flowers without saying a single word!!! I probably had the “please-take-the-flowers-else-I-will-be-so-embarrassed” look, and thankfully, he did reach out his hand to receive the flowers from me….and he flashed the most stunning smile, looked at me in the eyes, and said “THANK YOU”. The below video (credit @jksTaiwan) captures that precious moment.
*Link to video: https://www.facebook.com/JKSTAIWAN/videos/1710040095976164/
*Slow motion of the moment 🙂 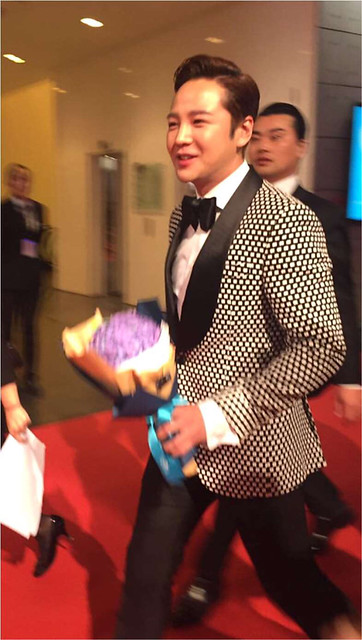 Casey and I joined the cocktail reception. There was a section cordoned off for VIPs which we are not able to enter. Shortly JKS came out as the opening ceremony is starting soon. We managed to follow him into the hall. 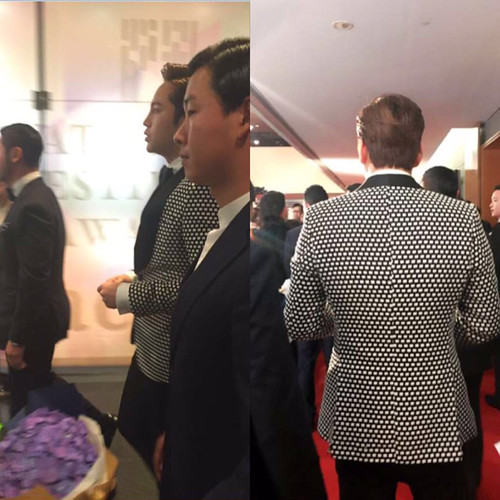 Here are some photos and videos we took during the opening ceremony. 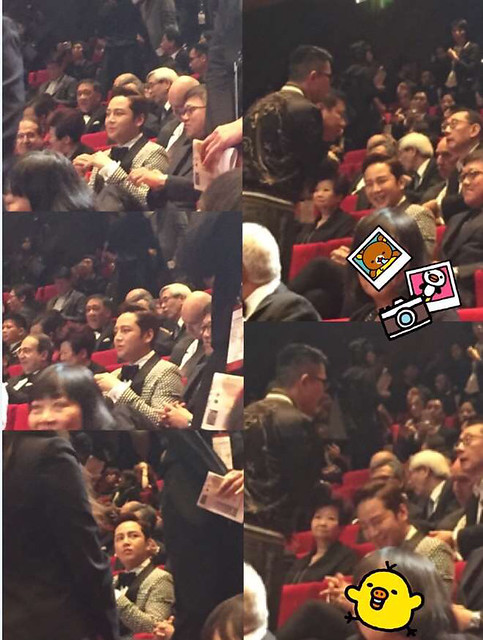 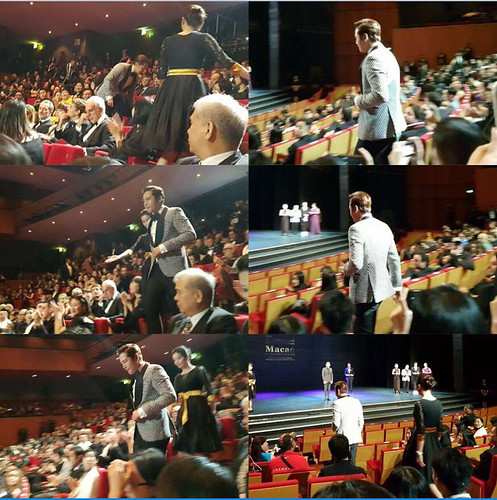 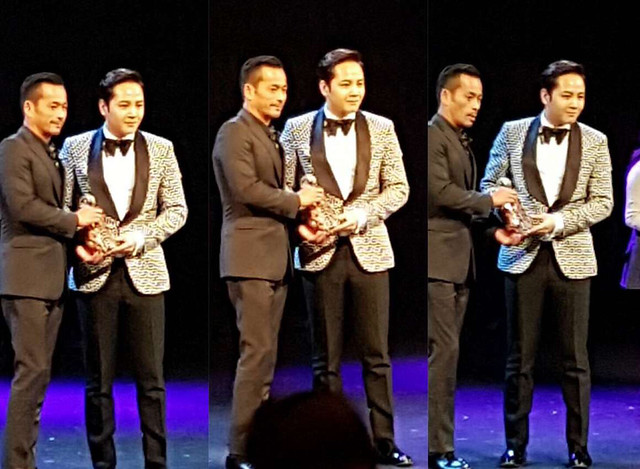 The next day, we decided to become tourists and did a little tour of Macau. Many eels had been queuing at the Macau Tower to get good seats for the film viewing (in fact there had been various announcements to queue since last night), but 3 of us decided we are fine sitting anywhere during the film viewing session, so we didn’t bother about getting there early to queue. 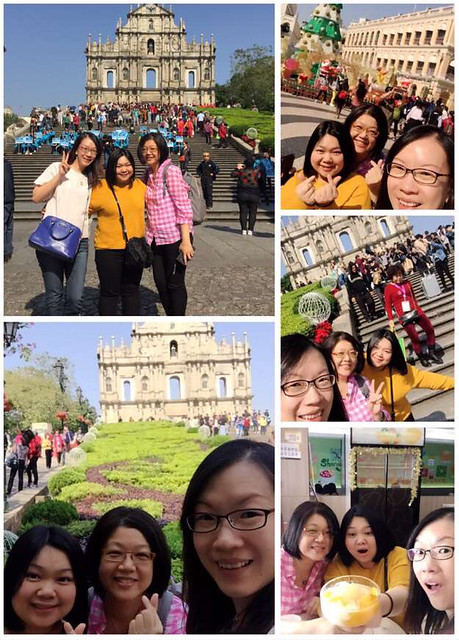 After sightseeing, before heading to the venue of the short film viewing, we decided to head back to last night’s opening ceremony venue to look at the banner he autographed. To our pleasant surprise, we spotted familiar faces and decided to hang around a bit.
And, we saw him!!! 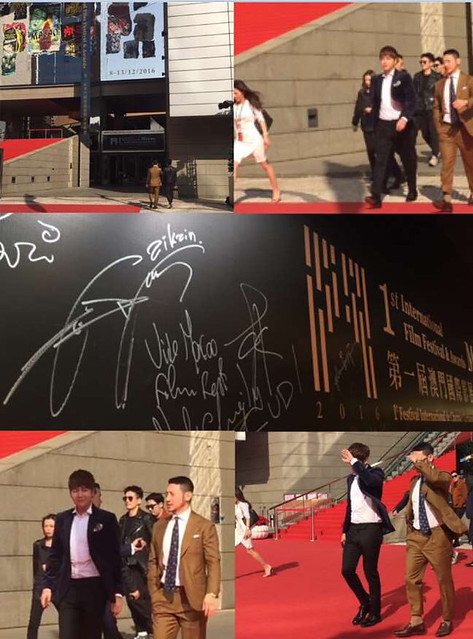 Walking out from the venue, in dark coloured tuxedo, looking so good!!! There was just us and another group of eels there when he walked out. He looked at us, nodded, and smiled at us as he walked past us 🙂

We then proceeded to Macau Tower, venue of the short film viewing. We were probably one of the last few to enter the hall, but we still managed to get pretty good seats (facing the centre of the stage). 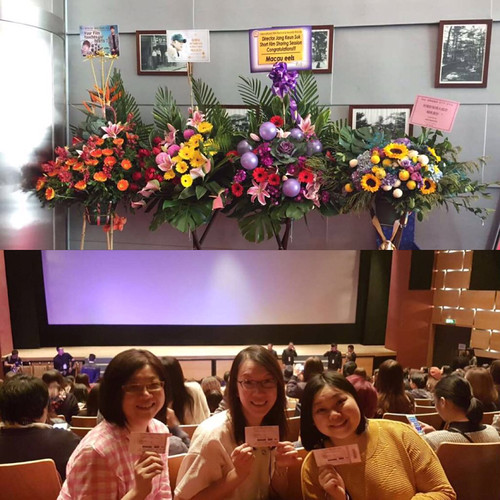 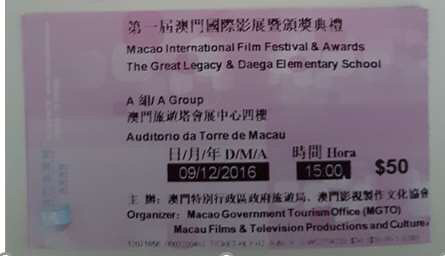 As he enters the hall: https://youtu.be/wEpPBWdYvR4
Q & A session with JKS: http://jangkeunsukforever.com/archives/46979

After dinner, we made our way to the airport as JKS was scheduled to fly out on the 1am flight on 10Dec. None of us took any videos/pictures at the airport but there were many that had been shared.

And thanks to Eve for her beautiful gift – drawing of JKS holding the bouquet of hydrangea flowers, the most precious moment of this trip! 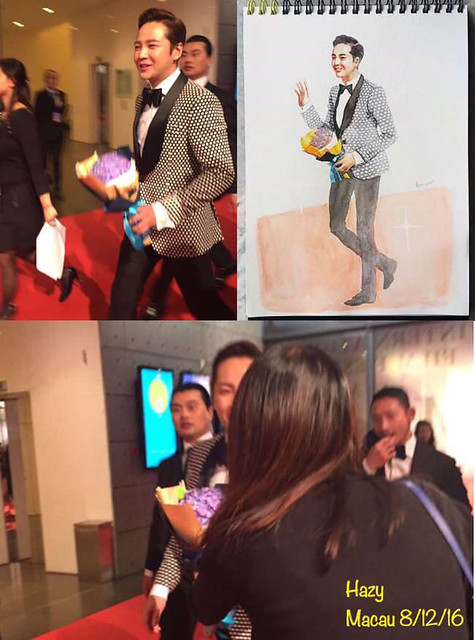