“If you only learn and do not think, you will fall into ruin. If you only think without learning, it is dangerous *1”

Dae-Gil has a hideout in his heart that wouldn’t talk about it, he wants to protect Jeosan and his younger brother at the same time and he also wants to keep his promise to his mother. Honestly I can’t understand why Yeoning wouldn’t trust Dae-Gil! Dae-Gil just wants his brother and his friend. no any other purposes! So many times he proved his loyalty but still…

Dae-Gil wants to help Yeoning and be on his side but Yeoning just can’t think about anything but being the one who wants people to worship him!! tears in Dae-Gil’s eyes were really heartbreaking when Yeoning pushed him away, but to have such a brother who leaves you behind so easily… is more heartbreaking…
—
Well, it wasn’t hard to predict YIJ is not going to die! Dae-Gil wants him dead so badly 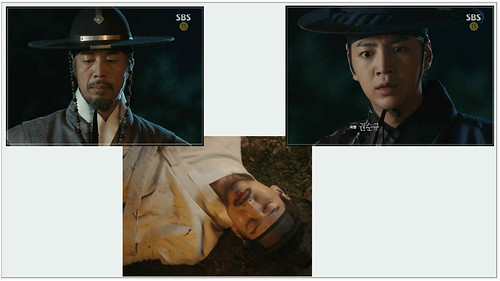 The last scene of 2 brothers “the king and yeoning” was so moving… the king knew that Yeoning would kill him, he still wanted to think the other way and trust his brother for the last time! He even apologized for what he had done to Yeoning and in the other hand he was ready to give up his life now, so he did risk it and ate his favorite meal made by his brother! Yeoning. 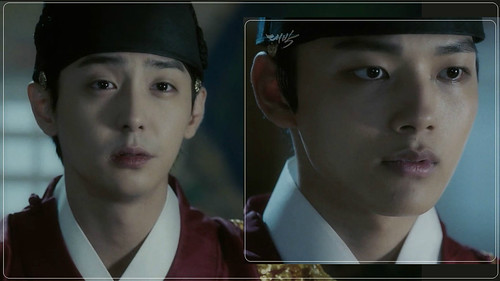 I think Kim Hyun Woo acted the helpless king who gave up his dreams in a way that everyone would forget all about his bad deeds and think about Yeoning as the cruel one! Yeoning waivered a little but it was too late. He made his decision before stepping in the kings room. After all Yeoning killed the king unintentionally on purpose! The seeds of hatred that would grow in queen Seonui’s heart will cause Yeoning some trouble sometime. 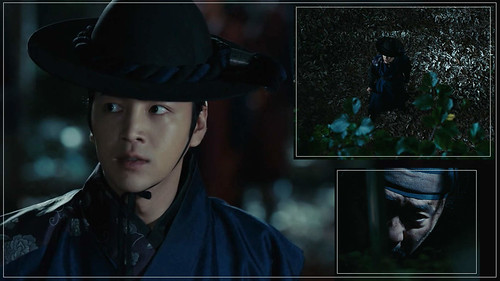 Dae-Gil could even hear YIJ’s breathing! He found him! His next move would kill YIJ, but king’s death has saved YIJ’s life. As Dae-Gil emphasized YIJ doesn’t have his pride anymore.

But he has his life to go for his inauspicious plot again in the future. He needs some time to take back his pride. 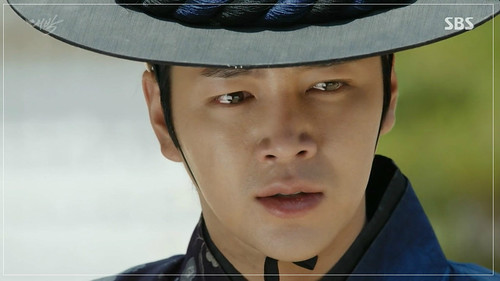 For a second Dae-Gil had this feeling like Yeoning had killed the king but because he trusts Yeoning he wants to hear from his mouth.

The only family and friend that Yeoning has right now is Dae-Gil. 2 brothers should get each other’s back now, but Yeoning is pushing him away, he wants to reach the throne no matter what. 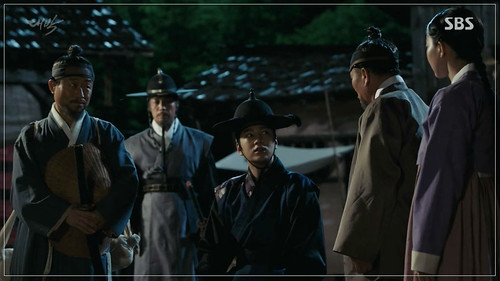 Well he doesn’t have any other purpose to stay around. He has his dad and all these people around, none of them are connected with him by blood but his fate changed their life too. They all live for a good purpose now, he can have his little kingdom and leave there to live with his own people, at least he doesn’t need a permission to help them! Finally Man Geom showed up, the memorable reunion of their little family! And JKS’s brand new smile, I mean Dae-Gill! 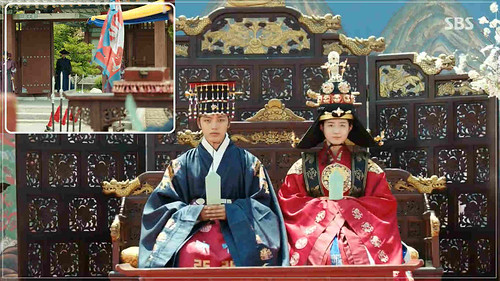 Now it’s time for Yeoning to have what he always wanted, being the king! A vulnerable one who doesn’t have anyone to trust.

Dae-Gil came to visit his brother for the last time before leaving … he still loves his brother, but from now on they’re going to head down different paths and live far from each other …

Yeoning won’t let out why exactly he wants Dae-Gil away! He pushed him away but he still wanna know about him! He’s afraid of losing him? Or losing to him?!!

As the king, he is revenging, wiping all the opponents away, this is the end of Soron faction.

YIJ is using king’s weak points to deceive people again, ”first: the king poisoned the late king, and second: the king is not of royal blood”.

After Years the rebellion is going to start. Moo Myung who saved YIJ is still alive at jail. YIJ has saved Rebel Jeong, he has his army of 100. YIJ, rebel Jeong and Park Pil Hyun will start to gather people of 8 cities promising them to return their lands taken by dynasty kingdom.

DG wearing beard!!! Who has a king inside of him that care about people 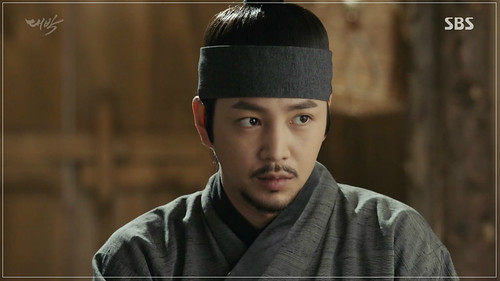 Everywhere that YIJ steps on, many blood will be shed and it’s just Dae-Gil who can make him stop.

After a long time the 2 brothers meet.

Yeoning is acting callous, he doesn’t even let his son knows that he has an uncle! So cruel! 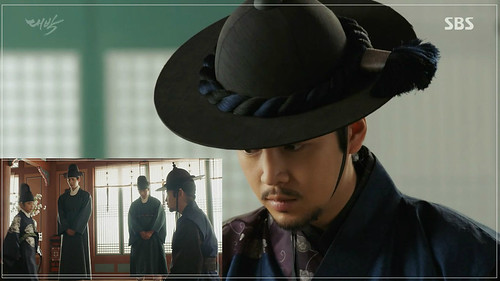 When Dae-Gil is looking at his nephew, he’s eyes are smiling, JKS loves little boys, he was going to be a great uncle if Yeoning let him, just my imaginations LOL

Dae-Gil has a better understanding about people’s conditions. He wants to let the king know what’s the reason but the fear of losing the throne won’t let Yeoning to open his eyes and see the truth, to know that all that his people want is a piece of land to farm and stay alive. 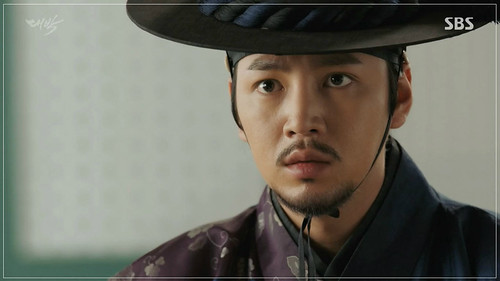 Still all he sees is that Dae-Gil is here not to receive his royal command but to reproach him!!!!

He did pushed Dae-Gil just after the coronation but to keep his position he summoned Dae-Gil and offered him a government post and military soldiers (he’s being so rude!) He believes that Dae-Gil knows YIJ the best and he’s the only one who can stop him. But Dae-Gil wants no more bloodshed and he didn’t accept this offer. So Yeoning gave Dae-Gil 5 days to fix things in his own way.

No need for weapons, DG’s noble nature will fix things

YIJ’s goal is to make Mill Poong Goon (the grandson of crown prince Sohyeon) dethrone the king and sit on the throne himself and make a new government. He sent a letter to Soron faction asking them to join him, Soron’s answer was: If Queen Dowager is in YIJ’s side Soron faction will side themselves with him as well, and if not they will oppose him.

YIJ deceived people of 8 cities by promising them to return their lands in order to install Mill Poong Goon as the new king, he also has Queen Dowager by his side, following by that finally Mill Poong Goon accepted to join the rebellion. 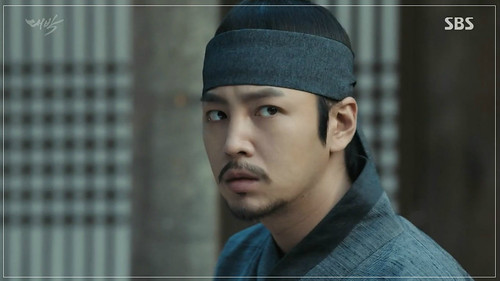 Dae-Gil is assigning tasks, KCG seems to be satisfied with what he’s been entrusted but he’s angry that Dae-Gil is making orders, Dae-Gil is too cute to be scary!!

Dae-Gil uses Hong Mae to get medicine but his intention is to let her know she should use her mouth in a useful way!!

YIJ and his men programmed to reach the capital in 10 days, king offered Dae-Gil 5 days and Dae-Gil decided to stop YIJ in 3 days
Yeoning trusts Dae-Gil but as the king who sits on the throne he can’t trust him, he said.

The special military is on standby outside the city.

Hong Mae is spreading out rumors about YIJ in Hanyang.

Dae-Gil will head to Mokcheon which is not an strategically important city, he must have read YIJ’s thoughts again. 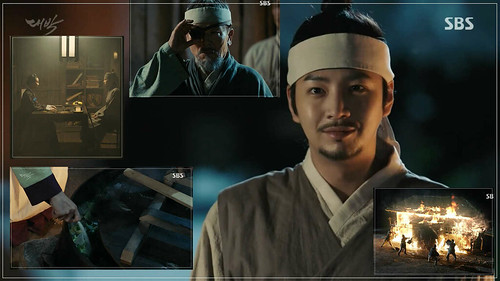 And YIJ gathered a group very quickly so they don’t know one another well, Dae-Gil’s tactic is to use this against them.

This way they have to seize the storehouse, and set it on fire.

Sol Im has to pour the drug in their stew.

Mokcheon has joined YIJ in the very last moment, they unpacked to rest there and feed horses!

And Dae-Gil gets rid of their horses!! Smart move! He really read YIJ’s thoughts.

By the royal command of the king soldiers have permission to slaughter YIJ and his men!

And finally!! Dae-Gil and YIJ meet each other. 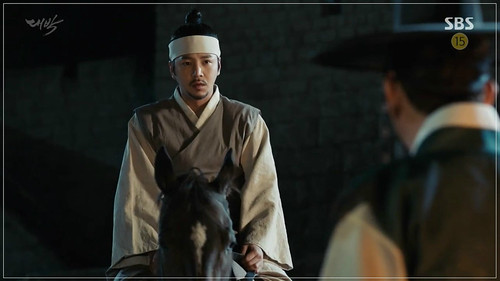 —
Sweet thing about precocious moments is that their sweetness can last long in your mind! Well he created a new character to live in viewers’ mind long after the drama finishes, and it’s so precious to see the various aspects of his different roles, he even concentrates on details, things that other actor or actresses don’t even notice! One must focus 100 % on every part of his/her body, face and feelings to pose for a photo, let alone acting this kind of scenes in front of the camera!

I can easily realize that he thinks and rethinks and overthinks about how to act in every scene.

He showed us lots of his new acting skills in the drama “The royal gambler”, everyone says they believe in his acting skills by now. Also this time he’s working with a team of good actors and actresses in his own generation and also his seniors are great actors. This give me a peace of mind while watching, I don’t have to worry about others messing up while he’s trying hard!

Being a girl, following the romantic line in the drama is something I absolutely wanna see but it’s somehow unbelievable that I’m still curious about the rest while I know the love story is done! Also I was always bored to see action scenes in the movies but now I’m thrilled by what JKS is doing!! He’s letting out his manly character through them! Nice job.

The special thing about the “The royal gambler” for me is that it was the first JKS’s drama I’m watching when it’s on air I’m happy this special one was my first! So Dae-gil and all these days of happiness and excitement will remain in my memories. So precious. [END]
—
*1: Crown prince Hyojang the son of king Yeoning read these words from his textbook.

1 thought on “Thoughts on ‘Daebak (The Royal Gambler)’ Episode 22”