The episode 16th………… 2/3 of the drama have aired. Only left 1/3 of it for us to watch the superb, handsome, heroic prince Yeongsoo (Dae Gil/ JKS). For me, it is a mixed feeling to watch this episode as I’m eagerly want to know how Dae Gil confront to his biology parent after he knew the truth of his birth, but on the other hand, I wish the drama would go a little bit slower as I’m still not get enough of him in the small screen !!! (I am sure all of you know who I mean ^0^…… I am a typical fangirl thought *v*)

Ok, enough with my fancy thought, let us recap what have shown in the episode 16th. This episode started with Yi In Jwa revealed the secret of Dae Gil’s birth. As expected, Dae Gil was shocked, unbelieved, confused (JKS carried out the inner feeling of Dae Gil so well)…….. and follow the best scene in this episode 16th is when Dae Gil first encounter with Lady Choi after he get to know she is his real biological mother. Dae Gil’s expression, his intonation, the movement of his eyes !!! JKS acting skill is really really really superb!!! (for me this is the best scene in whole 16 episodes and I rewatch this 3min scene for sooo many times till I lost count >o< ). Even he has only 2 lines in this 3min, but I can fully understand his hesitation, his doubt, his pain, and his urge toward the mother’s love…… TT 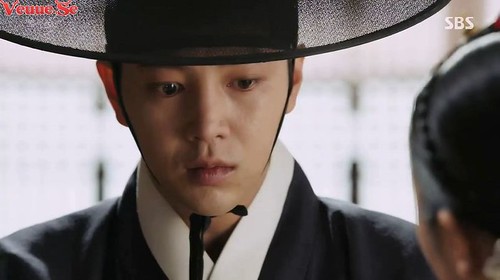 Of course, when Dae Gil facing the King Sukjong, his real biology father…. the expression seems to be more controversy as he still takes it as “personal is personal, official task is official task” and the King is his “BOSS” right now, not the father even he did hope that he can catch some “fatherly love expression” from King Sukjong. 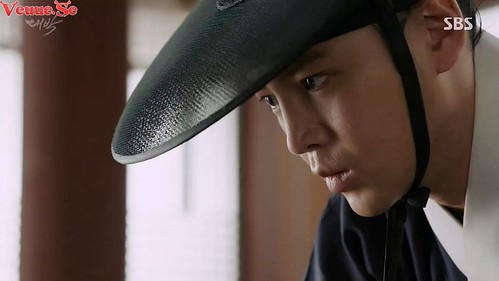 From the meet up section between King Sukjong, Dae Gil and Yeoning, Dae Gil accepted his 2nd assignment — to catch Yi In Jwa and rebel Jeong. Thus they set up the trick and they did manage to catch the evil (Yi In Jwa) and the gang but not rebel Jeong. 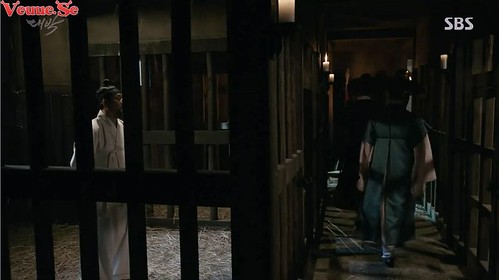 Meanwhile, King Sukjong called back Kim Chae Gun (the master) to assist in this assignment and Dae Gil later confirmed with him that he aware of his real identity but the Master console him that he will become who he is today regardless his identity……. That I believe Dae Gil was ease and comforted by his master after long struggle to accept his new identity. 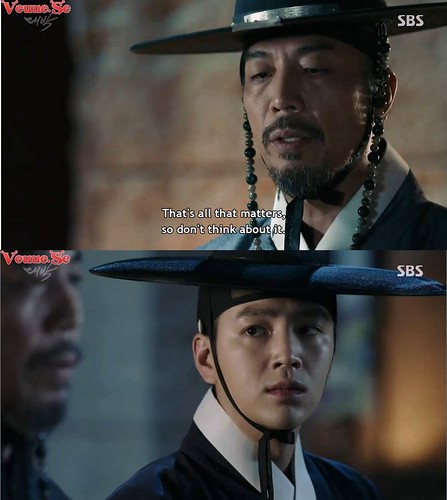 Dam Seo appeared in this episode for few minute only to convey the message that she have become a killer who will kill all the evil guys and including her former master Yi In Jwa. By then, she urged Yeoning stop loving her and arrest her when the time come. 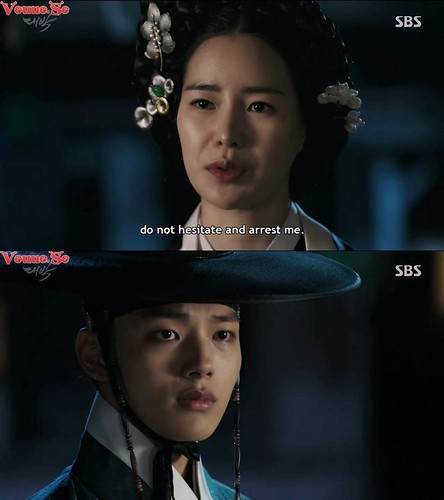 Besides Dam Seo, other 2 ladies were soo close to our Dae Gil and showing their interest toward him. Seol Im finally felt relieved as Dokkebi (Dae Gil’s grand pa) told her that her physiognomy was not as bad as Shaman Hwang (the fortuneteller) said and she will not bring any harm to the people that she love (well, I am sure everyone knows whom she love ^v^). And Yeon Hwa showed her intention very clear by stated that Dae Gil will see her very often in his house from now on. (for me, this part is the only section that was slightly “lighter” in this episode 16th. Seol Im shown her jealousy, and Yeon Hwa tried to gain Dae Gil attention……. just like what the eels do !! hahahah…. ) 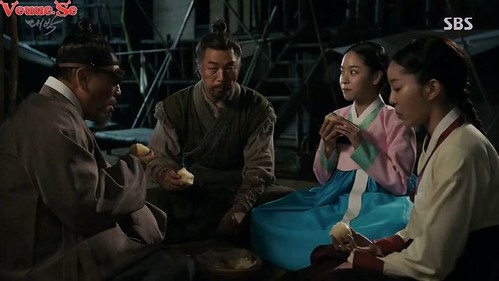 Now the scary and fierce King Sukjong, initially prince Yeoning asked why only now the King decided to take down Yi In Jwa whereby he (King Sukjong) is not even taking any action toward the assassination that planed by him (Yi In Jwa). The King clarify that, it is because Yi In Jwa has growth much stronger now and he has intention to merge with rebel Jeong. (well, my point of view is because Yi In Jwa has framed Dae Gil and put him in jail which trigger the anger of the King as a father…… I might be wrong thought, but I do wish it is the way ^^).
So, this is why in the trial of Yi In Jwa and the gang, the King was so mad and autocratically want to execute Yi In Jwa even the evil has defended himself from all the crimes Yeaning stated and the prince Yeoning unable to convince the judge on what Yi In Jwa did.
This is the first time I saw the King lost his temper and control………. for me, if not because of the love of a father, is what then…..??? 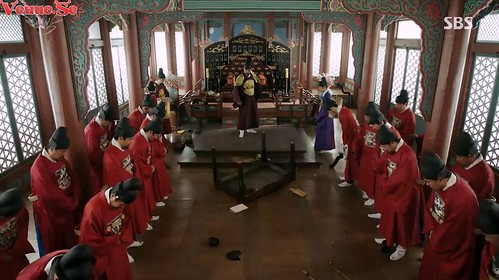 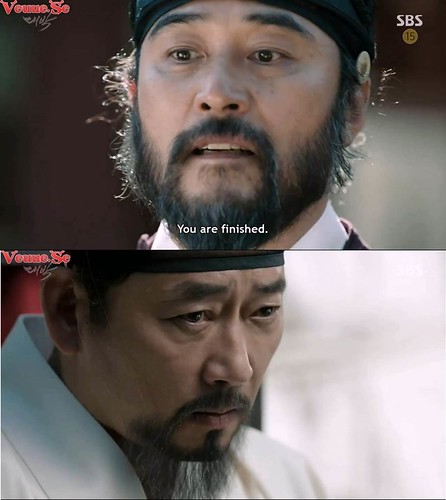 Come to our evil Yi In Jwa now, he is so calm after arrested and put into the jail. Initially he was still so confident that everyone will still support him until he has turned down by all his “friend and supporter”. And I can see he has shaken a bit and started to show some worry, uncertainty……
At last, he show us his hidden card in order to save himself.
By the way, I have wondered from the beginning what is his hidden card and without fail, he really surprised everybody when he said “Baek Man Geum is still alive” !!!!!!! OMG, Dae Gil’s beloved father still alive (@@), OMG, OMG, OMG…….. what will Dae Gil do and react to it ??!!! AAHhhhhhh…………. Ok Tok Gae!!!!

So, in order to testify Yi In Jwa’s words, Dae Gil went to the grave and dig out the coffin. With this, the episode 16th ended. 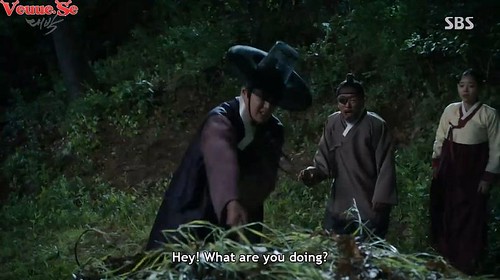 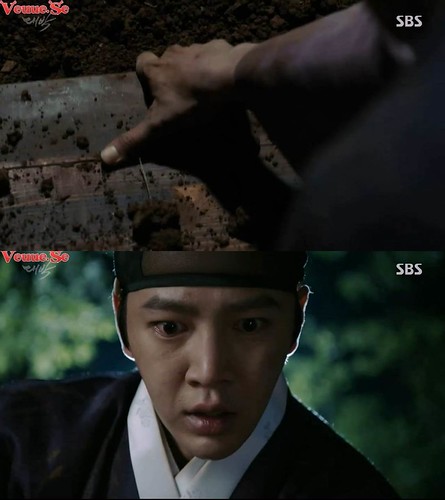 —
Additional thought:
The ending scene of episode 16th really increased the curiosity of the viewer on what will happen in next episode, and of course all the eels even eagerly screaming and shouting the moment this episode ended………. okok,there might be me only ^^ hahahah……
In addition, there is only one character that I am still awaiting how it will be developed further or what will happen to her— “Dam Seo”. I am expecting the script writer give me a “Wow” surprise as he did well for all others characters: clearly define, compact, intense and link well to each others in the drama. I am sure he plans something for our first lady lead since the 2nd and 3rd lady lead have carried their character so well.
And last but not least, thank you for your patient to read my recap and thought, hope you all will forgive my fangirling reaction ^o^. And thank you Tenshi for giving me the chance to share, kiss, kiss, kiss!!! [END]

10 thoughts on “Thoughts on ‘Daebak (The Royal Gambler)’ Episode 16”