This episode starts to show how Daegil’s objective of cutting off the support system of Yi In Jwa come to fruition by taking over all his gambling dens which includes his three biggest allies (Six Ghost, Gol Sa, Cutter) that generate the largest income for him used to fund the palace ministers whose support he needs for his grand plan. At the same time, we see here the re-emergence of Seol Im, out to get revenge for the death of her parents against Yuk Gwi Sin (Six Ghost) who is Daegil’s first target in a gambling fight betting his life if he loses and if he wins, the ownership of the den, the slave contracts and Six Ghost’s life, he feels confident, since he has always been gambling with the dvhardware games. Yi In Jwa would not miss this occasion and even puts a large amount betting instead on Daegil to win.

“I am the luckiest MAN!” Indeed very apt statement of Baek Daegil which fact he immediately establishes to Six Ghost, his opponent, who he effortlessly beats in his own gambling specialty. Daegil evidently missed the fact that a broken dice, his first strategy to win the game, would cause the opponent to roll another dice but his forward thinking saved him. He knew the dice from the den are used for cheating thus he ingeniously manipulated the dice used in the crucial part of the game to be the one that he earlier gave a child to bring and provide when it was needed. 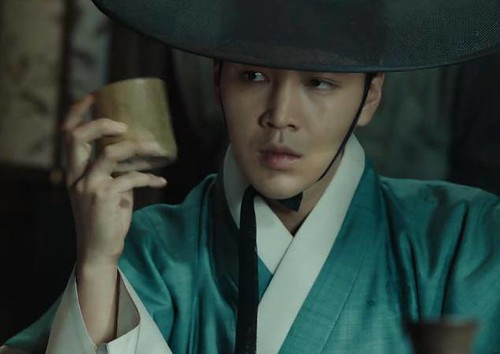 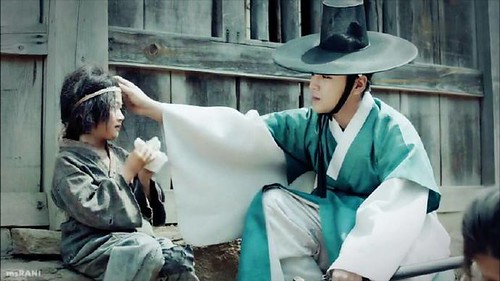 From the start of this series, this fact of Daegil being born with endless luck has been imprinted in each episode so far. Always armed with much confidence and conviction, Daegil acts out his thoughts swiftly without much consideration that he always ends up in the most unfathomable dangerous situations but everytime manages to come out above each of these. His great luck also extends to people around him as he is able to lead to freedom the common people from their very prohibitive contracts that bondaged them for life to their financiers.

After defeating Six Ghost, there is much to look forward to see in the next episode what different tactics in gambling will Daegil manage to use when he challenges Gol Sa, his next target. 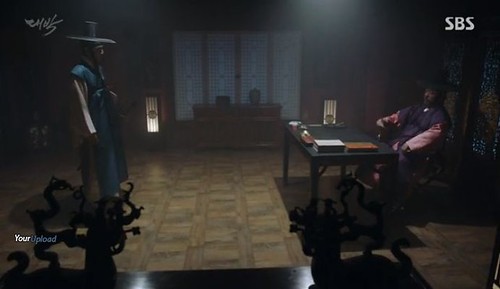 A new female character is introduced in this episode, Gol Sa’s daughter, described as stubborn and troublemaker currently under close watch by Yi In Jwa. From this very important information shared by Seoul Im, Daegil and Yeoning both came to the conclusion that Gol Sa’s daughter is the only reason for the business connection between Gol Sa and Yi In Jwa and to break this would be to take the daughter from Yi In Jwa. They then set out for this mission. After Daegil almost being caught by Yi In Jwa’s Fortuneteller in the room of Gol Sa”s daughter, Gol Sa’s daughter’s unwillingness to leave the place with Daegil would cause her later to be anxious on Daegil’s words that her father would die in his hands just as Six Ghost’s fate. We will have to wait for next episode to see what she will eventually end up doing just to save her father. 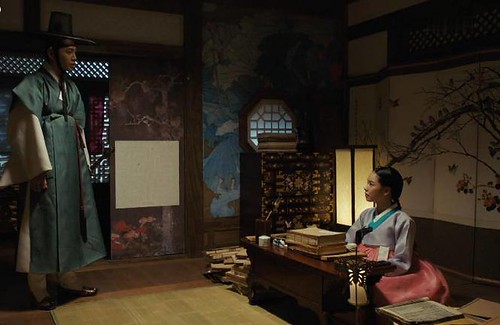 I wonder if there is a more important role that Gol Sa’s daughter will play in this series other than being the link between Gol Sa and Yi In Jwa. She imbibes the aura of strength and deep knowledge, as Daegil said, she seems above average being able to distinguish people from their footsteps. She is pretty too. 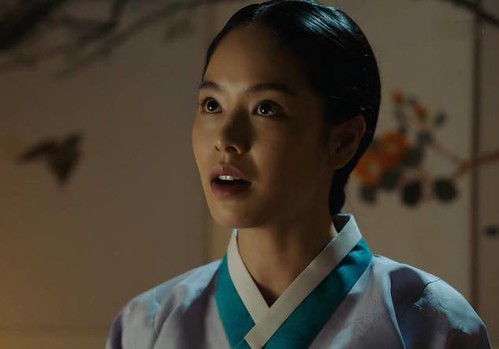 It may be worth taking note on the reading of the Fortuneteller on Seol Im’s physiognomy that she has an unfortunate fate of causing horrible death to people around her. Worth looking forward to in the next episode what the spiritist advised as a way to avoid her unfortunate fate. I hope she will not in any way put Daegil’s life in danger. Will we see Seol Im’s character take on an increased role to help Daegil in his fight against Yi In Jwa in the next episodes? Noticeable is the scene where Daegil looked at Seol Im with so much concern as if he knew the face reading made on her. 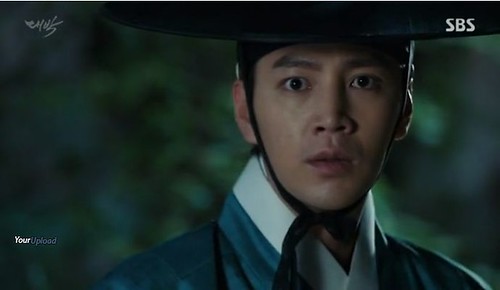 On the other hand, Yeoning, who has the same goal as Daegil of subduing the power and influence of Yi In Jwa, after being made more aware by Dam Seo (episode 8) of the inequity of sanctions imposed on light offenses to the common people and with his knowledge of officers and ministers who have caused hunger and death to the common people by receiving bribe money from merchants, he shook the balance in the palace by proposing to the King drastic changes on lightening penalties for small offenses by the common people, fairness on treatment between common people and the established ones as well as abolishment of established merchant monopoly on trade and commerce. Yin In Jwa is most affected since he benefits most on the trade monopoly. He carefully plans how to kill Yeoning’s proposals thus warning Yeoning in this episode to always look before leaping (strategize well before and while attacking). What Yeoning evidently lacks is to consider and prepare counterattacks to his opponent’s possible retaliations. Thus, in this episode, due to Yi In Jwa’s maneuverings, Yeoning is displaced from his position as Inspector General for reasons of the recent changes he proposed, for kneeling down before the common people and apologizing to them in behalf of the King and the Crown Prince for not being able to provide for their livelihood. It is not certain if one of the Ministers (Kim Chang Jib) is on Yeoning’s side but he actualy advised Yeoning to always be careful and cautious of his actions especially with so many people monitoring what he does, not to be discouraged but stand firm and at this time seek for the King’s advice. 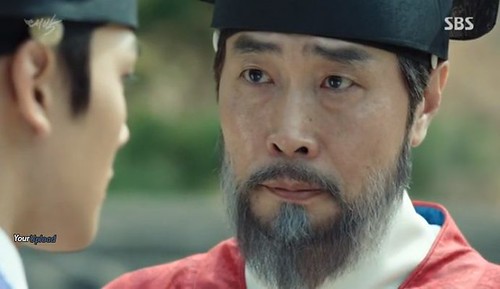 The wisdom of the King was so direct to the point reminding Yeoning, that even without his Inspector General position, he has the power to control the people’s sentiment and how to move people’s behavior towards him instead of him being swayed by them. He needed to wield a strong backbone, be confident and firm in his convictions adding the fact that he has in inherent power being the Son of the King. And this leads him to a resolution to seek Daegil. 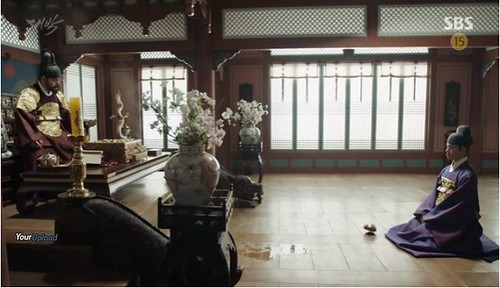 Seen here is Yeoning’s recognition that he and Daegil had common goals that are related to Yi In Jwa’s activities thus he initiates to build a cooperation with Daegil even though they may have completely different methods. It looks cute how these two interact in their scenes. Yeoning yielding to Daegil like a younger brother to an older brother. Yeoning was continuously complaining to Daegil about how informally Daegil was always addressing him despite being a prince. It would be a scene to see how these two will react when they will come to know that they are actually real brothers. 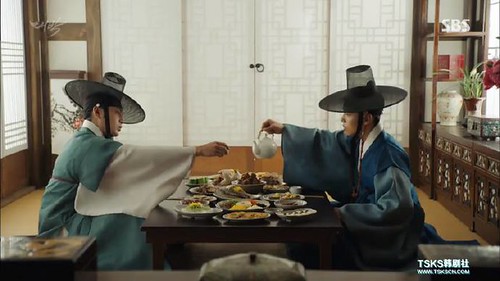 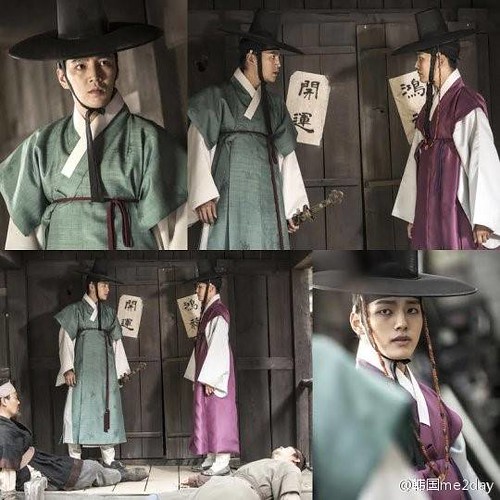 Check how they had the same idea of wearing Yi In Jwa’s mask to fake his identity and get the results that they wanted. Brothers, right! 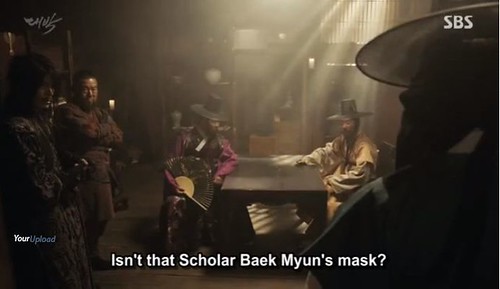 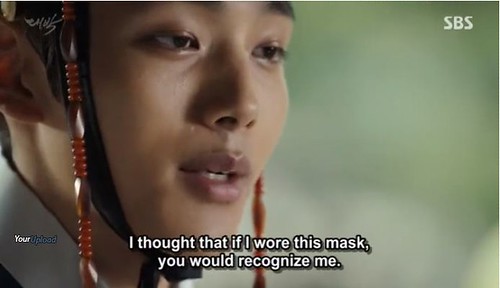 There were light moments in this episode which balanced the more serious scenes. Grandpa continuously teasing Daegil with Seol Im. It seemed that Daegil was concerned of Seol Im more like a friend or sister. During discussions, there were times that Seol Im got frustrated for being bypassed on her inputs but good for her she asserted herself well on the information pertaining to Gol Sa’s daughter. It was funny when Seol Im was joking Yeoning acting like a prince only to be informed by Daegil he is really a prince. She had to be punished by raising her arms for sometime. Seol Im’s facial expressions, reactions and her liveliness in the scenes at Daegil’s place brings out in Grandpa, Yeoning and Daegil relaxed faces and lighheartedness from the usual tense and serious looks in most of the scenes here and in other episodes. 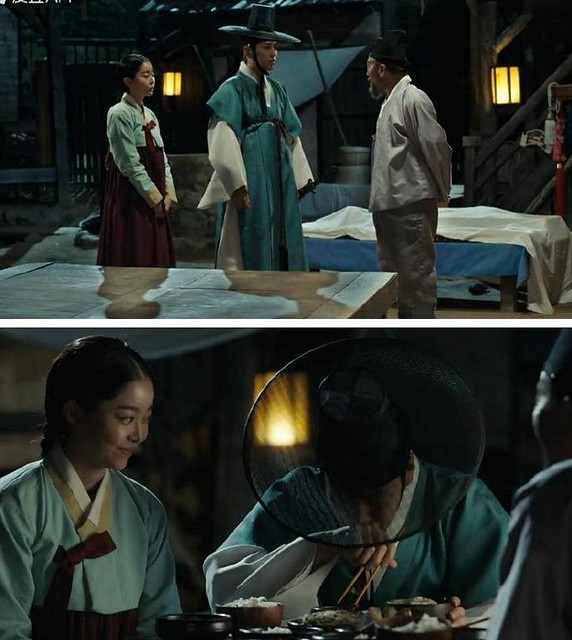 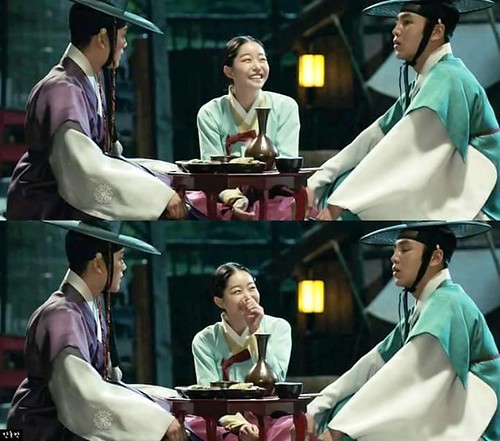 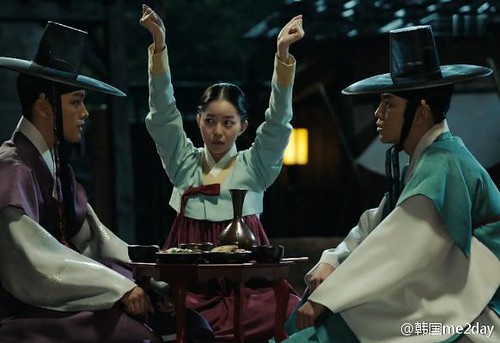 Not to forget that Damseo showed in this episode only for a few seconds after her last appearance in episode 10. With the awareness that Yi In Jwa was the one who killed her father, she is most likely to join forces with Yeoning and Daegil now that she has decided to go separate her path from Yin In Jwa. Would she still maintain her goal to go after the King’s life despite hearing the truth of her father’s death? Puzzling too is the fact that she avoided meeting Yeoning and Daegil when it was clear that both knew it was her who shot the arrow at Six Ghost? Or, is it that Damseo is still thinking how to deal with each guy knowing what she knows about her father and about both Yeoning’s and Daegil’s feelings towards her? 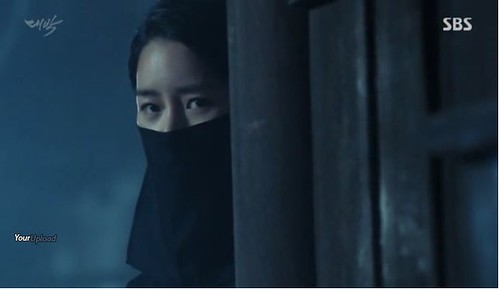 There are questions to be answered, thus the next episodes are highly anticipated to find out how these characters would further develop and interrelate as the story unfolds. Would be interesting to see how will Daegil and Yeoning progress and manage in their plans to purge Yi In Jwa’s power and influence with the latter’s clever tactics. [END]

4 thoughts on “Thoughts on ‘Daebak (The Royal Gambler)’ Episode 12”