Plenty seems to be happening in the Royal Court in Episode 9.

First, a new political player, Kim Chang Jib, was introduced at the beginning of Episode 9, a player who seems to be a power to reckon with (he looks even scarier than Lee In Jwa to me!) 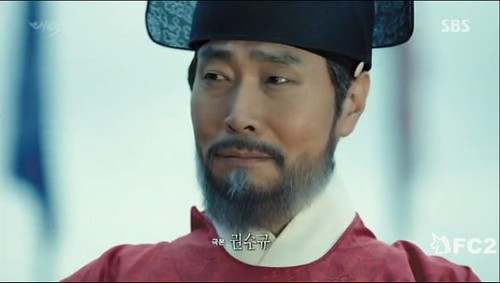 At this critical time, the Court discovered that the Crown Prince was not exactly in the pink of health (coughing out blood has never been a good sign – especially for someone who’s suppose to be the next King!)

At the same time (after blindly trusting a stranger who walked into his chambers out-of-the blue years ago) the Crown Prince starts to question Lee In Jwa’s loyalty and true intentions (what took him so long?!). Aware of Lee’s political and financial clot, he finally suspects Lee’s ulterior motives.

Crown Prince coughed out blood once again – this time in front of his “trusted guardian” – leaving Lee in an uncomfortable realization that his to-be-puppet-king may not be quite up to the role Lee had been grooming him for. (it’s good to see that nasty weasel Lee shaken for once – leave our handsome Daegil alone and stop adding bruises and holes into him!) 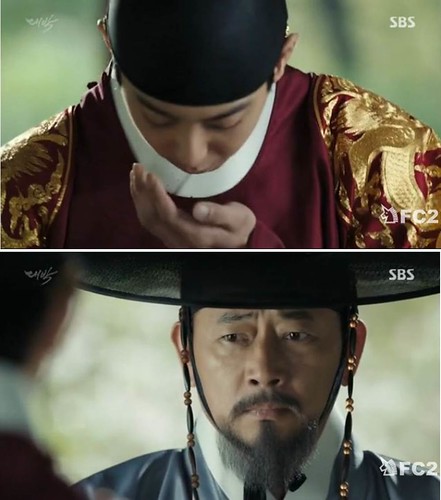 And the Assassin’s date with the King is fast approaching…….

Handsome Daegil is torn between loyalty to his Master and his King. He decides to stop his Master from committing treason and at the same time save his life. (Isn’t he just so cute, heroic… and totally gullible?) With the Palace’s map in hand (how did he know the map was hidden there??) he rushes down the mountain after his Master. 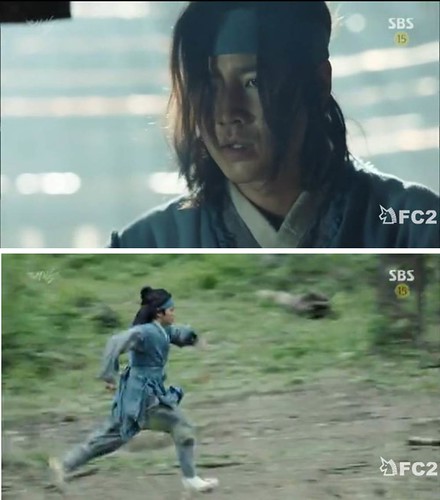 Meanwhile, Lee In Jwa sends Dam Seo to do what she has been training and waiting for her whole life – to take advantage of the mayhem and confusion of the assassination and kill the King herself (when she doesn’t let the assassin do the job for her is puzzling for me).

The Royal Guards, under the command of Prince Yeoning prepares to protect the King from the Assassin by preventing anyone from entering the Palace.

Prince Yeoning has the nagging suspicion who the Assassin might be…

Kim Chang Jib has a nagging suspicion who the King is really favoring as his successor….

Handsome Daegil got caught (several times) trying to sneak into the Palace, but the (super incompetent) Royal Guards never actually got to catch him. 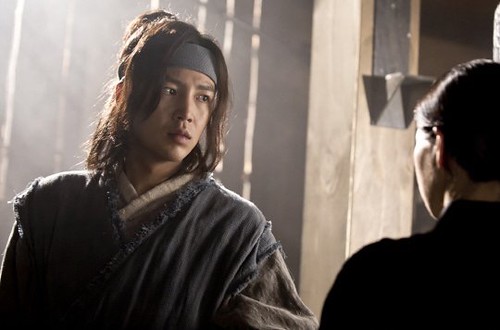 Prince Yeoning bumps into Dam Seo (the Palace is that small that everyone bumps into everyone?) but lets her off so that she could avoid the guards.

Finally everyone makes it to where the King was calmly impatiently (he was drumming his fingers kkkkkk) waiting for the Assassins. 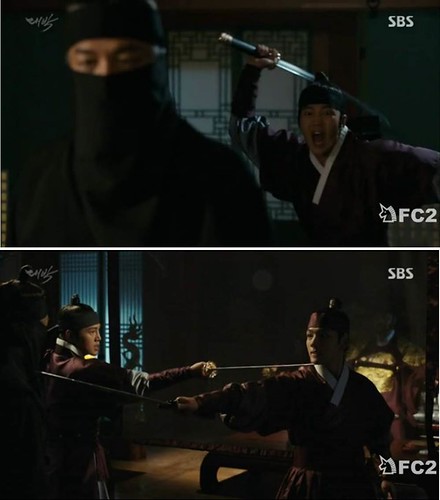 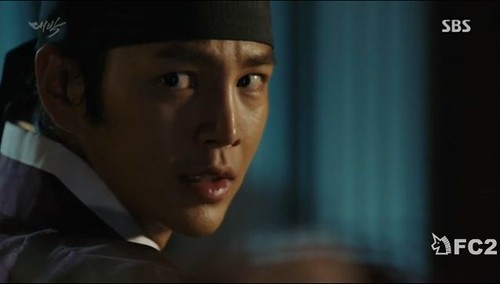 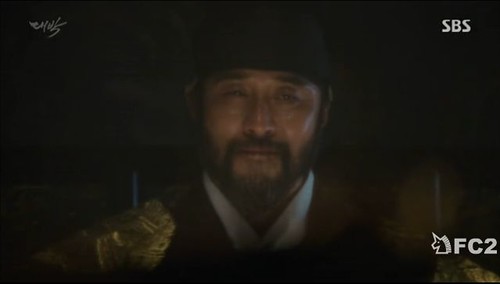 As Lee Yi Jwa guessed, the assassination attempt was a ruse devised by the King himself with the help of Master Kim Che Geon– to test the security level of the Palace, Prince’s Yeoning’s capabilities (and loyalty?) and to have a showdown with Lee Yi Jwa.

The million dollar question though – did he or did he not know????
Did the King already know that Daegil was Master Kim’s pupil??
The King immediately picked up his sword and gave it to Daegil the moment our boy said his name! The implications of this action is huge!!!

That eyeball-to-eyeball first meeting between the King and Daegil was sooooooo INTENSE! 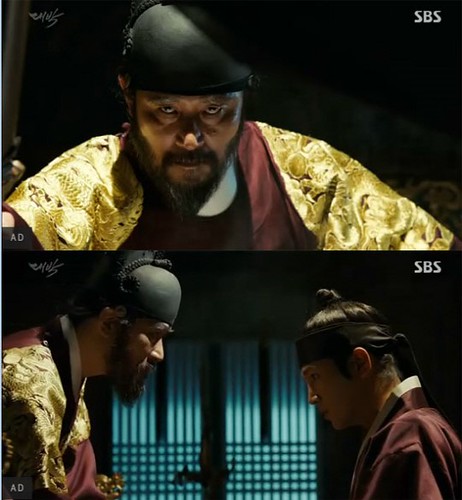 And the all-knowing King, even before Master Kim, knew that as they were talking, Dam Seo was drawing her arrow to shoot – and Daegil saved the King! 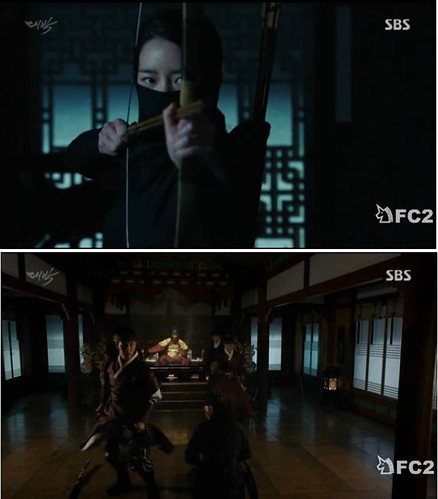 How did that slimy Lee Yi Jwa know that Prince Yeoning and Daegil would have the heart and ability to save Dam Seo (hasn’t she been training her whole life whereas our poor Gaddong-turned-Daegil only recently?)

As predicted by Lee Yi Jwa, Dam Seo got into trouble and Consort Suk was willing to save her as she owed a blood-debt to Dam Seo’s father. 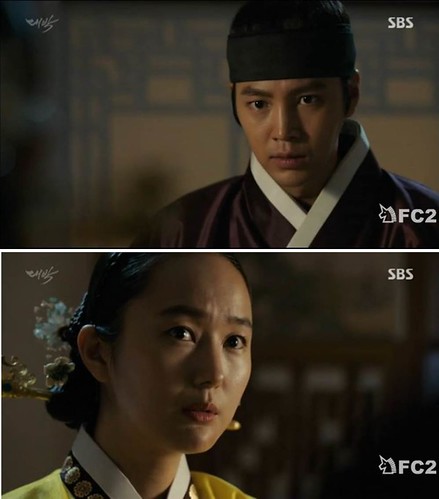 Sigh… I would willingly get hit by a thousand arrows just to have Baek Daegil tend to my wounds with those sexy sexy hands of his!

The brothers collaborated to save Dam Seo – a sign that they will in the future also act together to defeat that slimeball Lee Yi Jwa?

This whole episode, when Daegil was so coolly wielding his sword, fighting off all those Palace Guards, I noticed one very significant thing – he never, not once, drew his sword to hurt them – a clear sign of the kind of kind he would one day become.

Just like Suk and his eels!
(ok – I just could not give up the chance to sneak this part in!)

But I guess it was just as well – don’t think I would have been able to do Suk any justice writing about that (kkkkkkk).

And I think Tenshi is now so glad she didn’t assign me Episode 10 on hindsight – I would have utterly destroyed the review with my peely fangirling throughout. [END]

20 thoughts on “Thoughts on ‘Daebak (The Royal Gambler)’ Episode 9”