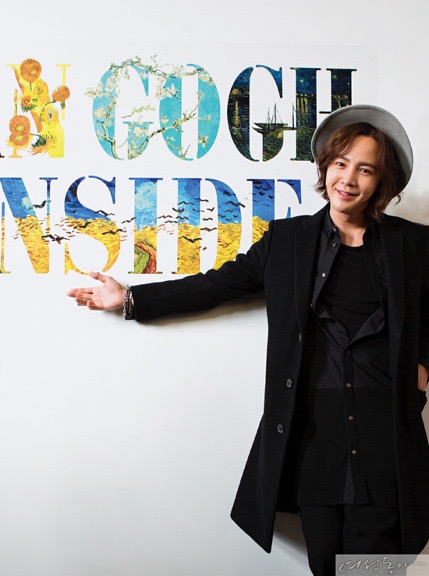 Having been through the toughest past 2 years, Jang Keun Suk will be making a return locally. He was touring in the art museum.

He appeared as the ambassador for the art exhibition of the most respected artist, Van Gogh. As he approaches 30, he carried with him sentiments from the past year, as well as his life plans as he stood on the renewed starting line.

An actor who fell in love with art. He created a sensation in Japan with his drama “You’re Beautiful” in 2009, with an outburst in popularity, the representative of Hallyu new generation “Asia Prince Jang Keun Suk”.

He attracted the attention of many through attending the opening of “Van Gogh Inside: Festival of Light and Music” on Jan 11 as the ambassador, after a one-year siesta from the public. One with great fashion sense, he wore a black coat with t-shirt and a grey hat, revealing his extensive knowledge and interest in Van Gogh, he said: “Respecting Van Gogh like an elder brother, I feel really honored to hold this role as an ambassador, introducing my favorite artist and his works to the world”.

Passion and challenging spirit resembling that of Van Gogh
“Whether an actor or singer, one should not be limited to any one field, but to be a comprehensive artist to the public, I admire Van Gogh for his endless passion, dedication and aspiration. Given the opportunity to introduce the works of my most respected artist, I accepted the role without any hesitation. Not just limited locally, but also to share the news of this exhibition abroad too through media and SNS”.

During his speech in the press conference, Jang Keun Suk said: “Introducing Van Gogh’s works through audiovisual aid, allowing the public to know him better, leaving a deeper impression through descriptions of his life prior to being an artist. The favorite among the many masterpieces of Van Gogh, is his painting in 1885 “The Potato Eaters”, a work revealing the life of poor farmer, portraying the reality of life”.

““The Potato Eaters”, painted without any colors, after Van Gogh learnt sketching techniques from a junior 5 years younger than him. The emotions he went through whilst painting this art piece, was exactly similarly to that of mine when I first debut in Japan market. I was not able to freely pursue what I wished, although inexperienced, it was the time when I had the most passion and zeal. I had such thoughts through “The Potato Eaters”.

Jang Keun Suk became successful as a highly respected star after entering the Japanese market with “You’re Beautiful”. He debuted in 1993 at the age of 6 as a child model, made his first appearance on TV in 1997 through HBS (now Channel CGV) sitcom “Selling Happiness”, but his name became known only through his role in MBC sitcom “Nonstop4” in 2003. Thereafter, he appeared in “Lover in Prague”, “One Missed Call”, “Hwang Jini”, “Hong Gil-dong” “Beethoven Virus”, moving away from the image of child actor, and became a well-liked Hallyu star across Asia after “You’re Beautiful”. He exhibited outstanding singing abilities through “You’re Beautiful” and began tour shows overseas. That’s how he got the nickname “Asia Prince”.

However things are not always smooth-sailing. In the subsequent local dramas “Mary Stayed Out all Night”, “Love Rain”, “Beautiful Man”, he did not reap as much success as his name values. He went through the painful experience of having his footage removed from the variety show “3 meals a day” last January even though recording were completed after the controversy around his tax issues.

He focused on his studies in University last year, completing his Master’s and Doctorate degree in Hanyang University Theatre and Film, filmed 4 short movies and spent time with fellow students.

“Having debuted at a very young age, I have been through a lot. There are many fond memories, but also things I do not wish to remember. There are always people who would give me warm love and encouragement no matter what situations I am going through. I am thankful for this opportunity to be the ambassador for “Van Gogh Inside” exhibition, a great start as I step ahead for 2016”.

Jang Keun Suk turns 30 this year. There are uncertainties with this new beginning, yet he hopes to sing with excitement and anticipation. Having spent probably the most difficult time of his life last year, he feels very different as he stands on the starting line at 30.

“I was sprinting ahead in my 20s, at 30, I hope to have time to reflect on my past, and enjoy the things around me. I hope to recover my pride as an actor, rekindles the acting life which I have been neglecting and actively pursue activities domestically. I have a bigger dream to progress on a bigger stage.”

Preparing to share his life as he reflects
His 2016 schedule is already fully packed. Mnet new program “Produce 101” which first aired on Jan 22 was the kickoff. He is the MC for this program where 101 trainees from 46 different agencies will go through various test selections, his first show in 2 years. Not only so, he would resume the screen in a drama in the first half of the year, and will complete his remaining semester of postgraduate studies. He also plans on establishing a Jang Keun Suk foundation, as a more systematic expansion of the charitable works he has done for his alma mater and other aid groups.

He has begun the plan of establishing this foundation since 5 years ago, “through this foundation to sponsor needy students, people going through hardships, colleagues going through economic crisis”. “Just like how I had overcome the difficult situations I have been through, the Jang Keun Suk who would view the world in depth”. Let’s hope his beautiful dreams will be fulfilled and reborn as a true Asia Prince.
[END]

11 thoughts on “[article] [INSIDE] Out of this World, Jang Keun Suk”