Eve Yap, a member of ECI, is an eel from Malaysia. She is a talented artist and the designer of popular LINE Sticker “Let’s meet Miss Eel”. She has several of JKS related art works. Her drawing has been chosen for JKS Birthday Photo Exhibition in Seoul. Here is her local media’s interview to her. We are happy her work gets such honour recognition. Congratulations Eve!
She is not only talented but also pretty, she is the one in the first picture wearing red. The highlighted are the words from Eve. Enjoy reading.
—
Original Source: http://rage.com.my/line-up-for-recognition/
LINE up for recognition 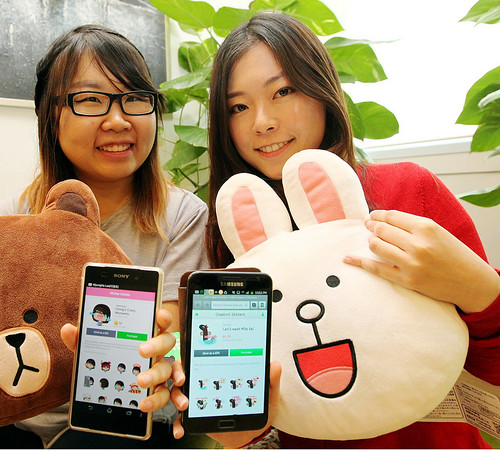 OPPORTUNITIES to make money are aplenty these days, but who knew that selling stickers could actually rake in the bucks?
That’s exactly the route mobile messaging service LINE Malaysia has taken, but with the interesting twist of making them in digital form.
“Stickers” are cartoon-like emoticons that users may utilise to better express their feelings in a text conversation.
“Stickers are one of the main features of LINE,” said Patricia Yeoh, LINE Malaysia’s public relations manager. 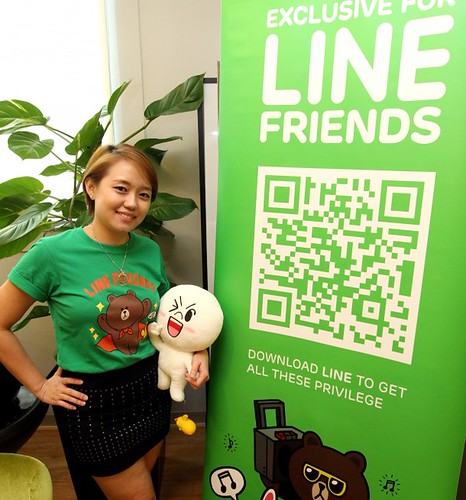 LINE Creators Market, a side project by LINE, is responsible for the design of the stickers.
“It is a platform for anyone – individuals or businesses – to create original stickers and sell them on the LINE Store,” Yeoh explained.
The very first batch of Creators includes blogger/illustrator Chong Chee Ching (better known as CheeChingy) and freelance designer Eve Yap.
“Having your designs displayed on established platforms like LINE Creators Market will increase your credibility,” enthused Chong. Not only can people capitalise on it being free and a new avenue to promote their work, but backing the cause also invariably leads to supporting local designers.
A LINE user herself, she joined LINE Creators Market the moment it was announced on Facebook as a means to expand her blog character and brand.
Chong believes that her stickers, titled “Ching’s Crazy Moments” (based on her blog’s cartoon character), are successful because she has an existing fan base from her blog cheechingy.com, which she started in 2009.
“My character was already developed and promoted before I uploaded it onto the Market, so that made it a little easier for me,” she said.
Yap’s stickers, “Let’s Meet Miss Eel” are stickers surrounding “a cute eel character”. It was created to represent a group of fans of Jang Keun-suk, a well-known South Korean actor/singer.
Yap, a fellow Jang Keun-suk fan, revealed that the Korean celebrity refers to his fans as “eels”. “I wanted to create something that my friends and I can relate to, which is how I got the idea for my stickers,” Yap explained.
But of course, creating a set of 40 stickers isn’t as straightforward as it sounds.
“I had to do a lot of research about people’s preferred emoticons,” Chong said. “I also referred to the existing LINE stickers to know what expressions to implement into my stickers.”
As for Yap, stickers have to be much more expressive than what words can convey.
“It’s also important to make your stickers relatable to users,” she added.
And that’s not the end of it, either. There is plenty of work to be done if you want to increase the sales of your stickers.
Chong – whose stickers are quite popular in Thailand – suggested that Creators promote their stickers independently so users will search specifically for them.
“The Market is an open market,” she explained. “So, your stickers may go unnoticed by users if they don’t know about you.”
Nevertheless, Yeoh said LINE Malaysia ensures that all Creators have an equal chance in getting their stickers noticed, regardless of how well-known they are. “We don’t advertise anybody’s stickers,” she said.
With more than 150,000 Creators from 124 countries and at least 15,000 sets of stickers to choose from, it’s hard to deny that this is a growing business model.
And here’s one for our homies: apparently, a large number of Creators are Malaysian.
“We hope that the Market goes viral so that more designers will know about this platform,” Yeoh said, adding that designers will now know where to showcase their wares.
Yeoh claimed that a lot of her designer friends merely cater to what the clients want, ignoring satisfying their own creative needs in the process.
That is a source of disappointment, seeing as the Market’s creative structure allows for the design of individualistic ideas that have revenue potential.
On the flip side of that argument, Chong believes that being a Creator isn’t exactly a sustainable career, due to the limited amount of revenue it generates. She reckons it’s more of a side income project and one for a designer to gain recognition.
She advises newcomers to take the initiative to submit their sticker designs without over-thinking.
After all, it would be a waste to not share with the world what you’re capable of creating, no matter how it turns out.

—
Eve’s works:
Her ‘Miss Eel’ design was used for his birthday cake [2014-08-03] Jang Keun Suk LINE
Her artworks in [Pics-2] 2014 JKS birthday sharing photo exhibition
[News] Eve Yap’s cute eel stickers ‘Let’s meet Miss Eel’ for LINE users are now available!
[Fan art] JKS Xmas and New Year painting
Here is the picture of Jang Keun Suk standing in front of fan’s art. You can see on the left side of the picture. There were two art work circled. The upper one is from Anita Lau, also a member of ECI, the down one is Eve Yap’s 🙂 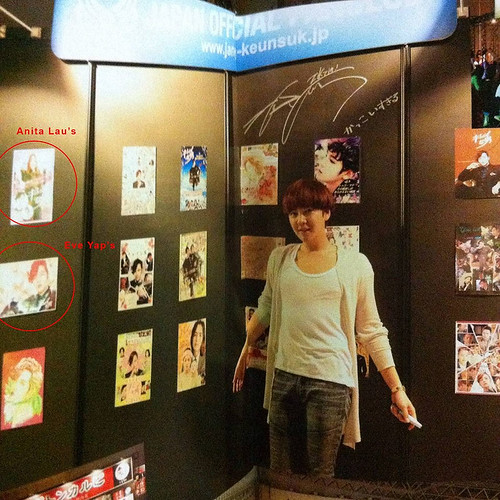